I look at the sign as we roll by: 150 miles till next services. En route from Oakland, CA to Boise, ID, Kat Bula, Aaron Guest, and I are in eastern Oregon, having just past through another seemingly 150 miles of no services in Nevada with the exception of a tiny town that apparently consisted of only a gas station/casino and a big billboard sign desperately advertising that land was available for commercial development. 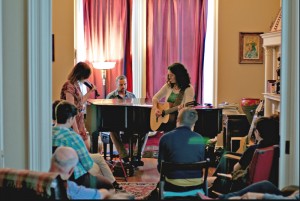 I’m sitting in the back seat, or Retreat Land as I call it. Yes, when you travel in a small, confined space for hours on end, even the different places to sit in the car take on characteristics and benefits of their own.  Retreat Land is the one spot in the vehicle to spread out, sleep, and take some time to yourself, trusting your companions in the front to get us where we need to go, and perhaps more importantly, play DJ. Suddenly, interrupting my thoughts on beautiful, vast open spaces, rural America, and the lives of the folks who choose to live out in this desert land, Aaron exclaims, “You all have to hear this Conway Twitty song. It’s amazing. And by amazing, I mean amazingly bad.” Conway wafts out over the speakers…. “Wait for it, wait for it.” says Aaron. “Now!”  And then, specifically 36 seconds into the song, Conway belts out “teeeeeuuuccchh the hand….” No, this is not just country twang singing. This is some kind of vocal I don’t even know what. But we all find it utterly the most hilarious thing we’ve heard. And so we listen again. And again. And again. Seriously people, you have to check this out. Conway Twitty. Touch The Hand. Album: The Very Best of Conway Twitty released in 2000. Apparently they got hip to this over at Conway Twitty land, because other versions of the song don’t have this little vocalization gem.

After driving for multiple hours on end, these are the things that we get a kick out of and bond over.

I can always count on a good tour with Kat and Aaron because we travel so well together. We listen to music, each taking turns introducing new songs or artists we have gotten into or just fall back on classic favorites.  When Aaron sleeps in the back, Kat and I blast songs from our childhood, belting along with Kathy Mattea, George Strait, Patty Loveless, Alan Jackson, and the Judds. But then, like any Coty Hogue trio tour, the ipod always lands at the same place. There has never been a tour, not even a short weekend run, where it doesn’t. We put on our listening ears and press play to begin the traditional Fleetwood Mac Rumours listening party. No matter how many times we listen to this album, it never gets old. Rumours will eventually lead to Tango in the Night. And then before you know it, we’re sitting in a Taco Bell drive-through actually bobbing our heads to Stevie Nicks singing Johnny Cash’s “I Still Miss Someone” reggae style. Yes, this happened.

Car travel also proves to be a great time to brainstorm names for our group. Let’s face it, The Coty Hogue Trio is not the most original title. This tour, road signs became fair game. Often, long silences were broken by someone randomly blurting out a name. Coty Hogue and Weigh Station Next Right, Coty Hogue and Sugar Bowl, Coty Hogue and Chicken Dinner Road. So far the winner is Coty Hogue and Six Percent Downgrade. Oh and Coty Hogue and the American Dream Gun Show (thank you Winnemucca, Nevada). (p.s. If you have a suggestion, send it to perpetualhoedown@gmail.com.) Not only that, but it gives Kat and Aaron talking material for my inevitable long tuning interludes during a concert. The joys of being a banjo player with only one banjo is I’ve got to tune just about every song. Set lists are actually constructed to how best make these transitions happen. Aaron finishes fine-tuning before I do. And he plays a 12-string guitar.

Speaking of shows, this tour was dubbed the ‘tour of house concerts.’ I’ve been lucky enough to connect with people up and down this coast that genuinely love folk music and will work hard to not only host concerts, but make sure friends show up to hear the music. Everywhere we went we had appreciative, listening audiences. I encourage everyone thinking of touring, no matter what genre you play, to make connections with as many people as possible. Ask if they’d be willing to host a house show. It can be incredibly rewarding to mix up playing random clubs with more intimate shows with everyone attending really listening and/or appreciating the music. And sometimes the concert is just the start.

In Forks, after playing our last show of the tour to a full house, the party migrated to the porch where we all took turns playing and singing songs, and not the ones you would expect. From Northwest music legend Linda Waterfall breaking out in the Pretender’s “Brass in Pocket,” to our own Aaron Guest surprising us all with a rousing rendition of “I Come from a Land from Down Under,” we sang and shared music with people in a small Olympic Peninsula community into the wee hours of the night (or morning).

Or rewind to San Francisco. I booked our tour to have three shows in the Bay Area: Berkeley, San Francisco, and Portola Valley, with a day off for fun. On our off night, we were invited to a couple’s house that had been to our concert for dinner.  We arrive at their place to be ushered in and immediately offered drinks.   “What would you like?” “What do you have?” “Whatever you want.” Really, I don’t think we could have thought of anything that they didn’t have. We then sit down to a steak and salmon dinner and wine. Yes, we were treated to a wine and dine affair. But they weren’t done. Here we are, a folk music group, and we end up having a 90s music nostalgia trip culminating to us all jamming out to the Crash Test Dummies over the home speaker system.

These are just a couple of experiences this tour that reiterated to me the importance of community and creativity. I’m lucky to be able to tour with an amazing band and we do treat it as a business. It is part of our livelihood as musicians. But it is also so much more than that. Touring is spending hours in the car bonding over music. It’s passing by incredible landscapes hundreds of miles longs. It’s getting to know towns and places you never would pass through otherwise. It’s meeting people and seeing friends and sharing food at potlucks and walking on beaches blanketed in fog. It’s waking up in 30-degree weather in Montana and arriving ten hours later in 80-degree weather in Seattle. But most of all its getting inspired creatively and smiling at the knowledge that no matter what, you have the skills and community to be able to do this over and over again, explore new places, and play music for yourself and others on into the future.

Published in the November 2014 issue of What’s Up! Magazine