Bellingham will get an early Christmas present with the first annual Bellingham Folk Festival Dec. 19-20, bringing dozens of folk musicians to town, as well as dance lessons, workshops and many other events. One musician who is going to be very busy at the festival is Coty Hogue.

Hogue originally grew up in a small town in Montana called Philipsburg (population of 850, according to a 2013 census). She relocated to Bellingham, and joined forces with local musicians Aaron Guest and Kat Bula, and those small town roots have played a big role in her development as a musician that specializes the folksy, roots, Appalachian, Americana and country music.

“I think growing up in rural Montana just gave me this real appreciation for nature. The national forest was basically my backyard,” Hogue said. “Also, growing up in a small town, I always was just a part of a community where people care about you and everyone really tries to help each other out. I think both those things are reflected in both the songs I choose to cover as well as the ones I write. I’ve noticed that I include a lot of images of nature in my songs, and there’s got to be something to that.” 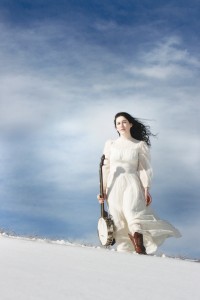 With that imagery playing such a large role in Hogue’s music, it is not surprising why Bellingham in some ways serves as her anchor. She originally moved to Bellingham from Montana to further her education at Western Washington University. The largest motivator when it came to pursuing a music career came when she took the Folk Music Experience class at Fairhaven College. There she learned to become comfortable singing in front of people, experimenting with different instruments and meeting like-minded locals who introduced her to the Bellingham folk scene.

“Just singing with other people helped me gain confidence in myself musically. I came to college pretty timid about that. I actually wouldn’t even sing in the shower I was so self-conscious about it,” Hogue said. “That class just ended up being the launching pad to getting out in the community and meeting so many incredible musicians that were so supportive and into creating community as well as opportunities to play out.”

Once she was finished with school in 2009, Hogue packed up her bags and headed east, to Boone, North Carolina. Nestled in the Blue Ridge Mountains, Boone has long been home to many notable bluegrass and folk musicians and Appalachian storytellers. While there, she received a Master’s Degree in Appalachian Studies, furthering her interest in traditional Americana music. It was also during this time that she  recorded her first full-length album Going to the West, and went on tour, which included numerous notable gigs at the 2010 International Folk Alliance Conference, the Subdued Stringband Jamboree and the Folklife Festival in Seattle. In 2012, Hogue released her second album When We Get to Shore, with Guest and Bula as her backing band.

When Hogue is not on the road, she makes a living as a music teacher, and typically teaches music lessons via Skype.

“When I was first asked to teach [through using Skype] I was a little skeptical because I wasn’t sure I was going to be able really see what was going on, but it has turned into a great thing and I have students all over the country,” Hogue said.  “It also keeps me learning new things and new tunes.  I just think about music more.  If I am teaching songwriting and giving feedback it definitely makes me think about my own writing and is often times inspirational. I find that I pick up the pen to write more when I am doing that kind of teaching.”

She will be leading an unaccompanied singing workshop as the Bellingham Folk Festival on Dec. 19 (a traditional technique she learned from Ginny Hawker, a folk musician from West Virginia), and another workshop focused on learning traditional songs Dec. 20. In addition, The Coty Hogue Trio (Hogue, Guest and Bula) will be playing during the festival on the 19th.

Hogue will also be playing a free show at the Bellingham Food Co-op on Dec. 18.

She added they are planning a tour of shows down the West Coast in January and hope to get into the studio and record a new album sometime in the next year.