On a brisk October afternoon in Iceland’s capital, two travelers, thousands of miles from home, pick a spot on a busy sidewalk to lay down their instrument cases, unlatch them and pull out a guitar and saxophone. People pass by without a second look as the travelers tune their strings and wet their reeds, blended into the background noise of a bustling city. But as the man on guitar begins to strum a bouncing rhythm and the woman beside him eases her voice out into the cold air, the pedestrians all around, parents with their children and young professionals on lunch breaks, slow their pace and eventually stop to crowd around these two strangers, hypnotized by the sweet sound that drowns out the chaos rushing around them. 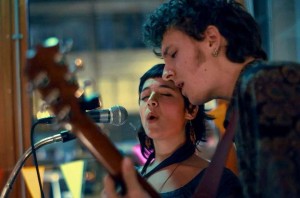 While their musical start was unexpected, you can expect beautiful music from this rebel/spirit/pop duo. COURTESY PHOTO

The Bellingham-based duo, Breaking the Spell, have been on something of an improvised tour in Europe for the past few months, busking their way from Reykjavik to Germany.

“We didn’t really know what to expect (performing overseas),” said Alexandra Doumas, “but playing anywhere from the street corner to a popular bar on a Saturday night has resulted in amazingly enthusiastic and positive responses from listeners.”

To those who are familiar with their project this should come as no surprise. Both Doumas and her counterpart Traesti Gudmundson are experienced musicians and performers, and their sound together is captivating – certainly capable of stopping you in your tracks on a sidewalk in Reykjavik.

Doumas said they classify Breaking the Spell as a rebel/spirit/pop act. “Rebel, because we encourage the uprising of a just and creative society, and we hit some nice grooves.  Spirit, because we strive to reach below the surface and affect people in a meaningful way.  Pop, because we are making music for the world. We want it to be compelling and accessible to anyone and everyone who gives it a listen.”

And just months after the release of their first album, Breaking the Spell is already sharing their music around the world, making new fans wherever they go. But this duo never imagined what it would become in the early stages of their creative partnership.

“I would say our music project together has been unexpected,” Doumas said about the evolution of Breaking the Spell.

“When Alexandra and I met in 2011 a slumbering poet awoke in me that had been lying dormant for the past several years,” Gudmundson said. “My last band, The Endorfins, were in full swing at that time, and being instrumental there was no room for my lyrical leanings. The Endorfins continued to be active in the Bellingham scene for the next couple of years, operating out of the Old Foundry, and I continued to write on the sly, sharing my work with Alexandra and practically no one else. “

After a 2013 trip to Iceland, Gudmundson returned and began writing and arranging songs with Doumas, piecing together the early concepts that would later become Breaking The Spell.

“At this point The Endorfins officially disbanded and I was devastated. However, it wasn’t long before my creative force took a new incarnation,” Gudmundson continued. “Alexandra’s enthralling vocal harmonies and saxophone leads brought my songs to life. Together we launched an Indiegogo campaign to fund our self-titled release, and with the help of our outstanding community of support Breaking the Spell was born.”

With both of their focuses on the project, they churned out their full length album last summer, which is available to download through their bandcamp page and iTunes. As soon as they return stateside they plan to record their second album, and hopefully enthrall the Bellingham scene for a time with their inspired sounds.

“What can I say? I am very inspired by the wild and tragic splendor of our existence,” Gudmundson mused. “This inspiration is charged and saturated into everything if you look at it right.”

When asked what the future holds for Breaking the Spell, Gudmundson put it simply, “Revolution.”

Published in the January 2015 issue of What’s Up! Magazine