Thimble vs. Needle: An open book

Conversations Over Breakfast, the second album by Thimble vs. Needle, is a work of strange beauty. A complex and layered musical amalgam of bluegrass, country, jazz and pop influences, the more you listen to the album, the more it unfolds. Kat Bula’s songwriting manages to sustain a fine balance between self-referential humor and poignant confession. And Chris Stainback’s haiku-like compositions and atmospheric accompaniment provide solid frame and texture to the album. A host of Bellingham’s finest musicians help to fill out the sound on several of the tracks. Without reservation, Conversations Over Breakfast is one of the best albums I have heard this year. Not just local. Best album anywhere.

Kat Bula is well known for her involvement in many aspects of the Bellingham music scene: booking at the Honey Moon, performing solo at bluegrass and folk festivals and playing with Big Sur, the Coty Hogue Trio and Biagio & the Argonauts. Chris Stainback plays bass in the always intriguing Scumeating and with his new band, Illogicians, purveyors of truly weird music.

I asked Kat about the differences between this album and the first one, released in 2009. “The first album was an experiment to see if I could make an indie pop record. I was trying to sound like I hadn’t just spent 13 years playing fiddle and singing harmony in bluegrass bands while my friends were developing candy-sweet vocal and melodic styles,” she said. 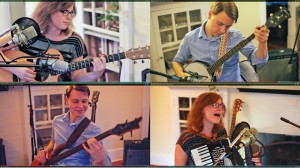 The new album builds on that sound and does have its poppy moments, she added. “But I’ve stopped fighting my background, and this record is much more a celebration of the musical variety that informs Chris and myself as artists – bluegrass, jazz, classical, noise, math rock, 80s country, 50s pop. Chris wrote three super-cool instrumentals for this record.”

Both play a bunch of different instruments, Kat added, and they brought in quite a few musical friends for guest appearances. “I think the end result is a lot more vital and genuine than the first record. Also, frankly, Conversations took a year to make. The first album took a month. There is a noticeable difference.”

Thimble vs. Needle was initially a solo project for Kat, and Chris was one of the guest musicians on several of the tracks. “When I started doing live shows,” Kat said, “I was delighted that Chris agreed to be in the band. He’s such a versatile musician, and an incredibly sweet human to boot. We’d played together before in another band called Pirates R Us.”

They started recording this album in November 2013 at Pat Gay’s Sleng Teng with the goal of releasing it in March. “That didn’t happen,” Kat said. “I think we finished up recording in May. But I am glad we took our time. I was able to spend more time writing in the studio.”

In regards to how her songwriting has developed, she said,  “I’ve spent the last five years learning to be less pithy and self-consciously cynical, and more real. There are still plenty of punchlines on this record, but I’m learning not to rely on that particular crutch. I’m also writing about more topics. I’m getting a bit less interested in myself as a subject.”

After listening to Conversations Over Breakfast, a remarkable narrative cohesion emerges from the songs and is reinforced by the musical themes. There is a subtle mystery of confession and revelation that plays out over repeated listenings. I ask Kat if this was intentional on her part or if I was reading too much into it. “I think that so much of the cohesion to what you are hearing comes from me or Chris and our musical sensibilities with each instrument. Six months ago when we finished recording the album, we were sitting on a pile of songs. It took some time to find something that felt like a narrative instead of a random selection of songs.”

A short time after we spoke, Kat sent me an email that bravely offered further explanation:

“While recording this album I began treatment for post-traumatic stress disorder.  I realized that what unifies many of these disparate songs is their various ways of grappling with trauma and its weird after effects. I am typically private about this stuff, partly to avoid triggering others. But as a society, we need to talk about it – not just our trauma stories themselves, but also what the psychological effects look like on a day to day basis. It is easy to miss the symptoms in our friends, especially when they can be mistaken for failures of character.

“I have pushed myself to overcome awkwardness about naming the everyday experiences – random crying after consensual sex, general difficulty connecting to other humans without hiding behind irony. I find the humor in it where I can, and try to avoid drama and moping. But the purpose of sharing any of it publicly is to encourage others to feel safer adding their stories to the conversation.”

It is important to emphasize here that Conversations Over Breakfast is a work of art that transcends the interior experiences that inform it. There is no denial or diminishment here. It is precisely the opposite: the music is an affirmation of radiant strangeness and beauty in a world often dark. It is redemptive and reassuring and, finally, hopeful.

Conversations Over Breakfast will be officially released Jan. 31 at the Honey Moon. Many of the guest musicians from the album will be sitting in for that night only. For more about the band, see their Facebook page.

Published in the January 2015 issue of What’s Up! Magazine