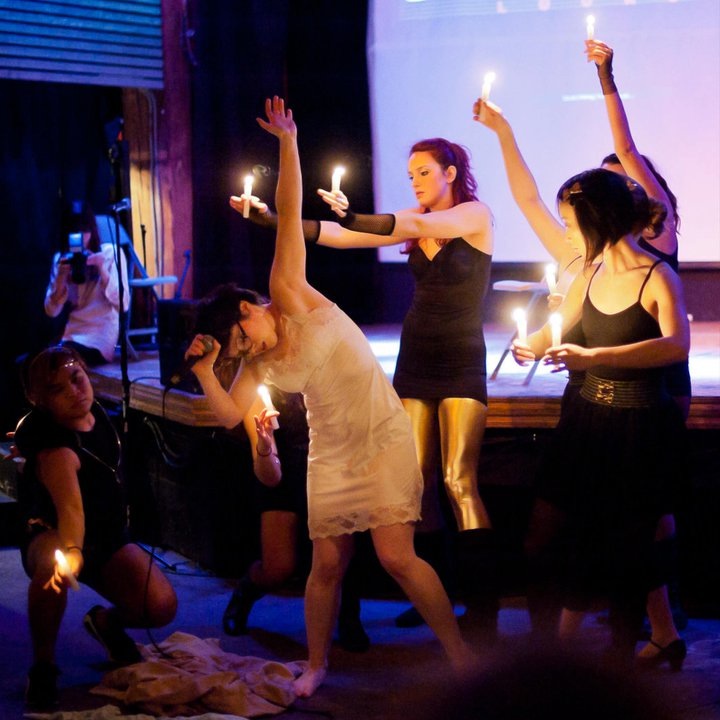 With a name like The Sexbots, one might likely imagine that the music and message contained in their work would be explicitly provocative. And yet the sole member of The Sexbots (Ilima Considine) has managed to create a discourse about sexuality that plays with those taboos in ways that both embraces and questions the role of sex in this day and age.

Ilima started work on The Sexbots project back in the late 2000s as a more rigid musical outlet in contrast to her shifting work as a chorus singer for various hip-hop and electronic artists, and after her original band Childhood Friends, in which Ilima played cello and violin.

“It’s a Blade Runner reference although the term is not used either in the move or the novella, Do Androids Dream of Electric Sheep? It was because I hadn’t had a boyfriend in three years, but everyone was treating me like a sex bomb at shows,” Ilima explained.   “Like the replicants, I could look the part and fake it, but once you started asking questions, it was clear that I was clueless and didn’t know what was really going on.”

It started off as a duo, Ilima emerged as the central member of the group and in opposite of before, flipping roles from working on others’ projects, to having others provide work for The Sexbots. Ilima has worked with various producers G-Space, DJ Ceez, Stereospread, Air Fortress, Natural 20, and many others. This ever-changing cast of musicians keeps every album distinct in music, while cohesively united by Ilima’s amorphous, yet unmistakable voice.

While her other bands have ranged from experimental rock, to indie, to electronic – and even doing neoclassical music for modern dance companies like Keyon Gaskin and the PDX Dance Collective – The Sexbots sound as Ilima begrudgingly shorthands like “Asian Mom Björk meets Portishead.” Begrudging in the sense that they are very common references made by music publications, and not at all because they aren’t partially inspirations.

“I don’t try to sound like any of the bands… When I was younger I listened to all kinds of music… Morrissey really taught me a lot about songwriting. But I try to do my own thing and just try to stay emotionally true to myself.”

And just by listening to The Sexbots you can hear the difference. Ilima runs the gamut from soft spoken word, to effervescent cooing and singing, and everything in between. All on top of a range of instrumentals drawing inspiration from EDM, avant-garde music, trip-hop, and sometimes even indietronica. It’s a combinations that both comforts and unnerves the listener in the best ways possible.

Comforting because a lot of The Sexbots’ work involved grooves and danceable beats, but underneath lies often conflicting messages. On her recent album The Girlfriend Experience, Ilima emits several variations of her real self; some being a hyper-sexualized parody of how people online view female-bodied individuals, others a reflection of the more anxious and interpersonal side. Sometimes these ideas pop up on the same songs like the single “Summertime.”

This track actually proved to be quite controversial in several ways. Firstly in its juxtaposition of a time we normally associate with happiness hinted at by the chorus and title of the track, but when listening deeper you notice the lyrics are about a friend who committed suicide and Ilima trying to mentally deal with it. Secondly because of the video included with the song, which depicts an almost voyeuristic beach excursion that evolves into a very intimate moment near the end.

Ilima does music videos for nearly every song under The Sexbots name, many including artistic displays of nudity and sexuality in many forms. “I was really surprised at the backlash that the video got,” she stated. “It wasn’t half as sexually explicit as what you’d see in the mainstream anyways…”

And in no way is it nearly as objectifying as mainstream music videos. In fact Ilima is using the human body not to catch the attention of the male gaze, but to create a dialog about sexual identity and orientation. Many of the videos on The Sexbots’ YouTube page display performance art style videography with explicit oppositions to the ideas of gender norms, and provide a lot of ambiguity about characters in the videos’ sexualities and desires.

Overall the message that Ilima hopes to spread is positivity. Not only within our bodies, but also within our communities. Ever since an eye-opening and unpleasant experience with a specific band member from a bill that Ilima was on, she has strived to make every show The Sexbots plays a LGBT+ safe space zone, and wants the audience to feel comfortable and accepted.

See The Sexbots live, which includes fantastic backup dancing and a performance by experimental hip-hop artist Worshiprr, at Rumors Cabaret on July 9 at 9 p.m. For more about the group, see patreon.com/thesexbots.