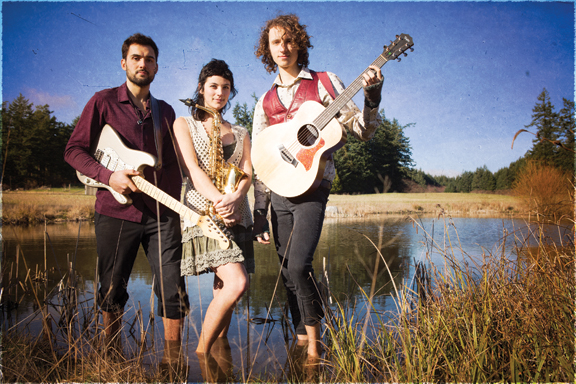 The Living Arrows have welcomed a new chapter in the music with open arms. As the year has evolved, so has the free spirited trio. With everything Traesti Luther, Alexandra Doumas, and Loren Schaumberg have learned from their travels and from each other, the three have a new mission.

“We want our message to allow people to feel safe to look into those humanitarian issues that are not so comfortable to look at,” said Schaumberg.

The band hopes their music will not only bring the community together but also open up a conversation about the hardships of today and yesterday in a compassionate manner. They want their music to move the audience through dance but also through the awakening of subconscious thoughts and feelings in response to the lyrics.

“Through your (directed at Luther) honesty and vulnerability is what allows people to access something that may be turned off or sleeping through this time of hardness, intensity, and cynicism. We just want to be gentle, connect, and to be true,” said Doumas.

The band’s intentions are to share their music, not to compete with other musicians and sell as many copies of their records possible (in fact, their music is completely accessible and free). Traveling from places such as Iceland and Port Townsend is where they grow most as musicians and how they share their lullabies with communities all over the world.

Doumas and Luther spontaneously traveled to Iceland as duo Breaking the Spell to connect with Luther’s Icelandic roots and music is what gave them a reason to be there. The two weren’t aware they were becoming a band until they decided that the sounds they made together should be recorded.

After releasing their first album, the duo wanted to expand due to a yearning of wanting to incorporate more sound. Luther and Schaumberg have a 14-year history of playing music together in an all-instrumental band entitled The Endorphins.

Knowing that the contrast that Schaumberg could contribute, Luther figured that adding that diversity would be compatible with what the duo had set up so far. Schaumberg was invited into the band, creating the new textures they were seeking.

“A lot of what I do is rhythm, the structures and constants of the songs with strumming and bass. The way Alexandra and I are fusing together is that she is the counterpart of that,” said Luther. “The sounds he produces are extremely varied and punctuated throughout the movement of the songs. It’s this whole other dimension; he’s bringing something there that wasn’t there before. It’s like a wild card aspect.”

“I’m thinking a lot about the note patterns whereas Loren is thinking about the sound flavors—what the sounds are physically made of. In that way, we think on three different dimensions of music,” said Luther.

“With three, it allows more of that multidimensional, textural landscape where more can be happening than just the basics that comprise the song. It’s nearly impossible to do that with just two people due to the amount of mouths and arms we have,” adds Schaumberg.

“(Laughs) Yes, that is limiting. He also makes the creative force exponentially bigger,” Doumas said. “ Each human is so vast.”

When Schaumberg joined the band, their approach to creating music changed along with their band name. Their new album, Roots and Wings, which will be released this fall, is the evolvement the band has made since Breaking the Spell.

“We just threw together our first album in a handful of weekends.  That project was also led a lot by me,” Luther said.

“Since then we’ve had a lot more intention and collaboration in the song writing as well as a lot of the aspects that went into the sounds,” Doumas adds.

“I also feel that in this record, we were able to break into a fullness of sound but while maintaining a lot of space within the composition and the songs,” Schaumberg concludes.

With the contrast that Schaumberg has added to the band and as the three take on new experiences in life, Breaking the Spell no longer felt like it fit what the band intends to do. Not only has their mission and message of their music changed, the way they view and take on life’s challenges and triumphs also has a big influence behind their new name.

“The name had to be an expression of what we were trying to accomplish in our music as well as in life. We’re all activists at heart and have a strong yearning to see humanity awaken. Breaking the Spell is about becoming awake but then it felt as if we were focusing too much on the struggle,” Luther said. “The Living Arrows, to me, is that we’re piercing through the heart of the matter. We’re soaring, arriving, and bringing life. Not just breaking the old paradigms.”

The band’s motto is ‘the earth shall be whole and healed once more’ because they believe that you have to say what you want to happen, not just what you don’t want to happen.

“You can’t just spend life chipping away at this stone wall that imprisons us—” begins Luther.

“When instead, you can chip a hole and plant a tree,” interjects Schaumberg.

Last month, the band hosted their release at Shakedown, immediately following; they hit the road to Colorado (where Doumas is from) on their first formal tour.

On this tour, they hope to continue to spread their message and gain inspiration from other people/musicians that they will connect with. The band couldn’t be more thrilled as the moments before, during, and after traveling spark one of their favorite feelings described in their song Living Arrows.

“It’s about being excited to be where you are now and later. You have to be away in order to come home and it’s a lust for both of those things,” concludes Luther.

Roots and Wings will be available on their Spotify and also on their website at http://thelivingarrows.com.