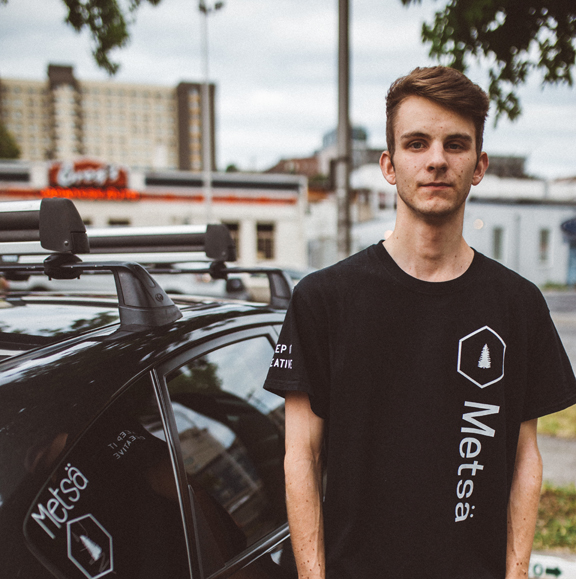 Perfectly positioned between the mountains and the sea, the natural surroundings of Bellingham provide the ultimate source of inspiration for local artists, from photographers to painters and anyone in-between.

Electronic music artist Maxwell Prendergast does just that, incorporating organic samples with synthetic sounds to successfully convey strong emotions that are a driving force behind his music. Emotions that create an incredibly human connection through the use of technology.

Prendergast, a computer science major and junior at WWU, has recently surpassed a year making music under his musical alias Metsä.

“I’m still in shock with how everything has gone,” Prendergast said. “I started this in my dorm room a year ago as a way to fill time… I’m a very shy, quiet person in general and I find it hard to reach out to people, but through music I can have a voice.”

Musical involvement started for Prendergast as a kid in his hometown of Issaquah, where  he took piano lessons and tried his hand at guitar, but neither of them clicked.

“What I really wanted was to play drums,” Prendergast laughed. “That wasn’t going to happen in my house though so I never did. Maybe that’s why I love to focus on drums and percussion in my music.”

Prendergast started entertaining the idea of music after he fell in love with Flume’s self-titled album in 2012, but didn’t get serious about making music until the end of his freshman year.

“I just needed a creative outlet,” Prendergast said. “I enjoy drawing and cover art as well, but music just clicks with me on a personal level. I feel like, for me, it’s a natural way to get my feelings out.”

It was in a forest in Fall City around Autumn of last year, that Prendergast played his first set as opener for now friend and fellow DJ, Brandon Densley.

“I remember watching this guy play his set and thinking, ‘Dang, he is totally killing it,’” Densley said. “I went up and talked to him afterward and eventually invited him to join the collective.”

“The collective” is an online group of electronic music artists from all over the world called Fanservice. The group is comprised of multiple artists that support one another not only in music, but in life.

After joining the collective, Prendergast became more involved. He released his music on a personal Soundcloud and changed his name to Mestä, the Finnish word for forest. Prendergast began gaining a small following of about 100 listeners, and over that Christmas vacation he made the decision to invest in sound equipment.

He began performing every Tuesday at the open mic nights held in the Underground Coffeehouse on campus, and also challenged himself to consistently create, release, and perform a new song every week.

“When I play live I cut up all my songs and set them up so that I have control over all of the components, so if I miss anything it’s obvious that I messed up,” Prendergast said. “It was terrifying every week and my hands would always shake, but I kind of like how the novelty of sharing your music live doesn’t really wear off.”

Prendergast’s music gained recognition from his weekly performances, and the word spread. He was featured in an online blog, “Smoothietunes,” after the release of his EP Icicles and he saw his following spike up to 1,000 listeners. Then, around April, Underground Coffeehouse Coordinator Karimeh Dameshmandi offered him the opportunity to play a 45-minute set for an artist showcase.

From there Prendergast has only continued gaining ground, playing shows at the Make.Shift, The Crocodile back bar, El Corazon and The Wild Buffalo to name a few. There are now over 3,800 listeners who follow Metsä on Soundcloud, with some of his tracks surpassing 30,000 plays (ie: “Hold Me” remix, “Trails,” and “Tolerance,” a collaboration with Olmos  that hit over 110,00 plays on Spotify).

However easy it is to get swept up in exposure, Prendergast strives to remain level-headed, balancing the increasing demands of school and music.

As for the near future, Prendergast has plans to perform at The Wild Buffalo Nov. 19 and Make.Shift  Dec. 9. There also may be a possible EP in the works.

“It’s hard with the attention span that people have with music, albums tend to get overlooked online since no one wants to click through an entire CD,” Prendergast said. “But I’m developing a creative vision of what I want to incorporate so I can deliver a complete story.”

Looking back on the past year as well as towards the future, he said he just wants to keep making music. “To capture emotions that I can’t put into words and to make other people feel things,” Prendergast said. “I hope if you listen to my music that it really connects with you.”

See Metsä Nov. 19 at the Wild Buffalo and Dec. 9 at Make.Shift. For more information, check out facebook.com/madebymetsa.

Published in the November 2016 issue of What’s Up!