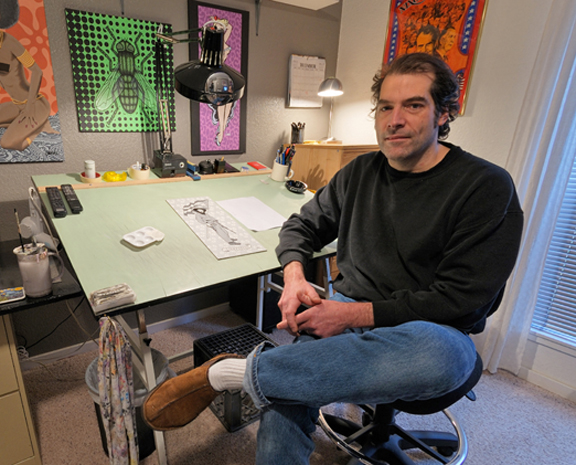 I’ve known Jim Blanchard since he moved to Bellingham the first time back in 2001. His wife, Diana Young-Blanchard, is the singer of The Dts, so we ran in the same circles and connected over music and good times. I always knew Jim was a great artist; he did a cover for the magazine back in 2004, I believe, but I, honestly, never knew the depth of it. When Fantagraphics sent me a promo copy of Jim’s book, Visual Abuse, which covers his design work in great detail, I was floored to realize that the icon posters and album covers I fell in love with 25 years ago during the explosion of the Seattle music scene were his. Past that, though, the book showcases his incredible depth of vision and creativity (see review on next page).

And with that, I introduce you to Jim Blanchard.

Who are you and where did you come from? Tell us a little about yourself.

Let’s see, I was born in Houston, Texas in 1965, and spent formative years in Alaska, Ohio, California, New Mexico, Oklahoma, and Norway. My father was an engineer for Phillips Petroleum. I have a Bachelor of Fine Arts degree from the University of Oklahoma, which I received in 1986. In 1982, age 16, I edited and published the first issue of Blatch, a punk rock and graphics zine which lasted 14 issues and ceased publication in 1988. I moved to Seattle in 1987, and worked a number of jobs, including: negative retoucher at a print shop, copy shop geek, cover artist for books and CDs and records, editorial illustrator for magazines, technical illustrator, comic book artist, silkscreen poster artist, art director for Fantagraphics Books, and inker for Peter Bagge’s acclaimed Hate comic series. Since 2003, I’ve dedicated most of my time to large scale graphic art paintings, and commissioned portraits. I’ve been a freelance artist with no day job since 1996.

You recently released Visual Abuse through Fantagraphics. What inspired you to put the book together?

It was in bubbling in my head for over a decade. The impetus was that I had this 20-year body of work (1982-2002) that I felt no one had really seen, unless you happened to own it in its sundry original form, which was comic books, weird little art books, magazine illustrations, record covers, flyers, posters etc. So the idea was to collect and arrange all this stuff into a coffee table book with a written narrative to provide context, and give the art some new life and hopefully get it under the noses of people who had never seen it. Thankfully Fantagraphics was on board for publishing it. The format of the book was inspired by the book The Lowbrow Art of Robert Williams, which divides Williams’ work into chapters based on styles and mediums, and adds a text introduction to each chapter. I’m happy with how Visual Abuse came out, and very glad to finally be done with it! It was a helluva lot of work: I scanned all the art, wrote the text, and designed the whole book cover to cover.

As someone who has designed for 30 years, what has been a common thread through your work from the beginning?

I guess I see myself as more of an illustrator than a designer, even though I end up doing my share of “design”/text-based art. A common thread is the attention to detail. I’ve been obsessed with detailed texture—pointillism, cross-hatching, tightly rendered lines—as far back as I can remember. As a five-year-old, I would fill entire sheets of typing paper with dots, little ovals, etc. Not sure where that desire comes from. I might have a loose screw.

And with that, how has your work evolved and grown?

After years of cranking out art, your “chops” become second nature, and it gets easier (even if your eyesight worsens!). The last 10 years, 90% of my art has been portraits, either commissioned paintings/ink drawings or magazine illustrations. So my output has sort of been funneled down to portraiture, which suits me fine. I’ve been creating portraits as far back as high school. I was a dedicated “psychedelic underground comix” type artist for years, but pretty much didn’t make a dime on it. There was also very little cash to be made doing rock LP covers, flyers, and posters. I still do rock-related art, though, and I still get a kick out of it. I quit comics for good in 2004, after my comic with Jim Goad, Trucker Fags In Denial came out. Making comics is hard work, and it was never my strong suit, so I don’t miss it.

Of all your works, what is your all-time favorite piece? (Editor’s note: My favorite was the legendary Coffin Break album cover.)

Hard to pick one. I’m too close to it to really have an objective opinion. Just for the hell of it, I recently did a gigantic acrylic painting of Whitman Mayo, who played “Grady” on Sanford and Son, and was very pleased with how it came out.

What prompted you to start designing?

I had the art bug very early on. I lived in Norway age 5 until age 10, and without the distraction of television, I was very busy making models and creating artwork of some sort. I had a bitchin’ big set of magic markers that I wore out. My grandfather on my Mom’s side was an accomplished oil painter, so perhaps there’s a genetic predisposition. As a young kid I was definitely inspired by Mad magazine, Marvel comics, and Topps Wacky Packages stickers.

You and your wife, Diana Young-Blanchard, moved back to Bellingham a year or so ago after having lived outside of Seattle. What brought you back to town? Where was the first place you went to after you were settled in?

It’s great to be back in Bellingham. We lived here from 2001-2006, and left for a teaching gig that Diana landed at Mt. Si High School in Snoqualmie. We lived in Maple Valley and North Bend for 10 years, but eventually got tired of the isolation. We have lots of friends in Bellingham, so we pulled up stakes and moved back. First places I hit were Aladdin’s Lamp, Casa Que Pasa for a tater burrito, and Boundary Bay for a pint or 3.

It’s the perfect Sunday morning, what are you doing?

Drinking strong coffee, followed by a greasy breakfast and maybe a beer. Lying in the sun for an hour. Throwing the tennis ball to the dog. Perhaps a walk around Lake Padden or the Marina.

What one artist has had the greatest influence on your work?

Impossible to pick one, but the Underground Comix artists of the 60/70s left the biggest impression on me. That would be Robert Crumb, Robert Williams, Rick Griffin, Greg Irons, and S. Clay Wilson. That stuff blew my teenage mind and made me realize that you really could draw anything. The Mad magazine artists subverted me before that: Jack Davis, Wally Wood, Will Elder, Don Martin, George Woodbridge, Al Jaffee, among others. Also 70s Marvel comics artists like Jim Starlin, Berni Wrightson, and Paul Gulacy. I’d have to add Salvador Dali, Albrecht Durer, and M.C. Escher to the list, too. Lotsa influences as I was always a collector and cultural sponge.

You were around for some of the glory days in the Bellingham garage rock scene. What band would you like to see again?

I saw a bunch of shows at the 3B Tavern, and I can’t remember a single one that sucked. The sound quality in that room was fantastic and the “vibe” there was unique, unlike any rock club I’ve been to. I really miss that place and would love to see practically any band play there again. I remember turning around for one last look as I was leaving the night of the final show (New Years, 2005): the air was filled with cigarette smoke, Fed Ex was cranking out the rock, bodies and beer were flying around. I knew it was the end of something special.

What was the last great book you read and what drew you to it?

I’m mostly drawn to biographies and non-fiction, not sure why. Recent good ones would include: Texas Crude by Ken Weaver, a hilarious compendium of vulgar Texas slang with illustrations by Robert Crumb; The Friedkin Connection, an autobiography by director William Friedkin; and Ken Hughes’ Chasing Shadows, a fascinating investigation of Richard Nixon’s illegal meddling in the 1968 election, which he won by a narrow margin. Reminds me quite a bit of Trump’s alleged meddling in the 2016 election, both via a secret foreign government connection.

What’s next for you and your work?

I’m working on a painting of character actor Sid Haig at the moment, after that the portrait queue includes: Denzel Washington, Bob Wills, Nina Simone, Rod McKuen and Chuck Berry. I plan on spending some time in 2017 promoting my Visual Abuse book. I’m also assembling another book of vintage material for Fantagraphics called Meat Warp, which will collect my twisted, quasi-pornographic collaborations with artist Chris Kegel.

Thanks for the hype. Peace Out, Bellingham! Buy my book!

Visual Abuse, the new book by legendary illustrator Jim Blanchard, is a glorious look into Jim’s work, and mind, between 1982 and 2002. Broken into roughly four categories of his work – music, illustration, comics and paid portraits – the former Fantagraphics art director shows his skill and depth as an illustrator tuned with the hue of his twisted mind. 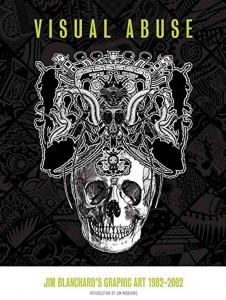 His work in music was my personal favorite. It covers from his early illustrators as a kid in Oklahoma, putting out the ‘zine Blanched to posters during the Seattle scene explosion as well as album covers. Mixed in with everything are photos and blurbs by the likes of Charles Peterson and Bruce Pavitt (Sub Pop), giving his work context. Fans of that era in the Seattle scene will get lost in these pages – posters for Black Flag, Husker Du, Nirvana, Soundgarden, The Fluid (a show I attended) and tons more, it feels like a trip down memory lane of some of the scene’s most memorable shows.

His album cover art is equally as memorable. I didn’t realize Jim was behind the Skin Yard 1000 Smiling Knuckles and Coffin Break Psychosis covers (two of my favorites from that era). I found myself going through the book thinking, “Holy shit, he did THAT too?!”

While I’m the music nerd and was automatically drawn to that chunk of the book, his illustrations, comics and paid portraits are equally amazing – included are covers for The Stranger, work with Fantagraphics and even a cover for What’s Up! (punk rock jukebox from 2004).

Amongst all the work, though, there’s a thread that is Jim Blanchard’s bizarre genius. Sometimes creepy, sometimes sexual, sometimes funny (often times all three), his work has a look and touch to it that makes it a Jim Blanchard; some twist that’s unsettling in some way, making even the most beautiful, just a bit dark.

While all of his works are visually stunning, the book itself is gorgeous – perfectly laid out and a great vehicle for Jim’s mind. Check out more about Jim’s book at fantagraphics.com/visualabuse/.