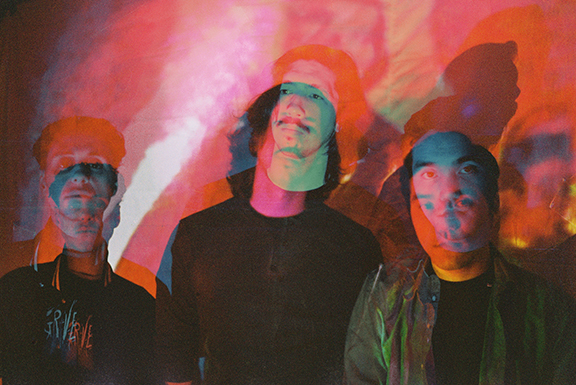 Seattle Synth Punk band, Charms, is like watching the sunrise on a rainy morning. It’s dark, yet there’s this hopeful beam of light breaking through. The lyrics are somber and gritty yet the synths provide such a different—almost animated—energy. It’s music that can make someone reflect, cry, laugh, or dance.

E.J. Tolentino (vocals and lead guitar), Josh McCormick (synth), Ray McCoy (drums) are not classically trained but that doesn’t limit them from mastering the perfect mix of heavy, euphoric sound.

“Everything we write feeds off of everything else we write. Our natural sonic-state is high energy to the point of wanting a climax or a release. It’s that “want” that fuels anxiety, which puts me in a dark headspace and the bleak lyrics, follow close behind,” E.J. said. “The lyrics are mostly about past relationships, family, friends, and fears. They’re words that recreate individual environments from when I was going through some type of hardship.”

Rather than being focused on making the song sound perfect, the group prefers to make the song feel real by taking the emotions from their life experiences and conveying them through the sound they create.

“I’d say it’s our approach that makes it personal and unique. I don’t think any of us in the band would say that as individuals we are good musicians. None of us are classically trained nor do we practice scales or rudiments,” E.J. said. “In fact the only class I failed in college was music theory. Our approach comes from knowing what feelings and emotions we want conveyed through sound. It comes from experimentation and discovering that exact dissonance or brutal pulse.”

Collaboration is a major component to writing the music and also in live performances. Visual artist, Kevin Blanquies, performs with Charms during their shows. Kevin’s live feedback loop projects lights that respond to the tempo and rhythm, adding a new level of stage presence.

“The first time he showed us video of his work we knew we wanted to work with him. Having a live feedback loop of video creates a new visual show for every individual performance,” E.J. said. “Instead of pushing play and having the same video projected every time, we can instead create a unique display of visuals through our every move. Kevin also knows our songs front and back so the lighting is triggered by him to sync up with however fast or slow we choose to play that night. He really is performing live with us. The result is a chaotic overstimulation of sound and sight that we couldn’t be happier about.”

Charms have found their prime visual component for their shows but what’s really important to them is the accessibility to connect with their audience. They’ve played at Bumbershoot and Capitol Block Party. However, E.J.’s ideal live show wouldn’t be at a major music festival.

“(My ideal show would be) playing in the basement for an all-ages house show. It needs to smell awful and be really sweaty. Playing festivals is fun but it’s the least intimate setting for experiencing live music,” E.J. said. “I grew up going to DIY house shows and doing stupid things with friends and the bands but having the best times ever. Shows like that are where you make real human connections with people. You can definitely have those experiences at festivals too but they are rare.”

While Charms enjoys connecting with people through interacting with them at shows, they also hope people feel a release from or a way to cope with life’s hardships when listening to their music since music has helped them heal.

“(What helps me cope is) knowing that things can be better. Staying focused on a positive possible outcome is sometimes the only way. If you veer off in the other direction, you could find yourself falling into a dark hole that doesn’t have a bottom,” E.J. said.

Charms will perform at the Alternative Library on June 10. Their album release show for their first full-length album, Human Error, will be at Chop Suey in Seattle on June 15. Human Error comes out June 16. For more about the band, see https://charmsrock.bandcamp.com.