West Coast Meets No Coast: A poetry report from the Heartland 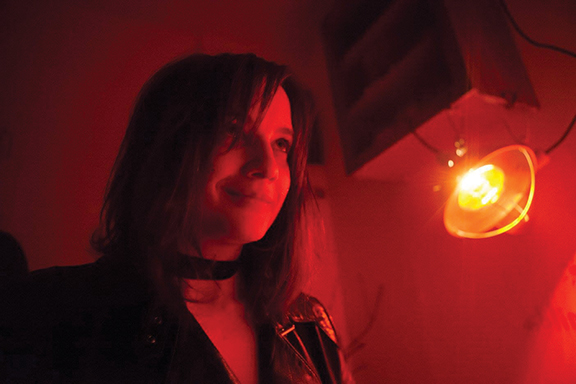 The first thing I noticed about Nebraska was the horizon. Without the clear contrast of mountains and foothills, a Midwest sky spills out like a glass of wine on a dining room table: endless, impossible, stretching to fill every space. If I’m going to be honest with myself, I wasn’t expecting too much of the landscape. Sure, the Boss immortalized it, but a voice like that can make anything sound sincere.

And that was the real surprise, the sincerity of Nebraska. Lincoln, to be exact. After a brief rest at my friend Ryler’s apartment, I made my way to the workshop I was teaching that evening, at a fantastic local bookstore called Francie & Finch. I was tired and nervous. I quickly dropped off my bags and began my pre-show/pre-class ritual of walking around the block till the last possible moment. When I came back, I found a table full of bright, observant faces, and got even more nervous.

Full disclosure: I have serious Imposter Syndrome. It doesn’t matter how much I’ve prepared; at the beginning of moments like these, I have to actively fight the feeling that I’m a fraud and soon everyone will know it. Luckily, I’ve grown quite familiar with the sensation of self doubt and have developed my own defenses to resist it. When I was a kid, my dad gave me a piece of advice that I return to constantly, “Jessie, people only know what you tell them. If you’re nervous, just don’t say you are, and no one will know.”

And so, pushing down a boatload of insecurity and trying to steady my breath, we began the workshop. And they were beautiful, each and every student, sharing where they were at with their work, telling each other why they were writing, or, who they were writing for, and confessing to their own ambitions and struggles. It’s trite but entirely true: the best part of teaching is watching students connect with each other. Personally, my goal is always to create the space but then to step back and let the class direct itself. And direct they did, sharing work from their quickly dashed together free writes, inviting each other to writing groups, and just generally affirming one other until I got dangerously close to shedding a few tears, a mark of their compassion and the tell tale sign that I’ve become both exhausted and inspired.

My next event was a show with a local musician Hana Zara at the Rock Island Social Club. It was put on by Common Root Collaborative, an amazing nonprofit that is doing incredible work in Lincoln. I have another confession: I had a lot of pre-conceived notions about what this show would be like. This was Common Root’s first poetry and music event, and, having coordinated literary events for almost half my life, I figured it would be a little rocky. But I am here to tell you two things, Bellingham: one, that I was dead wrong, and two, that poetry is alive and well in Lincoln.

Stepping into the venue with my parents (who had surprised me by coming up from Chicago!), I was greeted by quite possibly the friendliest people in these great United States: Bob, Donna, and Lacey. I know I can exaggerate, but believe me when I tell you that I have never been treated so well by the organizers of an event, and I’m often treated well! I hadn’t been in the door even five minutes, and they had already set up my merch, bought two books and given me the rundown on the order of the night. It was an event coordinator’s dream! A quick word about the venue, the Rock Island Social Club: it’s delightful as hell. The bartender (who told me I should “be very proud of myself” and then I almost cried in a bar, again) was from Seattle and so kind, and the drinks were strong. Anyone touring through Nebraska, for music or otherwise, should absolutely check them out.

The show was a hit, Hana Zara was astounding, and I got to secretly watch someone I didn’t know read my book throughout the show, a delight I’ve never experienced that made me Christmas excited on the inside. I’ll tell you something else too, the Midwest knows how to compliment a lady. Checking my hair in the bathroom mirror, I was greeted by none other than the musical act’s mother who informed me that “(she) hadn’t been too sure about me, didn’t know if she would like my stuff at all, but, after hearing a poem or two decided she did like me after all.” I almost burst out laughing, not at her, but at the refreshing bluntness of her honesty. Can we have more of that in the Pacific Northwest, please?

There were two more stops on the tour, a visit to a high school poetry club and a house show. The high school workshop was perfect in its awkwardness. I read some poems, they grudgingly asked some questions, and then I got to listen to them perform. When did high schoolers get so talented, y’all? Poems about identity, borders, the lost intimacy of sending mail to one another, these young adults know how to articulate themselves in ways I wish I could have at their age. Toughest audience I had all week, but I think they liked me, and, more importantly, I loved their work.

The house show fell on the night before we flew out. I almost cancelled, feeling sick, tired, and more than a little hungover. I’m so glad I didn’t, because this house was the most gorgeous amalgamation of hippie commune meets visual art meets experimental music meets that same Nebraska sincerity that had set my heart aflutter. The first act was an instrumental group accompanying a short film and featuring a modern dancer who wrapped himself in plastic. It was delightful and surprising. We took a break and went down to the basement. A singer songwriter started the second set with a voice that fluttered like a sparrow between the concrete walls, and then it was me, last poetry set of the tour.

I could have read my diary out loud to these people. Their very presence made me feel like I was home. After the set, I planned to slip out quietly, but their kindness kept me. Gabriella Parsons, a photographer and journalist, asked if she could take my picture, so we went upstairs and got some shots next to a bathtub that had been turned into a chicken coop for baby chicks. The red light worked well, and I couldn’t stop giggling at all of it. Looking back at her, I found the thing that had made me come alive, the thing that I had fallen in love with in this unlikely town and even more unlikely tour destination. In Lincoln, Nebraska, they see you. No matter where you come from, no matter the anxious giveaway of your shaking voice or the way your earnest art seems to announce how uncool you might be: there, you matter. Simply because you’re a person. Simply because they value what you have to say.