If you spend enough time exploring Bellingham’s lettered streets you just might discover a man who lives in a shed. His name is Drew Miller, and when he’s not busy making banjos, Drew likes to write and draw comics. His most recent offering is Poor Thing,  an independent one-man anthology with great storytelling and a gritty feel that oozes originality. It features Witchin’ Hours, a dreamlike tale about the human interaction between two twisted and misshapen characters: Doctor Eli, and his down-trodden patient Gill, who suffers from a heart condition… of sorts.

The shading and detail are superb, as is the overall presentation, but what’s particularly striking is that this tripped-out and occasionally disturbing collection of stories is illustrated entirely in ballpoint pen—the pages, the panels, the lettering, virtually everything. The intentionally pixelated scenes showcasing Dr. Eli’s “holographic dating simulator” look so digital that you’ll swear they must have been Photoshopped, but they’re not. It’s a daring choice of artistic medium that succeeds admirably in distinguishing itself from others. The casual nature of Drew’s artistic versatility is what sets him apart from much of the competition; in billiards’ terms, while another illustrator was wasting time trying to find that perfectly straight 20 ounce cue stick, Drew just ran the table and sank the 8 ball with a 2X4.

Drew works fast and loose without character models, drawing exclusively from his own imagination. This skill to create creatures of bone, clothed in flesh, out of thin air, is an invaluable skill that is difficult to teach and that – more often than not – an artist either has or lacks. Behind the characters, the variety of backgrounds are well-considered and demonstrate a good eye for contrast. And unlike many of the more slap-dash independent comics out there the reader’s eye travels easily from panel to panel, and within larger panels, from object to object, with zero hitches.

Throughout Poor Thing, the characters’ numerous physical oddities prove consistently and profoundly bizarre. Their highly detailed pores seem to leap off the page and you can almost feel the chill of runny mucous dripping from Gill’s gummy eye-sockets. The level of visual abstraction is well balanced against the smooth, engaging storyline which dances between hilarity and thoughtfulness pretty easily. Outside of Witchin’ Hours, the other three stand-alone works in this anthology range in length from one to four pages and serve well to carry and supplement the tone of the work as a whole.

To date, 1,000 issues of Poor Thing have been produced on high-quality recycled stock using vibrant, vegetable-based ink. The pages sport a fine matte finish with full color front and back covers. Dimensions are slightly non-standard at 7.5” X 10” as opposed to the  standard comic size of 6.6” X 10.25.”

All in all, this comic does not look like anyone’s first effort at anything. And that’s a good thing. Whether or not it ever gets the critical or commercial attention it certainly deserves has yet to be seen, but you can rest assured that we’ve not heard or seen the last from this young and talented sequential artist.

Keenan Reed (KR): What are some of the challenges that come with using a ballpoint pen to draw comics?

Drew Miller (DM): You can’t cover large spaces at once, so the time it took me to make this comic was pretty ridiculous. It took way too long. I’m really glad with the way it turned out though. A simple pen is a pretty versatile tool; you can get a good range of marks, from subtle to bold.

KR: So why not use more computers?

DM: I’m not opposed to using computers but I started this one with pen, got halfway through the comic, and decided I wanted to stay continuous with the art style. In the future I’m interested in doing digital textures, hand-drawn backgrounds with digital stuff on top of that.

KR: That’s cool.  Your characters seem strange and outlandish, absurd and bizarre. Some might even say grotesque and disturbing. Why is that?

DM: Well, I grew up drawing dinosaurs and aliens for the first 10 years of my life and I can’t seem to get too far away from those artistic roots before they slowly come creeping back into my brain. Oh yeah, and I was introduced to horror movies much too early, which scarred me for life. My aunt showed me the movie Alien when I was just in kindergarten.

KR: Well at least it worked out. Someone should send her a fruit basket. How long have you been into comics?

DM: I bought my first comic in seventh grade. It was a Tomb Raider comic. I followed Tomb Raider pretty closely for years. At the time, I considered it fine literature, and would even argue with my mom over it. But over the years I’ve come to realize that I was really just into the boobs. I guess that means that if comics weren’t so nasty, I would never have gotten into them. Luckily, somewhere along the line I realized that those comics were actually pretty junky and crude. Thanks to artists like Paul Hood and Jamie Pope I began to figure out that I wasn’t much interested in the whole sex and violence thing that the primary comics distributors had to offer. I became intrigued by storyline and alternative art styles. Now some of my favorite comics artists include Zak Sally, John P., Dash Shaw, Santoro, Gary Panter, and others that have pursued a different path for comics, away from the action genre.

DM: I think I want to do a basic Xeroxed zine next. I wanted to do something totally different, something cheaper, that I can give away to people.

KR: That’s a noble goal Drew! But how will you manage to pay your bills if you’re running around giving things away for free?

DM: Paying your bills is pretty easy when you live in a shed. My rent is extremely low. I work part-time at the museum, installing exhibitions. Part of living in a shed means never taking off your long-johns.

KR: Which of your characters is best? We, your readers, demand to know.

KR: Yes. You must answer this question.

KR: The guy with the Pop Rocks milkshake?

DM: Ya. He’s kind of a gnarly character and he only shows up for a single crazy frame with a quick one-liner. I like giving the reader the chance to fill in the blanks sometimes. 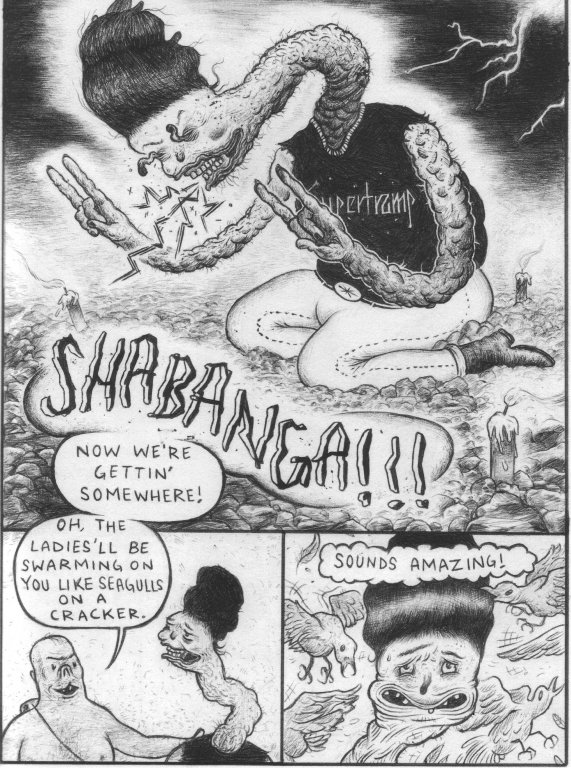