Once known simply as the Oyster House that was connected to Bayou on Bay, Rock and Rye Oyster House has not only changed its name and moved out on its own, but increased its ambition dramatically. The first thing you’ll notice is that the space is big and beautiful. The dark benches and floor contrast nicely with the walls and high ceiling. There are stairs leading up to a mezzanine above the bar, and a set of French doors that open up to outdoor patio seating in the back. 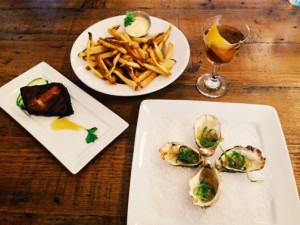 Pork belly, oysters, fries and a refreshing beverage. Way to be!
PHOTO BY RYAN RUSSELL

Before our arrival, we made online reservations at www.rockrye.com because why not? When is the last time you made dinner reservations in Bellingham? After getting a text message to confirm the reservation, in addition to a voicemail, we arrived at about 5:30 on a Wednesday evening. The place was bustling, with about half of the seats occupied, and we were greeted and taken to our table. Service was friendly and attentive. Apple judges his service by how empty his water glass is, and this place definitely passed the test by keeping it full at all times.

We made it just in time before the 3 to 6 p.m. happy hour ended, so we started with some appetizers and drinks. We split an order of four “Old Fashioned” off-the-grill oysters ($10), that came swimming in a sea of bourbon butter, orange zest, garlic and green onion, on a bed of rock salt. The oysters were delicious, and not too chewy. The orange and bourbon cut through the richness of the butter, and was well balanced and pleasant. We also had fries with turmeric and red pepper aioli ($3) and the house pork belly ($4 happy hour price). The house pork belly and its brown sugar glaze was charred perfectly, giving it a crisp outside and fatty, tender inside. This was easily the best serving of pork belly Apple had ever tasted in terms of flavor, texture, serving size and price. This is a happy hour special that shouldn’t be missed. In addition to the food, pints of beer were $1 off, so we enjoyed brews from Black Raven, Ninkasi and Great Divide Brewing.

Next up, the entrees arrived at the table and we gasped as soon as we saw the size of the halibut as part of the fish and chips ($16). The huge fillet of beer battered fish was nestled in a bed of house-cut fries, which hid a schmear of minty smashed peas. The breading on the fish had a hint of mustard and ginger, and was perfectly fried to a crispy golden brown. The fish itself was quite moist and did not get lost under the breading. The dish also came with a side of malt vinegar tartar sauce. The tartar sauce was creamy, but had a lot acidity (after his first taste, Kayser promptly ordered another). Kayser decided after the first bite that this was some of the best fish and chips he has ever had. While he can’t wait to try the rest of the menu, he will definitely be ordering this again. And again.

Apple ordered the slow-cooked brisket, which was a part of their weekly specials ($16). The dish included a pile of brisket and chanterelle mushrooms, lightly coated with a bourbon sauce, all above a generous serving of polenta. Brisket is one of the easiest things for a restaurant to screw up, by either serving it too overcooked and dry, or by soaking it in way too much sauce. This brisket was nicely balanced because the sauce wasn’t too overpowering and the meat was very tender. The mushroom added a nice touch by giving the dish a surprisingly soft and chewy texture with some bites. Overall, he felt that it is a shame that this isn’t on the menu permanently!

In addition to excellent food and beverages, Rock and Rye has been having a lot of cool events lately like a food and whiskey pairing, beer cocktails night, and a football-free ladies night every Sunday (which goes all day), including a $5 cheese plate, $2 off champagne and cocktails, $9 baked oysters and $3 chocolate torte. We both agreed that Rock and Rye is surprisingly awesome, and we are excited that so many positive changes happened between the move from Bay Street to State Street.

Rock and Rye is located at 1145 N. State Street, just south of the main Herald building entrance. They open at 3 each day (closed Mondays) until 11 p.m. Tuesday through Thursday, until midnight Friday and Saturday, and 10 p.m. on Sunday. For more information, visit www.rockrye.com or call (360) 746-6130.

Published in the October 2014 issue of What’s Up! Magazine