Jessica Lohafer is awesome. Simple as that. If you know her, then you know she’s inspired, passionate, funny, and immensely talented, especially when it comes to poetry. Jessica and her cohorts hope to give the local poetry scene a little kick and bring more life to readings and slams. She’s got a way with words and is this month’s 11 questions.

Tell us about yourself. Who are you and where did you come from?

My name is Jessica Lohafer, and I am a writer, bartender and feminist from Ferndale. I was born in Dubuque, IA and spent the first few years of my life in exotic Midwestern locations such as Bruce, South Dakota (population 200 people). My family moved out here right before I started preschool, so I’m basically a West Coast girl at heart. Unless you get me around the right family members. Then I’ve got a Minnesota accent like you would not believe. I moved to Bellingham when I was 19 and have never been able to leave.

As someone who has been active in the poetry scene over the years, what’s your take on its current state?

With any art scene, I think it’s important to not let nostalgia distract us from the new things that are happening. I started going to poetrynight when it was still at Stuart’s, and it was magic; I absolutely would not be doing anything I’m doing today without it. Then it moved to Fantasia, to the Anchor Café, the Darkroom, the Amadeus Project, the Black Drop, and on and on. And each time, it was magic, because each time the reading moved, we acquired new writers, new voices. I think that any time you get a group of people to willingly go to a literary event, it’s a success. Poetry isn’t exactly an easy sell. And there are always new events coming up! I’m really excited about some of these newer readings, the Kitchen Sessions, for example. There are some incredibly hard working writers and event coordinators in this town.

All of that said, I think that the literary scene needs to up its game when it comes to creating safe spaces. And I don’t just mean here; the last five years have brought some horrific abuses to light, unfortunately occurring at readings throughout the country. It’s easy to hide ugly things in literary communities, especially when they’re so small, and everyone knows each other. As an event coordinator myself, I have to hold myself to a high standard with each reading I curate; I have to ask myself, is this reading accessible, is it actively inclusive, do my attendees feel safe within this space? The Rain City Slam in Seattle has a particularly powerful mission statement, which said, “We refuse to permit any act of hate, violence or bigotry on or off our stage and microphone and will ban any person or persons involved in those acts.” This should be our standard. No more excuses. If we can continue to work on that, I know we can continue to foster really vibrant, exciting, significant literary readings. We’ve already done so much here.

It’s a Friday night and you are looking to head out. What’s your ultimate plan for the evening? 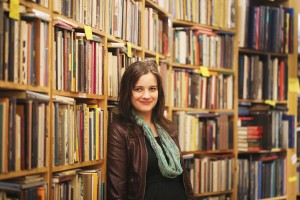 “If you want to write, you should,” Jessica Lohafer tells us. “Don’t let anyone tell you you can’t do it; don’t listen to that nagging worry that said you can’t do it. We need you. So don’t hold out on us.“ PHOTO BY SARAH DAY

Deconstructing the patriarchy! Other than that, I’m pretty mellow these days, especially since I bartend on Friday nights at the Redlight; there’s a lot more Netflix in my life than I would like to admit to. I still love to catch a good show at the Shakedown or in someone’s basement. But, if I’m really going out, let’s be honest, my best friend Jessica and I are probably going dancing at Glow. Or as my father refers to it, the Glow Stick Club.

Growing up in Whatcom County, where was your favorite place to go as a kid with your family?

Birch Bay. It still amazes me how close the water is in this part of the country. We would load up our van and head out to investigate the low tides, climb on everything, run around. It was so exciting! Granted, when you’re a county kid, your standards for excitement are pretty low. In high school, we used to hang out in the Haggen parking lot, listening to music. At least, I did. But I also wasn’t cool enough to get invited to any parties.

Where do you see yourself in 10 years?

Working on my fifth novel and helping my husband Richard Sherman ease into retirement. I’m kidding! I only plan on writing three novels.

What’s your favorite memory from the Bellingham poetry scene?

The night of Obama’s first election, there was a poetry show up at Western. A bunch of my favorite writers and friends were there, Derrick Brown, Anis Mojgani, Buddy Wakefield, I can’t remember everyone at that show. None of us could concentrate because the show was happening the same time that the results were coming in. At one point, two of the performers got up (I wish I could remember who!) and one said, “Ladies and Gentlemen, just so you know, McCain just took another state.” The crowd got pretty somber. But then the other guy, I think it was Anis, shouted, “And Barack Obama is the next President of the Unites States!” And it was pandemonium. After the show, we spent all night dancing and drinking, and there I was, 22 years old, hanging out with some of my heroes (shocked that they wanted to hang out with me at all), and everything felt possible.

What is the key to good poetry?

Listening. To yourself, other people, to the poem. Bad poetry is forced, you have to let the line come to you.

Who is your all-time favorite poet? Why?

My all-time favorite poet is Jack McCarthy. He passed away in 2013. Jack was my hero, my poetry dad, my friend. He didn’t start writing and performing Spoken Word poetry until much later in his life, but that didn’t stop him from becoming one of the most influential writers our scene has ever had. Aside from being a hell of a good poet, he taught me how to treat other writers. He made every single person at an open mic feel important, by listening to them, even if their poems weren’t that great. He made a point of talking to as many readers as he could after a show, often quoting specific lines of their poetry back to them. I love him. I miss him. Check out his work at standuppoet.net.

If you could live anywhere in the United States, except Washington, where would it be? Why?

Venice Beach. Because I secretly love body surfing more than most things.

What is your ultimate dream job?

Writing and teaching and touring. And working as the Chuckanut Writers Conference Planner! Shameless plug: this year’s conference is June 26-27, and it’s going to be phenomenal. I can’t believe the faculty we have confirmed, I am beyond excited. Get at me if you need more information! Or just check out: chuckanutwritersconference.com.

What are you reading right now?

This is Paradise by Kristiana Kahakauwila, Citizen by Claudia Rankine, and Colluvium by Dee Dee Chapman. All fantastic.

What question do you wish I had asked?

What are the best break-up poems? “Antilamentation” by Dorianne Laux. And “Falling and Flying” by Jack Gilbert. Luckily, I don’t need them right now, but they’re good to have in your back pocket. And I’ve really come a long way from my Dashboard Confessional days (sorry family!).

I’m starting a poetry slam! It’s called the Write Riot Slam and the inaugural show will be at the Honeymoon on Dec. 11. Sign-ups are at 8 p.m. and the show will start at 8:30. The feature is Roberto Ascalon! $2 to slam, and free to attend. But if you can’t spare the two bucks, we can figure it out. All ages!

Oh, and one more thing, if you want to write, you should. Don’t let anyone tell you you can’t do it; don’t listen to that nagging worry that said you can’t do it. We need you. So don’t hold out on us.

See Jessica Lohafer’s blog, The Picture of Success, at www.lohafer.wordpress.com.