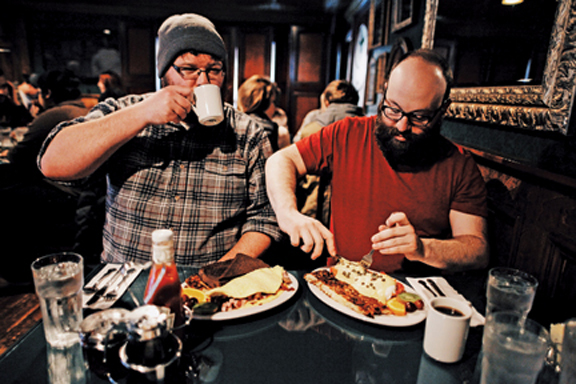 by Aaron Apple and Aaron Kaiser

Few restaurants in town are as ambitious as Skylark’s, and even fewer have the kind of unique atmosphere that Skylark’s offers. Open seven days a week from 8 a.m. until midnight, the restaurant offers everything from a breakfast menu to a late-night menu, as well as a kids menu.

Upon entering the Fairhaven establishment, you can’t miss the large wooden bar on the right, fully stocked with spirits including single malt scotch. The wall behind the bar is covered in different size mirrors, going all the way up to the high ceiling and around in the upstairs loft. The wall on the other side of the room had paintings hanging from a local artist, as well as a fireplace that adds to the ambiance. Seating is available in the front room, loft, and a downstairs dining area which is also accessible through the back alley.

We visited on a Sunday morning and were pleasantly surprised to find no wait time. We were seated in the upstairs loft, and promptly ordered cups of coffee ($2.30 each). Since Kayser was feeling extra hungry, he ordered the whole (3 eggs) Carnivore’s Delight omelet ($10.75). For those that aren’t feeling so famished, a half order (2 eggs for $8.50) is also available. This omelet, which can also be ordered as a scramble, came stuffed with hickory smoked bacon, diced honey cured ham, and chunks of mild sausage, as well as melted swiss and cheddar cheese. The omelet lived up to its name, and Kayser was thoroughly stuffed.

Along with the omelet, the meal included a giant rectangle of golden hash browns that took up the half of the plate. The hash browns were crispy on the outside and moist in the middle, just like they should be. Fresh fruit and choice of toast came on the side (Kayser opted for the dark rye). The delicious meal was extremely filling, so consider the half order if you aren’t famished.

Apple had the Nova Scotia Benny ($12.95) which includes a generous portion of wild-caught smoked salmon, two poached eggs and a toasted English muffin, all covered in hollandaise sauce and capers. The same sides came with this meal as well – hash browns and fruit. The hollandaise was rich and thick, and luckily there was enough to eat with the hash browns as well. The sauce complimented the flavor and texture of the salmon, and the capers added a salty kick to round out the dish.

Skylark’s has seafood, steak and pasta dishes, as well as burgers, sandwiches, a variety of Caesar salads and more. They have been voted People’s Choice Award seven years in a row for Best Chowder at the Chuckanut Chowder Cook-Off during Dirty Dan Days.
Service during our visit was extremely friendly, and even though we were seated upstairs, our server was attentive with water and coffee refills throughout the meal. It seemed like she was serving everyone else upstairs as well, so we were rather impressed since by the time we left, the entire loft was full.

Live jazz happens every Thursday, Friday and Saturday at 8 p.m., and other events take place throughout the year such as upcoming Valentine’s Day or St. Patrick’s Day specials.

Published in the February 2015 issue of What’s Up! Magazine