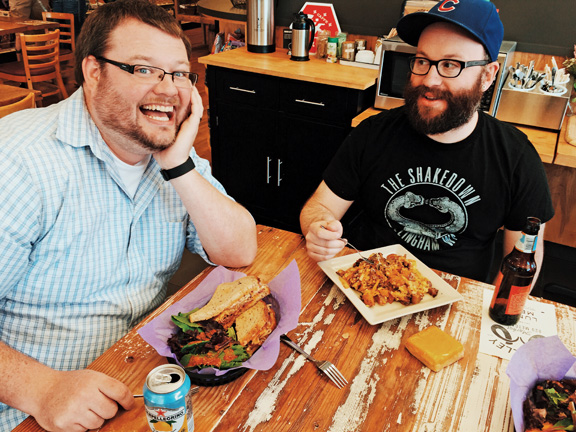 If you find yourself adventuring through the beautiful North Cascades, make sure to stop first in Sedro-Woolley. Besides getting a great breakfast or lunch at The Woolley Market, you can stock up on food supplies and other goodies. In fact, we loved the Woolley Market so much that a trip from Bellingham is worth it alone. Apple grew up here until moving to attend WWU in 2001, so the town holds a special place in his heart.

The Woolley Market opened last summer, and aims to offer local produce, meat, grocery and other products, while celebrating the history of the area and its connection with agriculture. The thoughtful design and inviting interior of the market harkens back to the grocery stores of yesteryear, while also providing a fantastic community gathering space. Special events like brewer’s nights and local music shows are commonplace in an otherwise fairly sleepy downtown.

On the weekends, Woolley Market offers a rotating brunch special. During our visit, they offered pulled pork hash or a root vegetable hash with citrus kale salad. Apple ordered the pulled pork hash ($10)consisting of eggs, pepper jack cheese, potatoes, yellow bell pepper, onions and plenty of slow-cooked Carlton Farms pulled pork. The eggs were perfectly fluffy and cheesy, with the onions and peppers giving it a little bit of a kick. All of that combined with the pork equaled a very satisfying and hearty breakfast. In addition, the serving size was extremely generous so he took his leftovers over to his Mom who lives just down the street.

Kayser decided to order lunch from the menu, and went with the Reuben ($10). This sandwich was filled with thin-sliced Carnegie pastrami, topped with sauerkraut and Swiss cheese, and slathered with a house-made Russian dressing, all on rye from Avenue Bread. This was a classic Reuben, and tasted great. The dressing and sauerkraut cut through the rich, tender pastrami, making for a wonderful combination of flavor. The sandwich was also served with a side salad of mixed greens, and lightly dressed with a house-made vinaigrette.

Apple saw the soup station next to the deli counter, and decided to try a bowl of the root vegetable goat cheese soup ($4). A split pea and ham soup was also available, but he decided to go for the seasonal option. The soup was pureed, and although the greenish-brown color was not particularly appetizing, it was very deliciously creamy and tangy thanks to the goat cheese.

The Woolley Market also has something for the craft beer lovers. Besides having a handful of brews available on tap, from breweries such as Fort George and Dogfish Head, the Market has a fantastic bottle selection, something completely new to Sedro-Woolley. In addition to the standard distributed beers, there may (or may not) be a couple of hidden gems amongst the selection, such as a row of Southern Tier’s 2014 Pumking.

Published in the May 2015 of What’s Up! Magazine