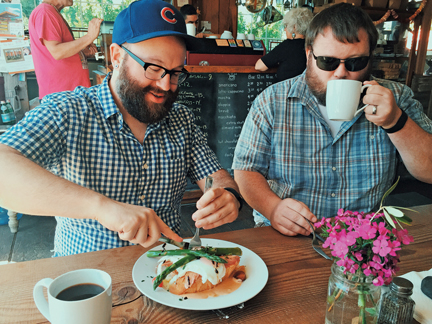 Located 23 miles south of Bellingham near the border of Whatcom and Skagit Counties, lies the beautiful little community of Edison. Known around here for its food and art culture, Edison had a population of only 133 for the 2010 census, and is where famous broadcast journalist Edward R. Murrow graduated high school. According to Wikipedia, in 1897 Edison became the headquarters of a national utopian socialist project known as Equality Colony, and things haven’t changed all that much since then. If you love good food and drink, and can appreciate a laid-back day, Edison can be your personal utopia.

Arriving on a beautiful Saturday morning with only a vague idea of where we wanted to go, street parking along Mactaggart Ave. was plentiful. The L-shaped town consists of just a handful of local businesses, all worth visiting and within a block of one another. We came with empty bellies, so we decided breakfast at Tweets should be our first stop. After settling down in the quaint open-air restaurant and ogling the pastries at the counter, we shared the Benedict ($15). This isn’t the eggs benedict you might be used to – piled on top of Breadfarm baguette was ham, over-easy eggs, asparagus, cherry tomatoes, comte cheese, choron sauce (a hollandaise sauce with a tomato puree), and a black garlic sauce. With the ingredients being sourced locally, this unique take on an eggs benedict tasted deliciously vibrant and extremely flavorful. 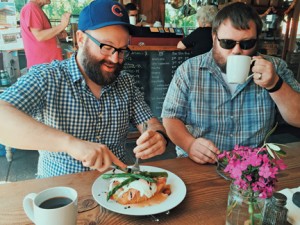 Enjoying eggs benedict at Tweets and quesadilla (below) at Mariposa. PHOTOS BY RYAN RUSSELL

Even though we split a meal, a walk was needed to let our food settle. After all, we had a full afternoon of eating ahead of us. Our next stop was The Lucky Dumpster. Located just down the road across from the Longhorn Saloon, The Lucky Dumpster showcases the workings of local artists. They specialize in unique household items and repurposed fixtures. After meandering awhile around the shop, we headed across the street to the Shop Curator. The displays in this shop looked more like the Museum of Natural History than the average boutique. Remnants of ancient artifacts and animal skeletons filled the space, along with bones, feathers, and plants. We thought it was one of the coolest shops we’d ever been in, with plenty to peak our interest. 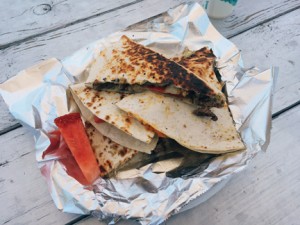 After satisfying our curiosity, we headed down Cains Street to The Old Edison. It was time for another bite to eat so we opted to split an order of the Ale Battered Fried Shrimp ($8). The basket was stuffed full with shrimp that was battered and fried to a crisp, and came with a sweet curry ginger sauce on the side. Apple even ordered another pint of brew, since they paired so well together. The beer list was fantastic, combining dive bar standards with more high-scale selections like Dogfish Head’s 90 Minute IPA and Elysian’s Space Dust IPA. The Old Edison also has a shuffleboard table complete with an electric scoreboard. In addition to the spacious dining are inside, patio seating is available out back for those especially sunny days.

After a couple of epic shuffleboard battles, we headed across the street to Mariposa. This taqueria specializes in delicious handmade tacos, as well as burritos, gorditas, tortas, and quesadillas. Apple ordered the Al Pastor Taco ($8), which consisted of red chili pork grilled with pineapple, topped with sour cream, queso fresco, and shaved onion. It was a single massive taco, which fell apart by end of the meal, but it was still so worth it. Kayser ordered the Carne Asada quesadilla ($13), with prime rib grilled with onion and bell peppers, as well as queso fresco, pico de gallo, and fresh plum. We also each ordered a glass of refreshing watermelon water ($5 each). The large quesadilla was perfection, and the added spice was a nice added surprise.

With limited indoor seating, we opted to sit outside between Mariposa and Tweets. Between the spicy quesadilla and the beautiful sunshine, the watermelon water was quite refreshing. By this time, we were stuffed. But, we definitely saved room for dessert and headed a down the street to Breadfarm. We each ordered a half dozen coconut macaroons ($1 each), which are also available at the Breadfarm booth at the downtown Bellingham Farmer’s Market.

Edison is a cool little place and worth checking out, especially while we are having such fantastic weather. Every place we visited made us wish we made the trip more often. Take note many of the shops and restaurant are not open daily, so we recommend heading down on a weekend to make the most out of your trip, but be aware it will be very busy.