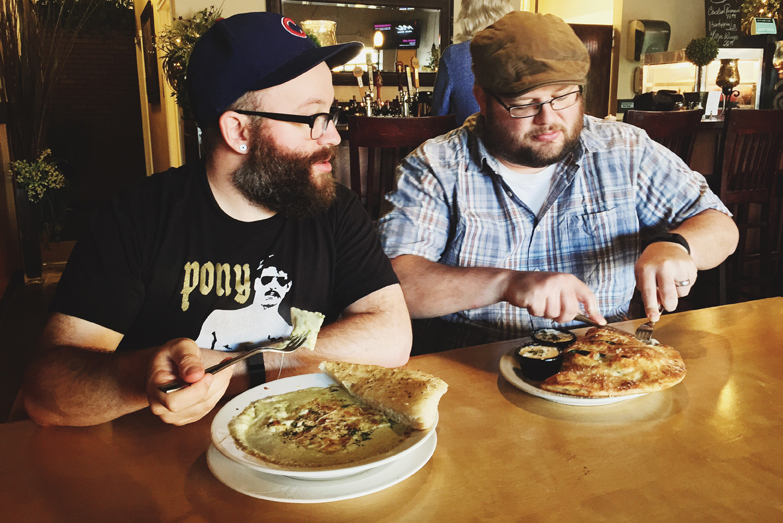 Tucked away in a quiet corner of Bakerview Square, Mozza is a small, new family-owned Italian restaurant. In the land of many chain restaurants, it’s refreshing to see a restaurant providing something unique to North Bellingham residents. Upon entering, we were greeted by our friendly waitress who took good care of us for the evening. Along with the 10 or so tables in the restaurant, there is also a bar along the back of the room facing the kitchen.

We split a half-order of the Zesty Buttered Lemon Pepper wings ($5.50 for 5 wings). The crispy wings came served with a buttery herb sauce. The wings had a lot of flavor on their own and didn’t really need the sauce, which left them feeling a little bit greasy after dipping. We’d definitely eat more of the wings and would try the spicy ones next time. Because we were there at happy hour (from 4 to 7 p.m.), Apple ordered a couple of pints of 21st Amendment Brewing’s Down to Earth Session IPA for only $2.85 each.

The meals were served with fresh “Mozza” bread for the table (spoiler alert: it’s foccacia bread), and a side salad each. Apple ordered the Spinach Ravioli with Creamy Pesto ($15.50). The ravioli looked a bit more like a soup than a pasta dish since there was an abundance of pesto sauce, which made it hard to taste the ravioli itself, unfortunately. The serving size was very generous, and it came with another large piece of bread which helped to absorb some of the sauce.

Since Apple went with a pasta dish, Kayser opted for something different and ordered the Creamy Chicken Artichoke calzone ($14). The calzone was enormous! It was filled with a cream sauce, along with tender chicken, artichoke hearts, fresh spinach, green bell peppers, onions, and of course, a lot of melted mozzarella. The crust was baked to a golden brown, and brushed with butter and garlic. It was delicious, and much bigger than expected. So much so that Kayser was not able to finish it, but not for lack of trying. However, it made for a nice lunch the following day.

The menu is especially large, focusing mostly on a variety of pasta dishes, pizzas and calzones. In addition to what we ordered, a few other dishes stood out on the menu – particularly the lobster ravioli ($25) and the spaghetti carbonara ($18). A lot of the entrees have a more inexpensive lunch price listed on the menu from 11 a.m. to 3 p.m.

Published in the August 2015 issue of What’s Up!