Hops ‘N Headz: Go for it 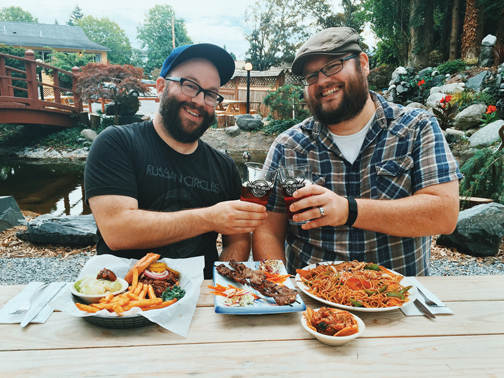 Occupying the former space of Japanese restaurant Osaka on Northwest Ave., Hops ‘N Headz is a taphouse and grill that opened in late 2014 and is operated by the same folks who ran Osaka. Although the beer garden out back still has Japanese artwork and a koi pond, don’t expect sushi here; they offer typical pub fare with a bit of an Eastern influence.

Hops ‘N Headz has an impressive rotating tap list of 30 beers. We tried a variety of brews during our visit including sour beers from local breweries North Fork and Wander, Elysian’s Space Dust IPA, and the fantastic 2×4 Double IPA from Melvin Brewing. Hues of dark blue and purple illuminate the taps behind the bar while the beer list is displayed above on a screen. The rest of the building offers unique amenities and different places to relax and enjoy a beer, including couches, a fireplace, several large TVs, darts and a foosball table.

Head outside and enjoy a seat in the delightful beer garden, by the pond, or among the various yard games available (you can bet we played a few raucous games of cornhole and ladder ball). The outdoor bar is housed in a large steel shipping container and offers a handful of additional taps not found inside. Food orders can be placed inside or outside. After eating,

Apple and Kayser split an order of the Galbi skewers (also known as kalbi), a Korean dish of marinated beef short ribs. The order came with two skewers and a cabbage salad. The charbroiled ribs were absolutely delicious. The rib meat was mouthwatering and full of flavor, but we both wished we received more than two skewers.

Apple ordered the pulled pork  (he was glad he asked the waitress for recommendations), which came served with fries and a delightful little blanched cabbage salad with peanut sauce. The sandwich was a generous helping of slow-cooked pulled pork smothered in barbecue sauce on a kaiser (not Kayser!) bun, red onion, kale and pickles. The juicy pork was perfect – the sauce wasn’t too overwhelming and the meat wasn’t dry. It was a fun and satisfying meal, especially with the cabbage salad and peanut sauce.

Kayser ordered the Yakisoba, a Japanese dish of stir-fried noodles and vegetables. It was a generous helping of noodles mixed with carrots, green bell peppers, mushrooms and onions, all garnished with sesame seeds. Chicken or tofu can also be added to the dish for an extra charge. While the cuts of vegetables were a bit large and awkward to eat with the noodles, they still tasted great and were cooked well all the way through. Kayser recommends the pairing of a sour beer to add a little tartness to the salty yakisoba.

In addition to the great brew selection, Hops ‘N Headz offers fantastic food and a very comfortable atmosphere. And with summer ending soon, be sure to take advantage of the outdoor seating because there is nothing like it in Bellingham.

Published in the September 2015 issue of What’s Up!