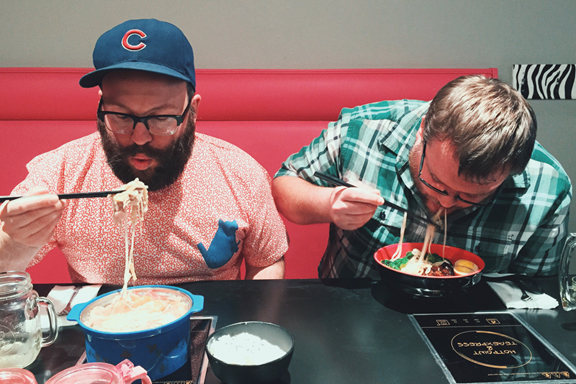 Hotpoint Tea & Express opened their doors earlier this year, and has provided the Bellingham community with a new way of dining: the customer has the opportunity to participate in the cooking process, in this case traditional hot pot. Hot pot is an East Asian dish, consisting of broth cooked in a pot in the center of a table. While the broth is simmering, fresh vegetables and thin slices of raw meat are added into the pot and cooked there at the table. Let the adventure begin!

The decor in Hotpoint Tea & Express is eclectic, to say the least. The booths are hot pink, as well as one wall, with the others painted gray. Mardi Gras masks are hung on one wall, and mismatched lengths of rope on another. There is also a large picture of the Eiffel Tower and an elephant, with uniquely shaped light fixtures illuminating the restaurant. Since this restaurant is known for hot pots, the tables include four individual hot plate burners. We were unable to figure out a theme, which we found somewhat captivating and confusing.

After placing our dinner orders, our server brought some hot tea and a tray of sauces, including a peanut sauce, chili oil, soy sauce, and a Chinese vinegar. Kayser also ordered the Best Green Tea ($2.75) from the Tea Menu. This giant stein full of iced green tea was lightly sweetened and refreshing. The Tea Menu, available upon request, also includes milk teas, blended ice teas, bubble teas, and teas with fruit.

Apple ordered the Pork Vermicelli ($10.99). This hearty hot pot came full of potatoes, napa cabbage, tofu, mushrooms, meatballs, broccoli, unpeeled shrimp and sliced pork, and came served in a seafood broth with a side of white rice. Even though it wasn’t listed on the menu, large pieces of imitation crab meat were also found in the pot. Apple had never had anything quite like it, but wished there was more of an explanation about how the dishes work when we ordered; the menu could at least provide some guidance. It would have been more enjoyable to order items separately and make a custom soup at the table using the raw foods, rather than a pre-made dish that seemed to include everything but the kitchen sink. Apple’s food was already cooked so the burner on the table was only used to keep it warm, which wasn’t needed.

Instead of the hot pot, Kayser opted for the Braised Pork with Noodle Soup ($8.75). The soup consisted of a savory broth and generous portion of rice noodles, topped with braised pork and mushrooms, steamed broccoli, and a hardboiled egg. The fatty braised pork, as well as the mushrooms, were coated in a sweet soy glaze which added a depth of flavor to the dish. The hardboiled egg added some richness to the soup, and appeared to have been boiled in a dark liquid, perhaps soy sauce, as the egg had a brownish hue. Kayser added a few spoonfuls of the chili oil for an extra kick.

To conclude the meal, our waiter brought us two pork steamed buns. We were surprised by (and grateful for) this, as steamed buns are not listed anywhere on the menu. The doughy sweet bread was filled with a delicious barbeque pork filling and is something we’d order in the future if we could. It beats a fortune cookie, that’s for sure!

If looking for a new and interactive dining experience, check out Hotpoint Tea & Express, but do some research into hot pot style dining before you go or be ready to ask questions.

Published in the October 2015 issue of What’s Up! Magazine