Cosmos: Out of this world 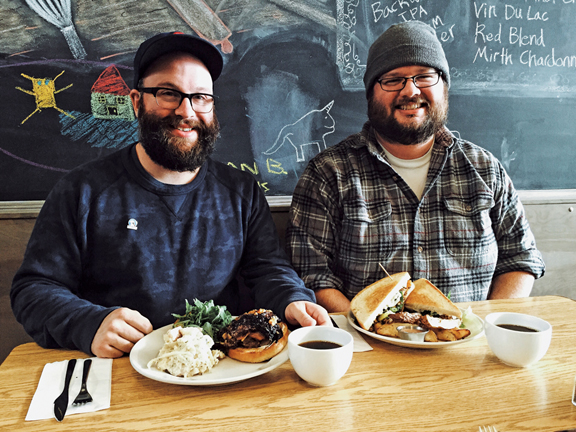 Serving comfort food like Mom used to make (or the Mom you wish you had), Cosmos Bistro opened last Spring in the Herald Building on State Street, adding another high-quality eatery to this part of town. We aren’t complaining though, just surprised by how many awesome restaurants are located within a few blocks on one street: Cafe Rumba, Rock and Rye, Old World Deli and Copper Hog, just to name a few.

There is a lot of seating available in this deceivingly small space, but we could imagine the place filling up for dinner and brunch on weekends. In addition to the modern-rustic dining area and seating at the bar, there are also tables located upstairs that overlook the restaurant. The atmosphere (pun intended) at Cosmos is very comfortable and cozy. While not particularly space-themed as one may expect from their branding, the restaurant is filled with little charms you will notice like mason jar-encased lighting, wooden crates adorning the walls and a large chalkboard hanging up behind the booth seating.

Apple ordered the 3B Burger ($12), presumably named after the famed bar and music venue that closed in Bellingham nearly 10 years ago, but also because of its toppings – bacon, blue cheese and blueberry onion compote. The burger didn’t skimp on size or toppings – several thick slices of bacon laid atop a pile of blueberry and blue cheese, creating a savory and sweet goodness that made it one of the best burgers in Bellingham that Apple had ever tasted. He ordered a side of German-style potato salad ($2 extra) that was on the specials menu. Having just returned from Europe, including a few nights in Munich, the salad hit the spot and had him saying “Prost!” with each bite.

After much contemplation and soul searching, Kayser ordered the Grilled Meatloaf Sandwich ($12). The hefty sandwich arrived hot on toasted sourdough bread with seared meatloaf and melted cheddar cheese. Onion slaw, mixed greens, and a smear of horseradish aioli rounded out the rest of the sandwich, providing a more complex flavor than you’d expect from a meatloaf sandwich. The meatloaf was rich and tasty, pairing perfectly with the onion slaw. Seasoned roasted potatoes came on the side with a creamy dipping sauce.

Two days after our initial visit to Cosmos, we decided to return for another lunch and try more items on the menu. We decided on the Croque Monsieur and the special of the day – sloppy joes. Both were incredibly flavorful and filling, especially the massive Croque Monsieur, a French sandwich with thin slices of ham, caramelized onions and gruyere cheese sauce on sourdough bread. Luckily the Croque is a standard on the menu, so you can enjoy it any time. We paired our meals with two glasses of house red wine, as well as delicious brownies and caramel apple crumble a la mode.

We left Cosmos Bistro both times with big smiles on our faces, excited to return again as soon as possible to try the rest of the menu. Items like the Spicy Filipino, Kulshan Beer-ger, Pork Adobo sandwich and Tournedo of Beef are all begging to be eaten. Service was prompt and friendly, and the food was “out of this world” (again with the puns). At each table you will find a list of local food providers that they utilize, using as much local and sustainably grown food as possible.

Published in the November 2015 issue of What’s Up! Magazine