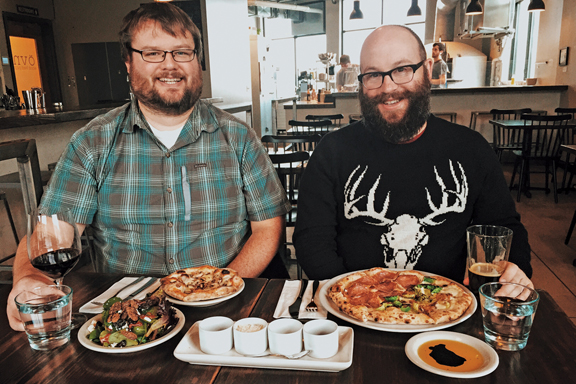 Upon hearing that another pizza place had opened in Fairhaven, and even though we both love pizza, it was hard to get very excited since we already have a large number of great pizza places in the area. Surprisingly, Övn did not disappoint and brings an authentic style of true Italian pizza to our city.

Övn opened in August on the corner of 10th and Mill Street in Fairhaven. Specializing in Neapolitan-style pizzas, the restaurant uses a giant wood fire oven that was hand-built in Naples, Italy. The restaurant’s oven can heat up to over 800 degrees Fahrenheit and can cook a pizza in two minutes. This intense heat creates a blistered crust with just a bit of crunch. The dough is also naturally leavened, which creates an airy, yet chewy texture.

The space is furnished in a minimalist fashion, with dark wood tables and the wood-fire oven taking center stage in the open kitchen. The dining area is small, but quite comfortable, with additional seating at the bar. Black-and-white films were projected behind the full-service bar during our meal. After taking our seats, Apple ordered a pint of craft brew from Pfriem Brewing and Kayser a glass of house red wine.

Kayser decided on the lunch pizza special ($7.95 + $1.95 to add a lunch salad). The lunch pizza is a 6-inch version of any menu pizza, and Kayser ordered the Forage with the spinach salad. The spinach salad came out first and consisted of spinach with mixed greens, tart dried cherries, chevre, candied pecans, and a raspberry vinaigrette. The salad was fresh, tangy, and sweet, pairing very well with the pizza. The Forage pizza was absolutely fantastic, consisting of an amazing crust layered with caramelized onions, asiago and fresh mozzarella, crimini mushrooms, and fresh thyme. For a sensory overload, he added a light sprinkle of the truffle salt. It was quite rich and savory, with plenty of earthiness from the truffle salt, mushrooms and thyme.

Apple knew he wanted a regular 9-inch pizza ($13.95) since he was hungry, but he let the waitress know he was having trouble deciding what to get. He was thrilled to find out that any pizza could be split in two, so he ordered the Brassica (smoked and fresh mozzarella, garlic, black pepper brussels sprouts, bacon and lemon zest) and the Artis (rosemary, chilli flakes, gorgonzola, fresh mozzarella, salami, parmigiano and honey). Both sides of the pizza were extremely tasty, covered in fresh toppings and cheese over the most delicious, crispy crust. The best food in the world is often the most simple, and Övn seems to share that philosophy. They also offered us free crust dips and pizza accoutrements, so our waitress brought an olive oil and balsamic vinegar dip which added to the meal, as well as truffle salt, fresh parmesan, red pepper flakes and habanero salt.

The pizza is simple and straightforward, combining fresh ingredients with old world recipes and cooking practices. Övn brings an authentic style of pizza to our city, and should be experienced by all who love a slice now and then. Michelangelo would be proud. Cowabunga, Övn!

Published in the December 2015 issue of What’s Up! Magazine