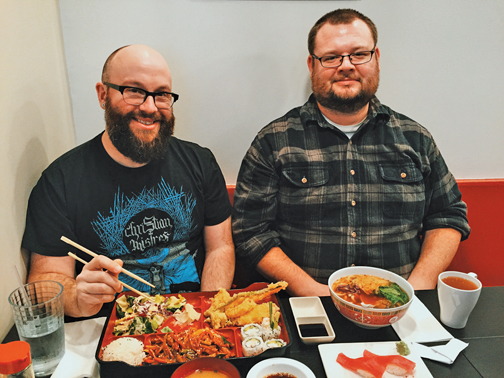 Published in the January 2016 issue of What’s Up! Magazine

The center of downtown Bellingham has lacked variety in the sushi department, making Jun’s Sushi and Bento a welcome addition to the Railroad/Holly area. Located in what was previously the Red Berry location just south of Bob’s Burgers, the tucked away eatery offers intimate indoor seating with an outdoor patio during the warmer months. We had a group of 5 and along with another group of about 10, we took up nearly every table in the room. There is also some bar seating in front of the sushi chef for those who like to be close to the action, as well as some stools along the wall facing the sidewalk. The decor is simple, clean and cute, though the TV hanging near the door proved to be a bit distracting while conversing with friends.

After much deliberation with a growling stomach, Apple decided on a bento box. With a variety of six different boxes (it is in the restaurant’s name afterall), including chicken katsu, don katsu, salmon steak, nigiri sushi and beef with garlic, Apple chose the chicken with Korean garlic sauce. Each bento box comes with rice, salad, four pieces of California roll, veggie tempura and miso soup. Beside the wonderful sauce that the chicken was cooked in, the veggie tempura was a definite highlight. Many sushi restaurants will give you just a couple pieces, and with many of the veggies being the same. This meal came with mushroom, broccoli, onion, potato, yam and a green bean – all fried to perfection. The bento box was absolutely huge, but somehow he managed to finish all of it even after the waitress warned about the size.

Kayser ordered by the Chicken Udon ($7.75) and the Tuna Nigiri ($4.95), along with a cup of green tea ($1.50). The soup was served piping hot in a large bowl, perfect for the cold, autumn day. The large udon noodles were submerged in a salty, rich broth and topped with spinach leaves, red cabbage, green onion, mushrooms, and grilled chicken. The soup was filling and full of flavor, and comes at a great price. Kayser left a little bit of room for the tuna nigiri – which was masterfully made using fresh, raw tuna that was tender and silky smooth. The tuna, rice, wasabi, and a quick dip of soy sauce made for a delicious, classic combination.

We are always happy for more sushi options downtown, especially when the chef treats the food like art. Jun’s Sushi and Bento is located at 202 East Holly Street Suite 110. They are open Monday through Saturday, from 11 a.m. to 9 p.m. and closed Sunday. They can be reached at (360) 306-3584.