The Filling Station: Gas up 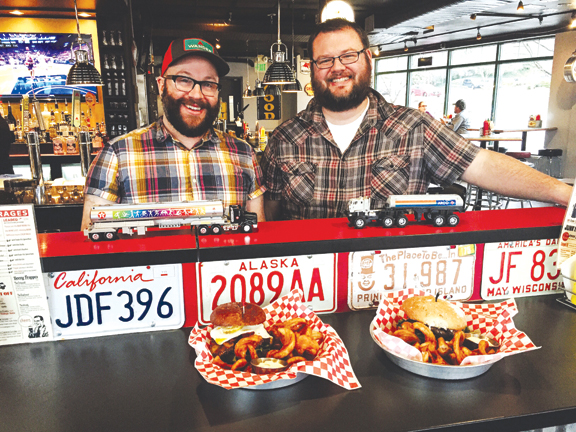 Those who long for the days of classic cars and vintage full-service gas stations should get excited – diners at The Filling Station sit among a large collection of tastefully-displayed memorabilia and antiques, including classic signage, oil can napkin holders, license plates, an old gas pump and more. The Filling Station offers a variety of burgers, salads, appetizers, and milkshakes, along with a full bar with cocktails, beer and wine. A separate breakfast menu is available on weekends.

The menu does a great job of extending the gas station theme to the food they offer. Some of the more cleverly-named items that stuck out include the LAMBurghini burger, CARBuretor (cheese-filled bread bowl), dip sticks (fried zucchini) and more. If you are on a low-carb diet but still crave a burger, you can get a ConvertiBOWL which omits the bun. Speaking of buns, the restaurant is owned by the same folks who run Avenue Bread, so the bun options are plentiful and delicious, including rosemary ciabatta, salt and pepper potato, sesame seed, sauerkraut rye, and gluten-free.

As a fan of puns and the taste of baby sheep, Kayser ordered the LAMBorghini ($12.75). This lamb and beef-blended burger comes topped with tzatziki sauce, Kalamata olive and tomato relish, fresh arugula and feta cheese, and served on a rosemary ciabatta bun. The combination of the creamy tzatziki, relish, and feta added the perfect tangy contrast to the rich, juicy lamb burger. The Tire Treads (think large, corkscrew curly fries) that came on the side were also an unexpected delight, fried to a golden crisp and lightly seasoned. The corkscrew feature proved to be the ideal vessel for the dipping sauce. Kayser opted for the tartar sauce and poblano aioli, both of which were delicious. No evidence of his meal remained, other than an empty basket and satisfied smile.

Arriving just after the breakfast menu ended at 11:30 a.m., Apple still craved bacon and eggs. Luckily with any sandwich you can add eggs, bacon or avocado for $1 each. He decided on a fried chicken sandwich called the Click ($11) which comes with arugula and caramelized onion on a salt and pepper potato bun. He then added bacon and a fried egg, creating exactly the breakfast sandwich he was craving. The fried chicken breast hit the spot perfectly, being breaded and fried just right, and the cracked egg yolk became another sauce for the burger. The sandwich was big and delicious, so much so that Apple gave up some of his Tire Treads to the rest of the table because he was stuffed.

We were pleasantly surprised that The Filling Station doesn’t rely on its theme to get people through the door – the food was good in and of itself. February is the grand opening month with a different special each day of the week, so it’s the perfect excuse to fill your tank. You might just see us there.

Published in the February 2016 issue of What’s Up! Magazine