Huey P: The next wave of PNW hip-hop 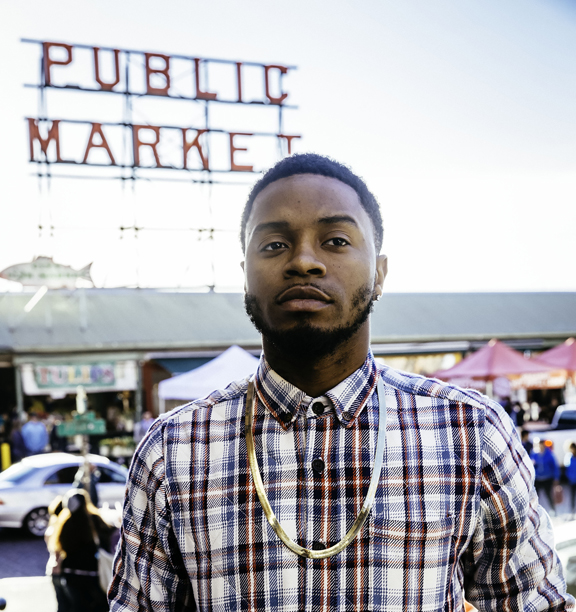 Out of the Seattle/Tacoma area comes Huey P, a new hip hop artist making waves with his sound, positive message, and desire to bring the local hip hop community together.

Huey, now in his mid 20s, began free styling 12 or so years ago. “I started in middle school – learning the art of rap,” he said. “Dabbling… freestyle sessions. Eventually, one of my brothers pulled me aside and said ‘You’ve really got it.’” As he moved into high school, he formed a group for a few years – always working, always developing his craft and understanding.

Following that  music, Huey continued to work but it was always home recordings, nothing that had the quality behind the message. While he had the obvious skills, other people in the community told him he couldn’t make it the Seattle/Tacoma area, he needed to get out. “Everybody encouraged me to leave,” Huey stated. “They said your talent is not going to be seen here. You need to go to LA, Atlanta, New York.”

But Huey’s roots in the PNW are strong and he wanted to have his career here, because of his roots and to be part of something in the local hip hop community.

“Having someone from the more urban culture in a positive manner, in the right light. It hasn’t been done yet,” he said, adding, “I feel like we have that.” He wants to help raise the positive energy of local hip hop as well as the community – to create something here that branches out past the music.

It wasn’t until connecting with his engineering partner, Chris Pack, that music clicked. Chris was working at Robert Lange Studios (one of the meccas of the Seattle music scene) and Huey was able to lay down some track, some of which would become his debut EP, Did You Get the Message, released in December.

Since Message came out things have exploded for Huey with show and tour offers coming out of the woodwork. “It’s been great feedback,” he said. “It’s been doing what it’s supposed to do and we’ve been getting a lot of recognition.” He added, “We’re pretty much booked up throughout the rest of the spring.”

In addition to live offers coming in, the record has been getting radio play out of state as well as written up on numerous blogs. They were also admitted to World Star Hip Hop, a huge accolade for them. “It’s generating a fan base – people in and out of state that are getting are getting wind of the music.”

While Huey’s message can be seen as bravado, it’s far from it – he’s genuinely excited about what is going on, not just for himself, but for the community. “The right people like myself and other people… the right ones are clicking. The right people from north to south are now connecting to generate the culture.”

In the past, “Nobody was supporting each other – there was no community,” he said, but that’s changing and for Huey THAT is what matters. Bringing positive change to his community. “We like to base our moment on showing love.”

The musical love that comes through can be sourced back to his roots. Huey wasn’t raised on hip hop, but grew up in the church and listened to Al Green and even Tony Toni Tone as a kid. “There was so much passion and real emotion in that music… way more real – the sound, the feel and how it made you feel. And what they were saying.” He added, that type of music would influence “you to treat your woman a certain way. “It’s a lot about love.”

Being a parent also has a large influence on Huey as he keeps them in mind while he creates. His central thoughts are “What are we really giving to the world? What are we influencing?”

It’s that holistic vision in his message, sound and movement that is so engaging about Huey P – someone who will be on the minds of a lot of hip hop fans over the next year and beyond.

LIVE SHOW: See Huey P open for Devin the Dude on April 15 at the Wild Buffalo. For more information, see his website at hueypmusic.com.