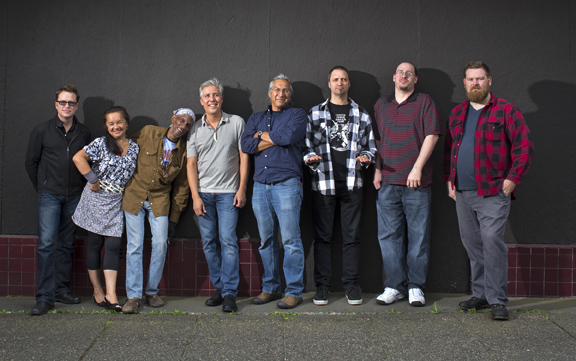 Mixing funk and Native American, Khu.éex’ has brought together a unique group of musicians, including Bellingham’s Captain Raab and the late, great Bernie Worrell. Nearly three years in the making, the group will finally release their debut album, The Wilderness Within, at the Nectar Lounge in Seattle on July 9.

The project began a few years ago when Preston Singletary, based in Seattle, donated to a Bernie Worrell Orchestra kickstarter. Bernie found out Preston had a Native American project called Little Big Band and asked them to open for the Orchestra the next time they were in the area. “When he came through, they got to hang some more,” Captain Raab said. “Bernie thought it’d be cool to fuse his music and native American music.”

Preston went about assembling a band, bringing in a mixture of traditional Native American artists as well as some of the best musical minds in the world. When they arrived to their second stage, he asked Raab to join up. “That’s how I got pulled in,” he said.

A Native American, Raab had lived in Bellingham from the mid 90s till 2002, when he moved to Albuquerque. While there, he joined Red Earth, a Native American rock band that toured extensively, gathering a large following. In 2007, he moved back to Bellingham, working and creating music.

Preston was a fan of Red Earth. “The native musician circle is pretty small,” he said with a laugh, so after the initial recording sessions, he brought Raab in to overdub guitar. “The first session, I wasn’t in the group yet, they went straight into the studio. No preproduction on it – improvisation is a big part of what we do,” Raab said, adding, “The first round they just went in and played.”

That was over two years ago and the album, recorded by Randall Dunn (Sunn O))), Wolves in the Throne Room, Six Organs of Admittance), will finally be released this month. Since then, Khu.eex have recorded two more full albums (as part of a trilogy), the final with Steve Nistor (Danger Mouse) on drums. The final overdubs were just being wrapped up two months ago on the second album and the material, including the last sessions with Bernie Worrell (organ, synth, electric piano, and clav) were finalized as well.

Part of the delay in releasing music, according to Raab, is there is so much recorded material – approximately 11 hours worth. “Hit record, play,” he stated, adding, “some of the pieces we came in with a rough idea and some of it is made up on the spot.”

While this sounds like a project you’d expect with the likes of Skerik and Stanton Moore, their sound is wildly diverse. “Some of it is songs, some of it’s tonal drone improv stuff,” Raab stated. “It ranges from P-funk ish stuff, to sounding like Earth’s stuff to early Funkadelic to Talking Heads territory. It’s a pretty broad range.”

Raab added, “That’s why Randall is so good, he can take stylistically things and make it sound cohesive.”

Vocally, there is a wide range of styles ranging from no vocals to spoken word to singing. Khu.éex’ primarily speak and sing in the Tlingit tribal language; The Tlingit language is spoken by the Tlingit people of Southeast Alaska and Western Canada. Preston, Nahaan, Clarrisa and Tagaban are native Tlingit; Raab is Siksika. This unique vocal approach flows throughout the music as well, helping to seamlessly weave the native and English sounds.

While the project would be unique on its own, Raab points out the importance of Bernie’s musical contributions. “Bernie’s ear is so incredible, he can hear the song once and then is already playing it. His mind is doing things human minds aren’t supposed to be doing.”

As the sessions continued and Bernie’s illness worsened, his playing became more cosmic. At the time of the interview, which was conducted in April, he noted it was the most inspired he’d ever seen Bernie play and that he was at 1976 level of playing (P-funk’s creative peak). “Watching him play you’d never guess he was fighting anything,” he said.

As the first album release approaches, Raab is incredibly happy with how their work. “It’s a really unique project. Native and non-native music tends to be watered down. But this has been fused in ways I haven’t heard before and having it maintain the integrity on both sounds,” he added. “It hasn’t come out corny, it’s come out really good.”