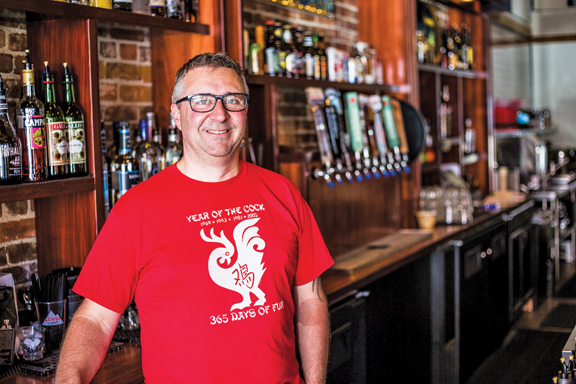 Few places in Bellingham fill me with nostalgia like the Cabin Tavern. So, when I found out that one of the former bartenders at the 3B, Christian Danielson, purchased it and remodeled, I had to check it out. Right off of the bat, just driving by to find a spot to park, my jaw dropped. Mood lighting, antler chandeliers, and a raised ceiling all visible from the roadside make the bar front a head turner.

When I stepped inside, I was immediately overcome with a sense of warmth. The former Cabin of which the denotation dive bar was used graciously couldn’t possibly haunt the remodeled room. From the second I stepped in, all bias and nostalgia I had from the old bar seemed to melt in a really positive way, which is saying something. It’s been hard for me over the years watching other similar spots undergo a similar transition, The Comet Tavern in Seattle being the most glaring. To see a spot that had so much character and for a lack of a better word, charm, transition into something so new and vibrant is usually a little bit of a jolt. It’s still quiet, and still a great spot to meet with friends while remaining undisturbed by other patrons. Service is quick and on point, thanks to Bellingham bartending veterans filling the space behind the new bar, which, along with the rest of the décor, aligns itself with a much more Cabin motif. One of my favorite new things about it, and it’s weird for me to say this, is the food. Queso and chips that can satiate any munchie one might have, and a really, really good heavy chili (Jeremy Peterson’s award winning recipe). Camping food, prepared for you as quickly as it takes to order a drink. Having another quick, easy to get to spot that has yet another variety of late night bar food is only a good thing. My stomach wasn’t quite empty enough to fit in a Cabin chili dog, but based on the chili I had and the quality of everything else in there, I wouldn’t be surprised if it’s also a killer menu option.

According to Christian, he bought The Cabin because he’d missed working in bars. “It’s fun. I think a bar is a place where everyone gets to be 100 percent authentic. A good bar should be a fun place to be with a welcoming party atmosphere where people don’t have to censor themselves; a place to let down and relax from the stresses of their jobs or hectic lives.” Initially, Christian looked into creating a neighborhood bar in the fountain district, but when he saw a listing for The Cabin, he realized it would be a better fit. “It just seemed like perfect timing and location. I pretty much just got lucky.”

The menu for The Cabin was meant to be easy but tasty, with dogs, chili and queso. According to Christian, they’re hoping to start having brats and other sausages soon as well as the potential of a veggie option.

“I’m really happy with the way the bar turned out. It’s very rewarding to have a vision and be able to make it actually happen the way I imagined. I didn’t intend for the renovation to be as extensive as it turned out to be, but the deeper I dug the harder it was to stop. It will be fun to see it continue to morph and grow over time.”

It’s extremely awesome to see a historic establishment with so much character rekindle itself, especially in such a welcoming way. Do yourself a favor and grab a beer at the Cabin in the near future. You’re gonna be surprised.