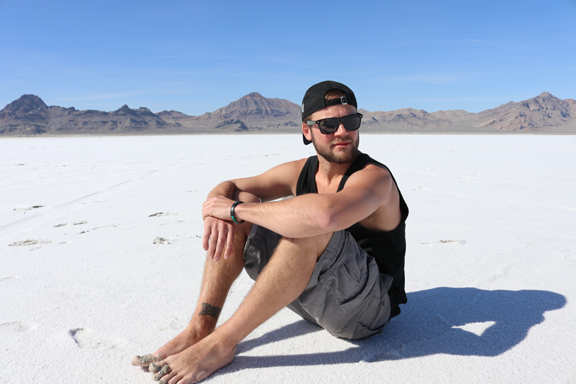 From drunken roller-skating in Vegas, hostel pub crawling through San Fran, to standing on the edge of massive canyons and venturing deep within dark caverns, to finding yourself standing in front of Walter White’s house, it’s hard to believe we even had time to play shows! But oh shows we did play. Embarking on a journey that began on Valentine’s Day in Portland and ending on St. Patrick’s Day weekend in Elko, NV, Deadly D’s “Til the Fight’s Finished Tour” was a journey to say the least.

We set out on an ambitious quest to conquer seven states in five weeks, our first tour. Some called us crazy, others, brave. But regardless of what they labeled us, this adventure surely tested our mettle and measured our grit. Maybe it would have been wise to test the waters a bit, possibly wade out a few feet in the kiddy pool to feel things out. But no, in the spirit of the mighty Tenacious D we proudly yelled, “Nay! We are but men!!” leaping into the deep end, leaving our childish floaties behind. Sink or swim, we were going all in on this one.

We had little idea of what to expect. Equipped with nothing but some ill hip hop and a spiffy Dodge Caravan we set out to see what the world had in store for us. Back home we rock shows as a full band. On this trip, being our maiden voyage, we set out as a small recognizance team. For the most part, this unit consisted of myself, the emcee of the crew and Gary Bird, the team’s DJ. We had reinforcements arrive in the shape of our drummer Tommy during a brief stint in Northern Oregon and our singer Lydia during a crucial stretch between Northern California to our rendezvous point in Vegas. Being our first time in many of these locations, we wanted to scope the lay of the land in order to see which ones to return to and obliterate with our full platoon. I must say; we discovered this to be a wise decision. Any more added to the group I am not sure if we would have been able to provide enough rations and shelter to survive. We quickly realized that our initial plan to bring a trailer would have been a disastrous mistake. Word to the wise, anyone going on tour, you will have very little to no luck finding a place to park a trailer, let alone maneuver through busy city streets. Our van was a mobile and valiant steed and she faired us well.

Venturing to new lands and finding ourselves in unfamiliar territories, we figured the crowds would be small. For the most part, they were. But we’ve always been about maximizing our situation, no matter what that may be. Developing a name for our selves and building a solid network was our number one objective. We more than succeeded in this regard. We were out here to soak it all up, take in whatever this journey had to offer.

The love we received on the road was phenomenal. The way in which people would open up their homes, invite us into their circle and accept us as their own was a magical feeling. Meeting so many likeminded folks with similar dreams and aspirations brought us together in a special way. It was easy to connect and exciting to learn the story of someone new. Complete strangers became close friends. Unfamiliar scenes developed into our new home. Everywhere we went we experienced new sights, sounds and scenery.

Every day is a new adventure when you are on tour. I’ve never experienced anything like it. It is a surreal feeling that music could take us so far from home. It was something we have always wanted, something we have worked extremely hard for and strived to achieve for a long time but to actually get out there and experience it was out of this world. It felt like we had learned a secret that had been long overlooked. It was as if we rediscovered and awoken some ancient nomadic spirit within ourselves.

Not to say that all went as swimmingly. We experienced roadblocks and potholes along the way. Certain potholes that more resembled driving over a sewer missing the manhole lid. The kind that whip your head harder than Willow Smith and break yo’ neck worse than Busta Rhymes. Bad things will happen. You are vulnerable, you are exposed and people will try and take advantage of that. This is part of the life we choose. All you can do is everything in to your ability to cover your ass. Trust your instincts. In the words passed down by the wise prophets of the Wu-Tang Clan, Protect Ya Neck. But alas, the shit will still find a way to seep within the cracks of even the most iron clad of body armor. No matter how careful you are, we have all mowed over that rogue dog turd that never got picked up in the yard. It will hit the fan. It will rain down upon you. How will you deal with these sticky situations? Will you tuck tail and run? Or will you wipe of the spackle, stand up and fight back? Seeing that it was called the “Til the Fight’s Finished Tour,” I think you can guess the only decision we were left with.

So we marched on. We persevered. We survived. Anyone in the world of music will tell you. Determination and resilience is key. This is no easy road we decided to walk on. The path is a rough one at times but the views along the way can be down right badass. I know the stretch we just ventured down was beyond epic. It inspired me to get out there and see more. It’s opened my eyes to a whole new world of possibilities. The next trip started planning itself long ago. The travel bug has burrowed itself deep within my brain. It has the reins now. If you have the urge to do the same I highly advise you do so. Indeed the world can be big and scary. But so can lots of things. Like bears. And asteroids. So get out there and do it before a bear riding an asteroid comes crashing down and destroys us all.