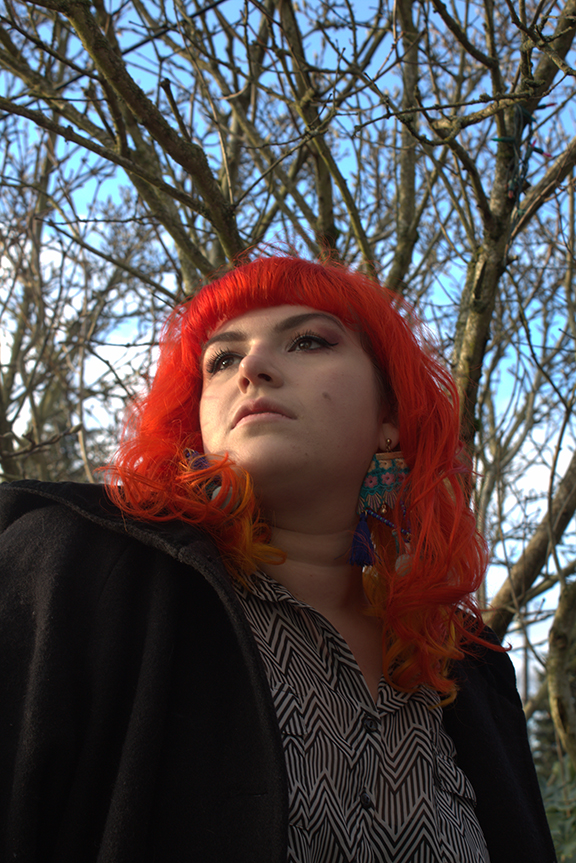 For Autumn Marceau, her medicine has taken the form of creating music. In order to combat both insomnia and ADHD, Marceau harnesses her creative mind and musical talent to craft ridiculously catchy, soul-touching tracks.

Sitting across from her, Marceau’s bright red/orange hair contrasts with the deep teal walls of The Black Drop coffeehouse downtown. The sun is steaming in the windows, it’s one of the first sunny days of spring, and the shop is bustling with customers.

“Having ADHD is a blessing and a curse,” Marceau said, raising her voice above the surrounding conversations. “Our brains are aching for stimuli all the time, so when we find something that we are really interested in, it’s almost like a drug where you simply can’t stop learning.”

Using the introduction to the Ableton Live program she received as a birthday present, Marceau taught herself to create bittersweet, achingly beautiful electronic music under the artist name Glitchlette.

Stretching her creative muscles, she recently released the demo to her second single on March 19. The track, titled “SHROUD,” highlights her ethereal vocals and shows off her knack for assembling clean, effective song structures. The sound, she classifies as synthpop, places herself a fair distance away from where her musical career began.

Born in her grandparents’ house in Ferndale, Marceau has lived in the Bellingham area her entire life. In high school, she became well-versed in classical music through playing the cello.

Nearly two and a half years ago, Marcaeu made the decision to trade in the cello for a bass and played with a band called Harpy. She said the transition was both refreshing and relatively seamless. While playing with the band, she began to look at music through a new lens – taking on the perspective as a writer rather than just a listener.

“I realized I could write music from my heart and soul – wow, that’s so cheesy,” Marceau laughed. “I started playing music that was mine, rather than stuff like Tchaikovsky. I mean that’s fun and all, I love Pyotr, but writing my own music was really eye-opening.”

Together, Heartbeat played music for around a year until they disbanded and everyone went their separate ways.

“We wanted different things, it was a very mutual, amicable breakup. But I had all of these songs of Heartbeat that now I didn’t know what to do with,” Marceau said in between sips of iced coffee.

Originally set on creating music that edges on ominous and scary, she instead found herself naturally gravitating instead toward lighter, pop music. Marceau said she tended to overthink the technical elements when creating darker music. So she pursued the music she found fun to make and began experimenting with different syths and elements of 80s pop music.

Mirroring her personable character, Marceau adds elements of humanity and reality in throughout the electronic beats. For example, in her first single, gymnos, there is a sample of a washing machine added in.

“I’m constantly exploring new styles, bouncing around all the time,” Marceau said. “I’ll mess around with an R&B drum sound and the next day I’ll want to create a super dance-y, pop-y song.”

While she is continually influenced by different genres and said she hasn’t completely developed her own sound just yet, Marceau is presently trying her hand at incorporating elements of pop music. The upbeat, sing-song structures juxtapose her emotionally raw lyrics and somber vocals. The end result is a grounded sound that is, uniquely Glitchlette.

“There is a psychological goal behind pop music that I find to be fascinating,” Marceau said. “Essentially, it gets you addicted to the song. It’s why they’re all so infectiously catchy.”

Looking forward, she wants to continue working on perfecting her mastering skills and expanding her body of music.

“Everyone has the capacity to write and create their own music, whether or not they think they can,” Marceau said. “I just want to be an example of that, and to be someone who inspires other to do it was well.”