Mostafa: A little bit of love goes a long way 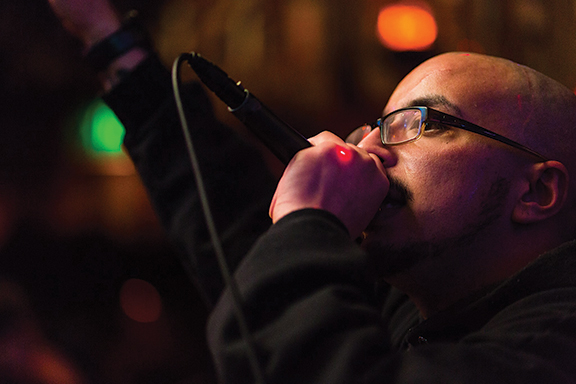 (Note: The print article contained an error regarding the production of L.B.O.L. We apologize for the error and have edited the online article.)

Local hip hop artist Mostafa focuses on love in his new album, L.B.O.L., which is no small feat, considering some of society’s current fixation on negative news and vibes. L.B.O.L., which stands for Little Bit of Love, dropped late last month and marks Mostafa’s eighth album.

Happily, the new album carries forward Mostafa’s signature sounds with slow and patient beats, punctuated by the undertones of jazz. Delivered in a deep timbre, Mostafa’s lyrics are introspective with the eye of a skilled poet.

In fact, the 10-track album features not one but two poetic pauses, allowing listeners a moment to catch up to Mostafa’s themes. “Heart Pump Interlude” and “Heart Pump Outerlude” are each roughly a minute long, the beating of a heart delineating the album’s distinct parts.

Mostafa’s ability to see through contemporary contentions may derive from his past. As a child, Mostafa, born Nadeem Mostafa, moved around a lot with his mother and older sister. He was born in Cairo, Egypt, but also spent time in Oklahoma City, and some could view these two cities as opposite ends of a cultural and physical spectrum.

Music has influenced Mostafa since he can remember. His mother would play her favorite songs in the house and he recalls admiring his sister’s tape collection, losing himself in the album art. He used music to help him navigate the growing pains of adolescence and he credits it with helping him cope during times when he felt very alone.

“Music kind of reached out and grabbed me because through the experiences and emotions of others, I didn’t feel as alone all of a sudden,” he said.

The name Mostafa means “chosen one” in Arabic, but to Mostafa, it signifies family. “My father had that name and his father before him,” he said. “Now my son has that name.”

Mostafa doesn’t rap about things he doesn’t know. In his songwriting, he draws inspiration from every aspect of his daily life, whether it’s something he went through personally or something experienced by someone near to him. He lists hip hop artists Landon Wordswell and Deep Lemon among his go-tos for inspiration. He has worked with both artists on and off for a long time, and in general, Mostafa said that he draws musical influences from his peers and the people with whom he has worked directly.

“It’s almost impossible not to be influenced by those you create, build, and surround yourself with,” he noted. “I always value their opinions over others.”

In terms of showing a little bit of love, Mostafa spreads lots of it when it comes to collaborating. He has performed with a long laundry list of who’s who, both locally and nationally, including My Dad Bruce, I-5, Deadly D, Sir Mix-A-Lot, and Talib Kweli. In addition to Landon Wordswell and Deep Lemon, he also regularly collaborates with Gift of Gab (Blackalicious). Mostafa has toured all over the U.S. with Gift of Gab, One Be Lo, and Landon Wordswell. He also regularly performs live with a trusted group of musicians, including Matt Taggart, who plays bass, Oskar Kollen on keys, Nick Robinson on drums, Ryan Nutter on guitar, and vocalist Bailey Martinet.

Mostafa has a prolific output of music. He has eight albums under his belt, though not all are currently available. L.B.O.L. gradually emerged after two years of patient work by Mostafa. The main theme of the album is not just about love, but how little of it is required to make a difference.

“I think everybody has their own ideas of what love should be based on their experiences with it. A lot of people seem to have this idea that love is some grand gesture, but it’s not. It’s in the details,” he said.

The album comes with a 24-page booklet featuring heart art by local designer Miss Mandible, and it features a bonus track on the CD version as lagniappe. In addition to the trusted group of musicians Mostafa performs live with, the album also includes guest appearances from Blaise B., Landon Wordswell, and Carl Roe. Roe mixed the entire project and D-Sane mastered it.

“I’m very proud of everybody involved in the project we created,” Mostafa said. “I really want people to get a physical copy and experience the whole thing.”

He is currently focusing on the promotion of his new album, which includes a release tour scheduled for June. He is also planning to reconnect with Deep Lemon for a new project but is staying mum on the details.

Mostafa currently performs at Boscoe’s on the first Saturday of every month, where he DJs and hosts open cyphers. L.B.O.L. can be purchased in Bellingham at Avalon and Everyday Music, or downloaded digitally at www.followmostafa.com.

Now, I’m easily tickled by a real rollicking roll in a tongue-twisting tryst. The kind where your head nods and foot taps and you throw a hip into it just to pick up on that indescribable cadence that a certain group of words strung together can have. Even if you don’t consider yourself a particular fan of spoken word or poetry, sometimes you just have to surrender to a pointed sound. 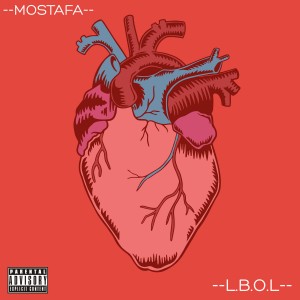 And Mostafa has that sound. He has absolutely brought it – “it” being the alliteration game – in his latest album L.B.O.L.

The magnitude of continuous consonants in the intro alone is dizzying, in the best way. Like the beat of a heart, it is steady and rhythmic throughout the album. “A Man Is a Man” winds listeners through a vice-filled journey of slow redemption, while “Have You Forgotten” is a call to bring substance back to our consumption of art, music, media and the like. The significance of the messages in both of these tracks are only highlighted by the punchiness of the verses.

“Bullets” hits with sheer force. Blaise B and Carl Roe join in on the track with speed and vigor. There’s a smugness that goes along with this song’s ode to rising above haters and critics: “Hit the spot, just to celebrate, let ‘em hate, evolutionary how we elevate.”

The album’s namesake track has a melody reminiscent of Atmosphere’s “Sunshine.” It transports you to a day of sitting on a front stoop, staring crinkly-faced directly into the sun; this one warms you all the way through.

Musically, the whole album is just so… cool – a supremely drab word to describe this collection of lexicon-driven tunes. L.B.O.L. is a soundtrack that looks forward to consistently brighter days and yearns to be blasted from an open car window. A very big tip of the cap to Carl Roe and D-Sane. The beats that back these tracks are rare, unique and will only appreciate in value. Essentially, a current day musical Beanie Baby.

The bonus track “I Need Your Love” delivers a simple yet impactful theme with all listeners: a little bit of love goes a long way. It’s nothing extraordinary or exorbitant; just a simple acknowledgement. It’s the little bit of light we need in this pickle of a world we find ourselves in right now. The vocals on this track – while just a bit overwhelming in contrast to the easy flow of words from Mostafa – are that final punch that bring the heartbeats of this album to finality.

Even the album art brims with positive significance. Illustrations of a heart that has seen better days, stitched up and hanging on by a (literal) thread slowly heals and finds itself thriving as a beautiful tree. Only a special place like Bellingham can produce such optimism and growth from destruction.

Mostafa’s most current creation is a palatable pleasure to propagate. Laden with thought-provoking verses and unstoppably catchy beats, this album beseeches listeners to keep a thesaurus on hand.