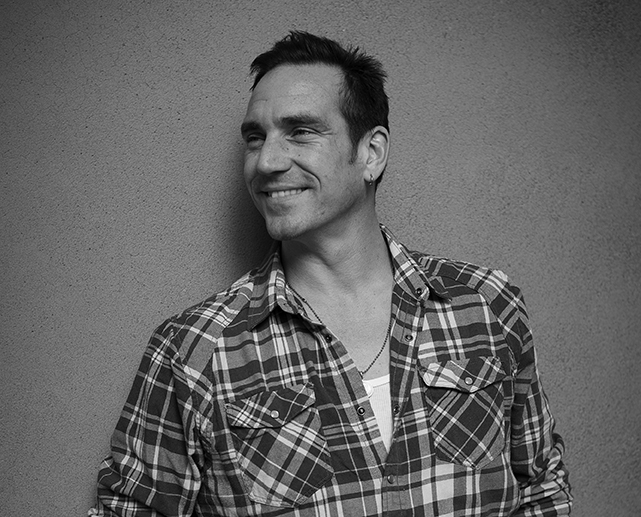 While you may not automatically know his name, I’m sure you’re familiar with the work of Mount Vernon’s Josh Clauson. From his band, Flowmotion, to his creation of the Summer Meltdown music festival, Josh has played a role in some corners of the Pacific Northwest music scene.

The festival is bigger than ever and Josh has just released a solo album – which makes this the perfect time to ask him 11 questions.

Ladies and gentlemen, may I introduce to you, Josh Clauson.

Who are you and where did you come from?

My name is Josh Clauson. I grew up in the rural community of Trafton, a couple miles from Oso, WA. I’m the youngest of seven kids.

Do you remember the first time music really had an impact and you realized it was something you wanted to do in your life?

Wow – It’s so hard to choose one moment….but if I had to pick one, I’d say it was the first time I performed at a music festival. I was 16 and my band, My Funktional Family, was given the opportunity to play the main stage at the Garlic Festival. This was a magical event in Arlington that was like a mini Woodstock, with bands, bonfires, and drum circles. It was hosted by the Israel Family, a large commune that lived on a ranch outside of town. They had hundreds of members and their festival would attract thousands of attendees each year.

The year before, Eddie Vedder and Krist Novoselic of Nirvana had showed up at The Garlic Festival by surprise to play a set with one of their side projects. This was in the mid 90s so these guys were at the top of their game. Standing in front of Eddie Vedder while he sang The Walrus on a small stage at the Israel ranch was a game changer for me.

So the chance to play our original music on that same stage the following year was AMAZING! Our friends were all freaking out, and we were having so much fun performing that we didn’t stop after our set time ended. Finally, in the middle of one of my guitar solos, the emcee had to come out and grab my guitar neck to get us to stop. I actually have this performance captured on cassette tape. It was epic and that’s when I realized I wanted to be a performer.

The Meltdown is your baby – how was the impetus for starting the festival?

The real impetus was that my band and I wanted to play shows but were too young to play clubs. We could play in bars, but none of our friends could go. So parties were where it was at!

Right around the same time My Funktional Family played the Garlic Festival, I started hosting my own parties. I had a little room in my barn that we painted and called the Glow Room. It was our rehearsal space and we’d throw crazy all-night parties there. The room was tiny, but we packed people in and rocked out for hours.

My first time hosting a bigger party was in Oso. It was a surprise birthday party for a friend that we turned into a mini festival. I built the stage out of airplane pallets, booked a few local bands, and a couple hundred teens showed before the cops came and shut us down.

By the time I was performing with my band Flowmotion, Meltdown was one of the many parties we were throwing. It was a way for us to make a little money as a band and to invite our friends to a campout. The first Meltdown went so well that we decided to make it an annual event. Each year, so many friends would come together to make the event happen.

With that, how has the festival grown over the years, and is it what you’d hoped it’d eventually become?

The festival has grown slowly and organically through a lot of hard work and sweat equity. It’s hard to comprehend that we’re heading into our 18th year! Five years ago, my wife became my business partner and with her help, we’ve been able to keep up with the growth. Summer Meltdown is definitely what I’d hoped it would become, but it’s always in a state of evolution. It’s a beautiful event with a great community vibe. I think our attendees can feel the love that has gone into the event over the years, they know it has roots. There’s a real family and community that has helped create this festival over the years and I’m so grateful for that. It’s a multi-generational event now. My son is 17 and he and all his friends have grown up attending Meltdown with their families every summer. It reminds me of how I was impacted playing the Garlic Festival at 16 years old. We’re a community.

Throughout the years within Flowmotion, what was the ultimate highlight?

Oh man, I’ve had SO many amazing experiences through the years. So many!!! You’d think it’d be the time we played The Fillmore or some other great venue, but it’s actually nothing even close to that. The most incredible and impactful moment of my time with Flowmotion was playing at Folsom Prison. It’s hard to describe this. It wasn’t like the infamous Johnny Cash performance we’ve all heard about. We were brought into a small room to play for a group of men who had been given life sentences. This was a program that a dear friend of ours worked on to bring the arts into the prison system for healing and support. We were all so nervous, but once we got in there and started to play all of the walls and the intensity melted away. It was so powerful, and the positive messages in our songs seemed to have more meaning than ever. After our set, we ended up listening to our audience’s stories, hearing some of their songs, and connecting in a positive way. The medicine in music and the ability to communicate through it was crystal clear. I always knew it, but this was a real moment of truth.

How does your solo work compare to Flowmotion in style and substance?

There’s really no comparison, which is why I love it so much. My solo material is simple, layered soundscapes that focus on the subtleties. My vocals are in a lower register and most of the lyrics are written by my amazing wife, Genevieve. The title track, Driftless, is a three chord progression with no bridge or changes, just layer after layer built into it. The guitar progression is like a meditation. I couldn’t stop playing it when I first wrote it, and I started layering parts over it. Then Aaron Guest and Michael Iris put the cherry on top with the sweet sounds of the Rhodes piano and slide guitar.

Flowmotion is all about the busy, funky, noodle-guitar stuff. Which I love! 10 minute guitar solos are not uncommon at a Flowmotion show! There are zero guitar solos on my recent album, Driftless. It’s been a fun departure and a great collaboration for my wife and me. We get a lot of joy out of creating music together!

Throughout the Meltdown history, what are the top five bands you’ve seen?

Sir Mix-A-Lot 2014 – Believe it or not – he absolutely slayed it at Summer Meltdown. We have never seen the beer garden so packed and jamming!

Tycho – 2015 – one of the most amazing and beautiful sunset moments at Meltdown! Truly magical.

Allen Stone – 2014 – Easily one of the most talented artists to come out of Washington and delivered a stunning and heartfelt set at Meltdown.

Ivan Neville’s DumpstaFunk – 2010 – Ivan Neville and his NOLA family are as good as any Herbie Hancock or Sly and the Family Stone show! They absolutely crushed Meltdown with one of the most insane sets I’ve ever seen.

Odesza – 2013 – Just before they literally exploded onto the world stage – they had a support slot to Blue Sky Black Death in the late night tent!

Is there a band you’ve always wanted to see at Meltdown?

I saw Macklemore at the Wild Buffalo a couple years ago. It was such a phenomenal show. Way better than I anticipated. I enjoyed the vibe and really appreciated how he kept his promise to return the venues that supported him on the way up. He’s all about staying true to his roots and sharing a positive message, and Meltdown is too. We’d love to host him someday.

What do you see the next five years?

For the next five years, I’m going to focus on writing more solo material with my wife. I’d like to find a way to take my music over to Europe. I’ve haven’t travelled outside the country very much, so I’m looking forward to exploring overseas with Genevieve and taking our music with us.

For Flowmotion, I want to continue performing a few local shows every year. I don’t foresee us going back into the studio, but you never know! We’ve just been enjoying playing the tunes and keeping the dust off my electric guitar!

For Summer Meltdown: I’m excited to celebrate our 20th anniversary. Who knows what will happen in the next five years. It’s hard to predict this kind of stuff, but the fact that we’ve got 18 years under the belt makes me very confident that we’re going to be around for years to come.

If you didn’t live in the Pacific Northwest, where would you live?

I love it here!!! I honestly can’t imagine living anywhere else. But if I had the option to have a second place to hang, I’d gladly be spending more time in Kauai.

Keep on pushing to the positive side! It’s easy to get discouraged with all the crazy shit going on in the world. All the division. People are hurting and it’s not always clear how to help. We have the ability to make change. There’s no simple answer as to how, or what to do, but if we keep working on ourselves, working in our community, to be a better version of ourselves, we can make a difference. Take time to connect with your community and keep growing strong roots here.