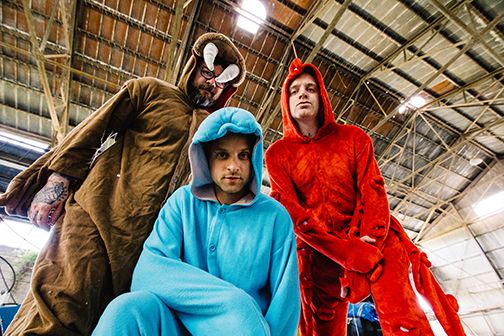 Longtime friends and musical allies, Earth Years, are here to reinvigorate a breath of fresh air to the heavier side of progressive rock. Featuring Bellingham veterans Rich Canut (Black Eyes and Neckties, sound guru) and Josh Holland (Black Eyes and Neckties, Wild Throne) and Peter Hilleary (Todos Somos Lee), their new project of groove laden, technical grit has officially hit the stage. Back are the days of odd time signatures, intense vocals and forward-thinking riff heavy composition with one goal in mind – honest and creative exploration.

The trio met 15 years ago in Bellingham’s poignant punk rock scene. They played and recorded together and formed a bond in local community.  For bassist and Alaska native Rich Canut, “the local music scene was the primary reason I stayed here.” Long time admiration for each other’s talents as musicians became the impetus to form Earth Years.

After the disbanding of Wild Throne in 2017, singer/guitarist Josh Holland wasn’t sure when he would start playing music again. “I pushed myself to get back into it,” Josh acknowledged, “knowing it would be the best thing for me.  Knowing Peter and Rich were 100 percent in made it easy and fun.”

This band of brethren are here to share “accessible prog – making the complex seem and feel easy to an audience,” according to Rich.  For drummer Peter Hilleary, “keeping the watermark high for peer listeners, music heads and creative diggers” is what Bellingham’s scene is all about. Earth Years does this in spades with songs that feel like epic journeys into other worlds. “Support and receptivity to experimentation and general weirdness,” Josh added, allows for a big city/big ego weight to be taken off. Instead, the focus for Earth Years lies intensely on the art.

As songwriters, Earth Years value group writing, leaving enough space to explore and “embrace the process… to those lightbulb moments down the line,” Josh explained.

The result is a band rooted in gutsy dynamics with power and punch at the core of their sound.  Moved to action by 70s prog-rock outfits Yes, Pink Floyd and King Crimson, Earth Years also mix in the urgency of hardcore/punk bands like Refused and Botch, offering a most dazzling and enthralling live performance.

The band is still defining its sound piece by piece and “getting riffs to their happy place quicker,” as Peter described. The huge emotive element which sets Earth Years apart is the vocal prowess of singer Josh Holland. “The vocal for me lately is kind of the whole game. It’s why I listen to so much pop music – it’s all about the vocal and song craft.”

“The vocals tell the audience where to look in terms of dynamics,” added Rich, “and it’s important for the rhythm section to read this and create the right foundation for it.”

Earth Years’ songs can last seven minutes yet flow with seamless movement, making for a meditative and enthralling listening experience. The end result is a band where vocals nest as a fourth dynamic instrument, grounding each song with passionate melody and allowing the space created by the Earth Years band to shine.

Playing live is a cathartic draw for all three members. “I learned if I go too far energetically I’ll knock my stack over or break my bass, so I try to maintain as much as possible,” Rich said. “The best shows – from both a performer’s and listener’s view – have full commitment,” Peter continued. “We all have that unspoken mindset in this project.”

With music so next level, their message is unabashedly direct:  “It’s ok to wear something other than black t-shirts.” Check in with them through Facebook for upcoming show and music release announcements.

Earth Years is playing a benefit show June 7 at The Wild Buffalo to raise money for Rich’s wife, Kelly Hoekema, who has had ongoing melanoma for several years. Increased costs of ongoing care have resulted in an ever-elevating stack of medical bills. The show will feature five amazing bands, a raffle/silent auction from local tattoo shops, bed and breakfasts and a ton more.