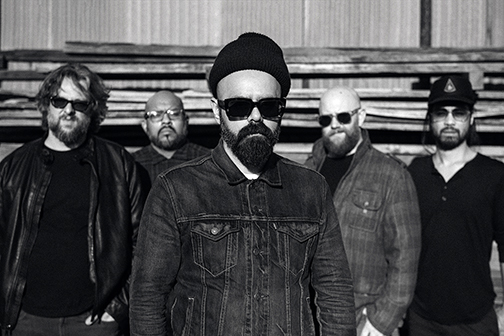 Here Lies Man’s Marcos Garcia grew up in the suburbs of New Jersey almost destined to make music. His father, a Latin music record producer, and his mother, a Latin/Cuban music DJ, surrounded him with music almost constantly. It’s as if Garcia was born with a certain celestial affliction towards the beat of a drum, a shake of the hips.

He recalls having first been introduced to afrobeat in his early 20s while listening to Fela Kuti, a Nigerian multi-instrumentalist, musician, composer and pioneer of the afrobeat genre, known for combining West African music styles with American jazz and funk influences. For Garcia, this was more than an instant connection, it was as if he had known these sounds his entire life. It was a calling.

Soon after, he began playing guitar with Antibalas (Spanish for bulletproof), an afrobeat group modelled after the works of Kuti that also combines elements of jazz, funk, and Cuban drumming. That was in 2003 and now, 15 years later, Garcia has embarked on a project of his own making.

For this work, Garcia teamed up with former Antibalas drummer, Geoff Mann, to create something that, well, had never really been done before.

“In 2005 I got this sort of lightbulb moment of playing afrobeat with rock sensibilities,” Garcia recalled. “It took 10 or so years to actually develop, but it ended up coming together with Mann, who, like me, understood both African and rock vocabularies and was curious to experiment.”

Garcia explained that at the core of African and African diasporic music is the clave, a rhythmic pattern used as a tool for temporal organization in Afro-Cuban music. This is a key pattern, or fundamental pattern, guiding rhythmic decorations. For some, like Garcia, it has an almost mystical quality where there is a certain mathematical symmetry and beauty in it.

The work of Here Lies Man is guided by the clave as an ever-evolving, ever-unfolding element. Garcia has the clave internalized, he said, and can feel when the music they are creating  is or isn’t in alignment with it. This means making music is a somewhat delicate balance of feeling the rhythm and translating it to sound while also calculating when it is on and when it is off.

“It’s about putting yourself in the position to receive the transmission,” he said. “A lot of that means being conscious of what we are creating musically, while also creating much of it on the spot.”

Here Lies Man’s most recent work, You Will Know Nothing, is set to be released June 15 on RidingEasy Records. With 11 tracks, this album is said to “expand upon the band’s exploration of heavy riff-based rock and psych within the ancient rhythmic formation of the clave.”

Garcia and Mann recorded the album at their L.A. studio on a Tascam 388 8-track tape machine. The basic tracking process was finished within a few weeks, but the mixing process took more than a year. Garcia attributed this to the necessity of producing other artists at the studio during the time, continued work with Antibalas, and an acute obsession over frequencies. Richard Panta and Reinaldo DeJesus both added percussion to the record while Victor Axelrod added keys.

The title of the album somewhat sums up Garcia’s attraction to the clave – that everything is interconnected, one rhythm. But also that we, humans, no nothing, or “no thing” when compared to such enormous waves of energy.

It’s deep, yes. But it makes sense coming from someone who has been surrounded by music their entire life. This particular rhythm, the one of Here Lies Man, the one you will here on You Will Know Nothing, lives inside of Garcia in the same way a painter knows how to make shape of their thoughts and feelings using a palate of their being, or in the way a chef can sense when a recipe is going to work or not.

Or, as Garcia said, “I am an artist, fundamentally, and music is my medium.”