WEEED: All you need is This 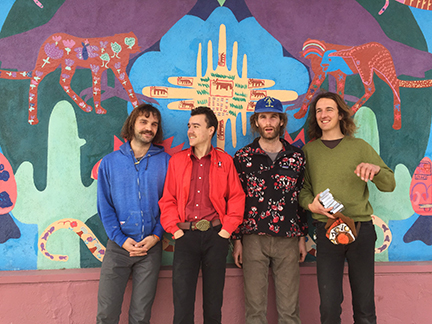 I spoke with WEEED’s John Goodhue last month as he drove through Badlands National Park, South Dakota. He was headed west, to Portland, where he and the rest of WEEED plan to live together, all in the same city, for the first time since graduating high school a decade ago.

Goodhue has a soft voice, boyish laugh, and speaks in slow contemplation. He doesn’t struggle to articulate thoughts, feelings, and concepts. A general tone of hopefulness could be sensed as he spoke about WEEED coming together on the West Coast again after so many years apart.

The goal, he said, is to see where the band can take them. It’s important to distinguish here that “the band” is not just a group of guys who make music together. No, no. The band, for them, is a collective entity, something beyond their individual selves. It is the whole of four separate parts.

WEEED’s Facebook profile declares their “Interests” as “Unconditional Love”, which Goodhue described as the first phase of them being a band.

“Love starts between the four of us, band or no band,” he said. “As it pertains to the band, fundamentally, all of us are best friends and friends first. Our relationships have grown through the band and the band has formed by the kinship of one-another. Unconditional love is the cornerstone for what allows us to play.”

The second phase, he said, is channelling that essence through the music by using their sound as a conduit to spread the love. At their strongest, WEEED’s live shows act as a closed loop of energy where they are giving love out and receiving it back over and over again, Goodhue described.

Nourish and be nourished.

This is a sentiment that has remained the same since WEEED’s Bainbridge beginnings.

In the time since they graduated high school and went their separate ways, WEEED has put out more than four albums, added an “E” to their name, toured the United States, one member has become a father, the list goes on. They have been physically apart, yes, but remain always together.

I recall seeing them play live in Bellingham a few years ago, at both The Shakedown and what was the Loud House. WEEED’s sets were beyond energetic and inviting – something about this band may be best described as transcendent. It is clear that Goodhue enters a special place of solitude behind his kit, Gabe Seaver (bass, vocals) and Mitch Fosnaugh (guitar, vocals), with eyes closed and heads nodding, become something of a meditative leader duo. It’s listening to an Earth album, Sleep too. But it’s also floating in a pool next to a waterfall.

“What I would love for people to leave a show having experienced is something sort of similar to that which I had,” Goodhue said. “A form of meditation with a sweaty and drawn-out delivery. Not having thought about too much, focussing on one thing at a time.”

Most recently, WEEED added Evan Franz as a drummer, making them one of many bands to enter into the dual percussion category. Franz debuted with the band on their most recent album, This, released June 1 on Important Records, who have described the work “an expansive musical vision and an astonishingly mature sound from a young band.”

This continues WEEED’s exploration of woodwind instruments, synthesizers, and ambient and vocal looping that was heard in Meta (2017), while also expanding on the intention of unity between each member. Inspiration included the music of the North African ethnic group Gnawa (think desert blues), as well as folk, jazz, and orchestral influences. The album was produced and recorded at Bear Creek studio in Woodinville, WA.

WEEED wrote and developed This primarily on the road and during practices, where they were able to suss out how they wanted it to sound, generating it piece-by-piece in live settings while touring in order to figure out how to play it in full, Goodhue said.

“The vision for this album was our most expansive yet,” Goodhue said. “We were able to see how we could connect playing together with a new person in the mix.”

As a result, he feels the work is more mature than anything they’ve created in the past and attributes that quality to a willingness to explore a bit more.