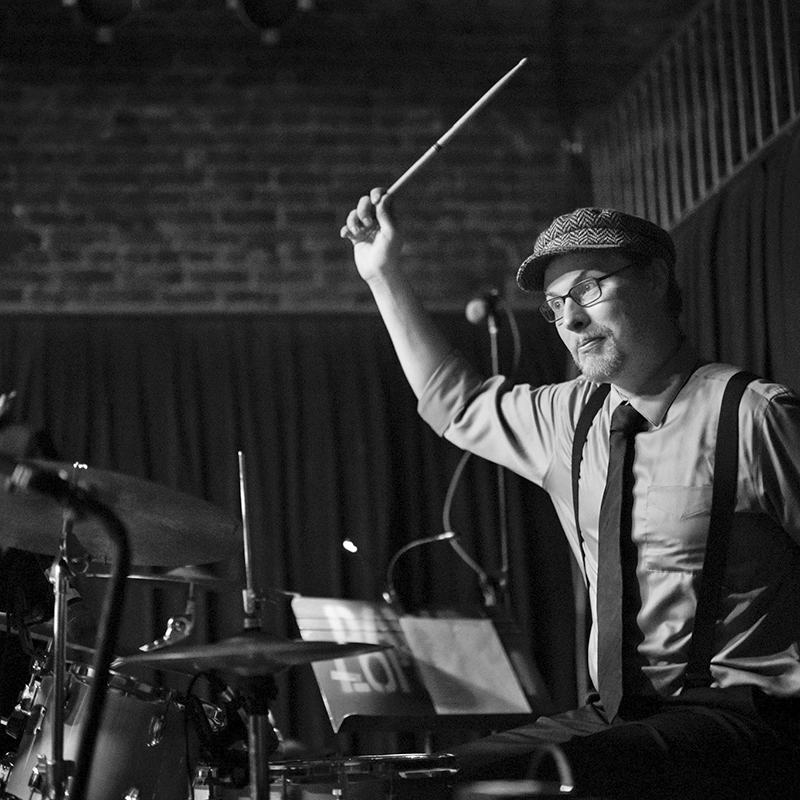 The first time I met David was many years ago… ha! actually, it wasn’t, it was in May when David had me over at Binary Studio to be on his podcast. I’d been in touch with him times before, but this was when we got to chat face to face – and David was damn delightful.

It didn’t take long for me to realize in our conversations that he was the real deal – an example of what makes Bellingham’s music scene so damn cool.

And with that, may I introduce you to David Lofgren.

Who are you and where did you come from? Please tell us about yourself.

My name is David Pender Lofgren. I grew up in New England, in the town of Kittery Point, Maine.

You’ve recently started a long form interview based podcast on the Bellingham music scene – what was the inspiration in getting that going?

I have been wanting to produce a podcast for years. Like a lot of folks getting into podcasting these days, I fell in love with audio storytelling when I started listening to This American Life and, later, Radiolab. I was constantly impressed with the producers’ abilities to create such a compelling and immersive experience.

I have day-dreamed about all of the different podcasts that I would like to produce, but I was always overwhelmed with ideas and short on time. I eventually started discussing my idea to produce some sort of podcast with friends and got a lot of encouragement to take the leap. My fiancée Alie encouraged me to attend a podcasting conference in Seattle this past winter, which gave me some good inspiration, and finally I put out a call on Facebook looking for a sound engineer that was interested in collaborating. As soon as I saw Andy Rick’s response, I knew that this thing was a possibility. I’m really lucky to have him involved in the project.

As for the format and focus of the podcast, I knew that there would be a steep learning curve. Andy and I agreed that we wanted to put out a high-quality, professional sounding product from the beginning, and so we decided to keep it relatively simple. I have been playing music in Bellingham for a decade now so I have connections to these people. I have always loved listening to great interviewers talk to inspiring people. I’m now learning how hard it is to create those compelling conversations, but I’m having a great time!

What initially brought you to Bellingham and why have you stayed for the better part of a decade?

I came to Washington for the first time in 2006 to sail on The Lady Washington, an historic tall ship. I never made it to Bellingham on that trip, but the seed was planted that the Pacific Northwest was a pretty special place. After returning to Maine and doing some other traveling, a friend I had met onboard The Lady sent me a letter suggesting that I move to Bellingham. A month later, I boarded a train in Boston with two friends and headed West.

It’s hard to say exactly why I have stayed for this long other than this town has given me so much. I have developed incredible relationships in this town, I have been supported in music more than I had ever imagined was possible, and I’ve consistently been excited by what is happening around me here. There are a lot of people doing a lot of work to make this place special.

If you didn’t live in Bellingham, where else in the US would you see yourself?

It’s hard to imagine living anywhere else. The only regret that I have about living in Bellingham is that my family is so far away. My parents and my brother and sister-in-law all live in Kittery Point, Maine. I’m really lucky to have strong relationships with them, but I wish we lived closer together.

When I was a guest on your podcast, you asked if there was anything we could do to make the Bellingham music scene better… my answer was recorded, what are your thoughts on the matter?

Overall, I think we are lucky to have as vibrant a scene as we do. That being said, I would always like to see more institutional support for independent artists. We will need to find ways to shore-up support for the arts as Bellingham and the surrounding area gentrifies further. City-sponsored grants to support artists doing ambitious work? More interaction between WWU music students and the downtown music community? Tax breaks or other fiscal incentives for venues? I love the idea of putting a “tips for the musicians” line on the bill at restaurants and bars.

It’s a Saturday night in Bellingham and you’re out on the town – what are you doing?

What one local musician has inspired you the most? What about non local?

It’s impossible for me to answer that question, so I’ll put it like this: It’s hard to imagine that I would still be playing the drums if it weren’t for Will Glazier turning a jam session into a band (Snug Harbor) and then pushing that band to perform, compose, travel, and record. None of that performing, composing, traveling or recording would have been possible without the rotating cast of musicians that made that band possible, especially Justin Smith. I wouldn’t have met Cayley Schmid if I hadn’t been playing music with Aaron Guest and I definitely wouldn’t have started playing Irish music if Cayley hadn’t taught me how to play the Bodhrán. I wouldn’t be playing in Robert Sarazin Blake’s band if I hadn’t known how to play the Bodhrán, and I wouldn’t have learned so much about being a consummate sideman from Thomas Deakin and Joel Ricci if I didn’t play with Robert. I am just lucky to get to play with so many inspiring local musicians!

Do you remember the first time music put its hooks in you as a kid? Please go into that scenario and how it changed you.

I was a total musical theater nerd as a little kid. My dad comes from a family of Broadway Stagehands, so I got a chance to see CATS the musical when I was like eight and I was hooked after that. Seeing this chorus of people singing Andrew Lloyd Webber’s rock opera music while doing gymnastics in crazy costumes accompanied by a live rock orchestra… That was a crazy experience as a little kid. I wanted to be a triple-threat Broadway actor before I ever considered being a musician. A few years later, my grandfather, a big band pianist, turned me onto 1940’s jazz, and that’s the first time I remember feeling like I wanted to play music in a band setting. As you can imagine, I didn’t have a lot of peers who were into big band jazz or musicals, but I eventually found my people in the middle school band room.

Outside of the local music scene, what would you like to see change in Bellingham?

I am worried about the dialogue surrounding growth and urban development in Bellingham. I understand the fear of change, especially when it’s tied to property values and quality of life concerns (i.e. changing the character of our neighborhoods), but decisions made from a place of fear start to look like NIMBY progressivism. I hope that we can create a vision for the future of our community that includes affordable housing for young people and low-income people. Our community is growing and changing and will continue to do so. The move to allow DADUs scared a lot of homeowners worried about out-of-control development as a next phase. I hope we can take that anxiety and channel it into pressure to enact sensible restrictions on development that also encourage more density in neighborhoods.

Who are some of the guests you’ll be talking to in the upcoming months on your podcast?

We just released an interview with Cayley Schmid, fiddle player from Polecat and director of The Bellingham Irish Festival and The Bellingham Folk Festival. Up next is Julian MacDonough, Founder and Artistic Director of Whatcom Jazz Music Arts Center.

Who was your all time favorite show in town? Why.

The Punch Brothers at The Wild Buffalo in 2011 was pretty incredible. Seeing that combination of technical prowess, finesse, and super dynamic interplay from 25 feet away was really powerful.

Lucky Brown and The Funk Revolution at The Roost in 2010 was also really special. In the early days of Snug Harbor, the music that Lucky was writing and playing was our guiding light. It’s one thing to see a nationally touring act and have your mind blown, but when you can have your mind blown by players that you’ll run into at the grocery store the next day, it makes that type of musical mastery feel like it’s within your reach.

I’m excited to start developing a community in Bellingham around podcast production. If you have a podcast or are thinking about starting one, reach out to me! I want to talk with people about how we can support each other to build audiences, cross-promote our shows, and share experiences and resources!

Drop me a line at info@littlecitybigsound.com.

Oh! Also, listen to Little City, Big Sound and let me know what you think! Who should our next guests be?