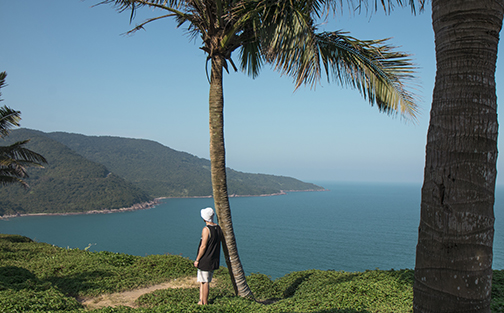 “Well it’s been a year Gary, what we doing this time?” I asked in regards to our last tour, one that consisted of seven states in five weeks. After considering if we should hit the same route and build on what we started or go somewhere new, the DJ’s response was simply, “Go big or go home.” I already knew what this meant. Seeing how our availability to hit the road is limited, we need to maximize our time spent away. Should we hit the East Coast this time? Or should we head somewhere that would add to our passports’ stamp collection?

One thing we discovered on our previous excursion – something initially done out of a desire to cut down on accommodation costs – was that hostels are awesome. Not only could you save yourself some coin but also they made it possible to meet a hell of a lot of people from all over the globe. Ones just like us, seeking adventure and new friends. This is pretty tough to do holed up in some hotel room. From a traveling hip hop duo’s perspective, this element proved to be indispensable in our attempt to spread our music. With this mind, we began thinking where we could find a location that provides a hostel circuit worthy of our cause. After some microbrew infused research sessions at McKay’s Taphouse, it was decided that Vietnam and Thailand were the destinations of choice. Enter Deadly D’s “Plant the SEADD Tour 2018”.

Both countries attract hostel goers from around the world. If you can accept that your life for the next month plus will consist of dorm style living with complete strangers, you will be introduced to a magical world that can only be discovered by stepping out of your comfort zone. Knowing that booking shows in such a foreign land would be difficult, we figured the environment would help streamline the process. With so many new people with insider tips, local staffers that could point us to the closest open mics and nightly activities such as pub-crawls accompanied by late night karaoke and freestyle cyphers, we figured we’d have little issue unearthing opportunities. So we decided to commit ourselves to find out and booked our flight to Vietnam.

A week before we set out I received a message from an old high school friend that read, “What time does your flight land in Ho Chi Minh? I’m picking you up.” As it turned out my buddy Matt now lived there. Seeing our flight arrived at 1 a.m., having a familiar face greet us upon arrival was a much better introduction to this new land than deliriously showing up at an airport with no idea of where to go. After a quick stop at Bui Vien – the street that never sleeps – for a beer and a banh mi, we crashed out a Matt’s apartment to rest up for our first day in the nation’s capital.

The first question raised in the AM was “Holy shit. How many people live here? And better yet, HOW MANY SCOOTERS ARE THERE?!” Turns out 8.5 million residents followed by 7.5 million motorized bikes. And by the looks of it, they all run and I swear they ALL do at the same time. It’s honestly something you must witness in person. Seeing how that many motorists, driving from all directions, can actually make it work. It’s the definition of organized chaos. The way it was put to me, “You can only focus on what’s directly in front of you. Don’t worry about what’s behind you because everyone there is doing the same thing.” Regardless, we figured it would be best to save our first scooter experience for another city.

One amazing aspect we discovered out there was the local expat communities (expats being individuals now residing in a country they weren’t born in) and their willingness to help fellow foreigners navigate this distant land. Utilizing each city’s expat Facebook group page turned out to be one of the most useful tools during our trip. In Ho Chi Minh City – or Saigon if you will – this process linked us up with our first show, only two days into our journey. Given the opportunity to link up with Ass Kicking Crew, the city’s #1 B-Boy posse, we couldn’t of asked for a better introduction to the local hip hop scene. Welcomed with open arms we were invited to play a show at Cipherz, a venue owned and operated by one of the crew’s OG’s Style D. The talent and humility of these cats was unreal. Representing hip hop in such a way that the US did in the 80s, they could do it all. MC, DJ, break, graffiti. All four elements were on full display.

Gary learned some new tricks on the tables from his new friend Phu. I was passing the mic back and forth with B-Boy Xell. Shit was ill. After many Larue beers and a spread of local street food, our first show in Asia came to a close. But not before we were invited to the weekends festivities: Ass Kicking Jam 2018.

HCMC’s annual B-Boy summit just happened to fall on our first weekend and we had no idea what we were in for. Bringing his Canon 80D, Gary figured this would be a prime opportunity to put his videographer skills to the test. With over 150 break dancers from Vietnam, Germany, Ukraine, Australia and beyond, what we witnessed was something even a camera can’t properly describe (though we will try… video coming soon!!). The creativity, originality, pure dexterity and stamina exhibited was incredible. We got to see the lil’ homie Xell take on and battle the entire Ass Kicking Crew as his initiation into the group. Proud to say he succeeded and we were able to witness history.  Even Phu who informed me that he doesn’t break and just cuts records proceeded to get into the action. Our first stop was insane. Alright, Vietnam. We see you.

From there we took a jumper flight to Da Nang. Hostel on point. Hopped in on a food tour and pub crawl to get the lay of the land. It was here where we worked up the courage to attempt our first scooter excursion. We’ll be okay if we can make it out of the city to the coastline where traffic is a little less intimidating right? Wrong. Within minutes we were convinced we would become one of those horror stories you hear of tourists who get acquainted with pavement in a bad way. Luckily this wasn’t the case and we finally made it to the beach unscathed. Good thing we did because this led to the most amazing jaunt up Monkey Mountain and built up a confidence to utilize the most effective mode of travel in SE Asia, which we capitalized upon the rest of the trip.

Equipped with a GoPro on Gary’s helmet we scooted on down Hoi An. Took a pit stop at Marble Mountain, pulled some touristy shit and let go of paper lanterns in the Thu Bon River via longboats and partied after hours at Tiger Tiger 2 Bar with our new friend and local guide Nguyen AKA “call me Justin.” After a late night cruise and Gary’s abrupt brush with death as he stepped off a cliff when attempting to take a leak, we made it somewhat safely back to the pad.

From there we proceeded north to Halong Bay, where we kayaked through caves and explored lagoons surrounded by islands occupied by communities of monkeys. We paid a local fisherman to take us and our newly formed production team of youngin’s from the Netherlands to a deserted dreamlike island for a music video shoot. Captain Bird took to the air for his drone’s inaugural flight. Vietnam is insane y’all. It’s such a beautiful place and the people are incredible. Visiting a place with a history coinciding with our own in the way that it does is humbling to say the least. Taking a walk through the war museum or a Buddhist orphanage to visit with kids still being affected by the tragedies their country faced due to our past influence, you can understand why emotions can run a little high at times. We will forever be grateful for all we experienced in this amazing place.

We could of spent our entire tour in Vietnam and still not even come close to seeing it all. But this would have to wait; we had to pick up our singer in Bangkok! So off to Thailand we go! Having lived there once upon a time ago, Lydia would not only act as our fellow bandmate but as a personal tour guide and translator as well. Which was great for a couple of clueless tourists. Another perfect timing “yeah we meant to do that” realization was that we showed up during the Thai New Year, Songkran. As a nation we should take notes because we’re doin’ it all wrong. Seeing entire cities engaged in an all out water gun warzone is waaaay more fun than fireworks. Especially spending it in Bang Saen, a place where locals who seem to have never seen white folk go for the holidays. Pure unhinged, positive energy.

We then made our way to the jungles of Chiang Mai, hit up the all night hip hop club “Spicy” and swam with elephants. Yeah you heard me. After we said peace out to the big homies we had to catch a flight back to Bangkok for one of our more influential shows. Connecting with SuperFly, Freshly Squeezed Sounds and everyone at Live Lounge BKK, opened up a world of possibilities for when we make our return trip.

Nearing the end of our tale we decided on our next destination. With Lyds headed back home it was up to us to finish this thing out strong. We’d be put to the test as we dropped our pin on Phucket and the infamous Bangla Road. Booking our stay at Slumber Party hostel, we discovered it lived up well beyond what its name might imply. This is where you go to party. This is where you go to dance at clubs with a capacity that could squeeze in all of Bellingham, a place that can really make you feel your age. I’m proud of how we faired.

Well there we were. Finish line in sight. A little over a month that felt like a lifetime yet went by in the blink of an eye. We returned to HCMC for a final farewell jam session with our Ass Kicking brethren before we headed home. Though this felt like home, too. Guess that’s why we do this. Always trying to find that Highway Home. Guess that’s why we’re already planning the next journey. ‘Til next time friends.