Sons of Rainier: Folk at 45rpm 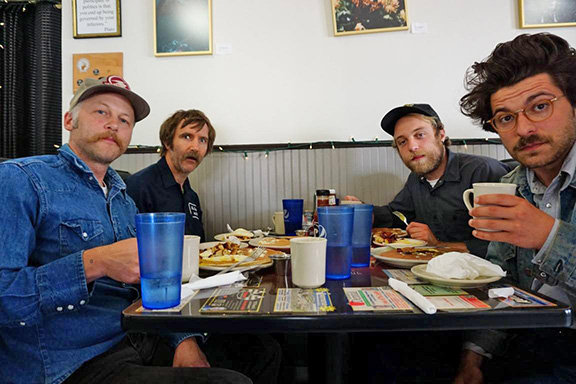 Sons of Rainier got their start in January of 2017 while Devin was living in Seattle. “I was writing songs that I was recording just at home without an intention. I was overdubbing harmonies – multiple vocal parts in my head. That’s when I approached my friend Dean (Johnson) to see if he’d be interested in singing with me.” Dean joined in, and soon suggested their friend Sam Gelband for the middle parts of the harmonies.

The trio came together and sang a couple times just for fun, but soon realized there was more to the project. ‘This sounds awesome, we should do something with it,” Devin recalled the trio thinking with a laugh. He added, “I don’t think I would’ve gone forth with a band if it wasn’t for their encouragement.”

Once they official formed as a band, Dean grabbed the guitar, Sam a snare and they brought in their friend Charlie Meyer, who plays with Sam in Honcho Poncho. “It was great, we were all so into it,” stated Devin.

While Devin has played in other bands, the Sons of Rainier is the first based entirely on his songwriting, though “everybody gives their own ideas for arrangement,” he added. “Dean and Sam both individually are really great songwriters and have their own musical projects going.” For Devin, the experience of playing his songs with these guys is amazing. “I feel lucky I have my band, it rules.”

After playing their first show in June of 2017, the band played and recorded, producing their debut Down in Pancake Valley which was released digitally in January of this year. While the band has played shows, even touring in the spring for three weeks, they haven’t done anything on the “business” stuff, according to Devin. “It’s really nice and appreciated when different blogs or publications decide to write about us for some reason. We’ve had a good response considering we’re just nobodies in a giant field of nobodies.” He added, “It’s amazing, we come up with something and put it out in the world and it really touches someone.”

The Sons of Rainier sound plays out a sampler of Devin’s record collection and influences. Loosely coined 45rpm folk, “you hear these different bits of different styles,” Devin explained, “I listen to a different styles of music, I’m a nerd for old music. I listen to tons of old records. The stuff that I’m writing is directly influenced by everything I’m listening to,” he said, adding, “A wide spread of the map of music – different times and styles (including) vocal duo wop and bands like the Everly Brothers.”

Some have described their harmony heavy sound as country while others hear a roots sound with old timey influences. “There are all these genres out there and I don’t know if we fit in,” he said.

Last fall Devin moved back to Bellingham, though the long distance relationship hasn’t slowed the band down much with practices still happening a couple of times a month. Sons of Rainier are working on a new album which they hope to record just after the Subdued Stringband Jamboree in August, eyeing a release in October before they take a month-long tour to the Southeast and back.

But in the mean time, Devin is gong to to enjoy being back home, where he belongs. “I absolutely love being in Bellingham, I never want to leave again, other than traveling. Hopefully I never do. I’m glad being back here – I’ve always felt nurtured by the community here – I still do,” he said. “It’s a great place to be.”

Check out Sons of Rainier with Louis Ledford and I Love You Avalanche on July 28 at Firefly Lounge. Follow their Facebook  page for updates.