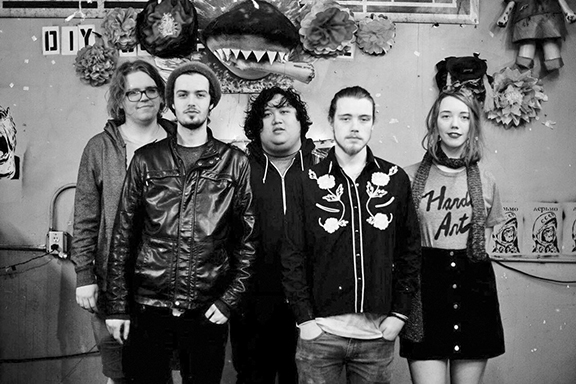 Hailing from Seattle, Special Explosion is a group of Seattle musicians who have played together since their after-school-program-born days of 2010 and debuted their first EP just two years later. The first show they played took place at an Eagles Club, and much of their early hype can be attributed to the band’s Soundoff performance, all at the tender ages of 14 or 15. This is a group of people who were pushing the musical envelope before they could even drive.

I spoke with guitarist Sebastien Deramat last month, who lamented about how easy those first years were – being driven around by their parents, having seemingly endless hours to practice, not having to pay rent.

“The fact we started so young is huge for who and where we are now,” he said. “Every opportunity we had then seemed like the best we’d ever have, so we took all of them. The optimism of being young was very advantageous.”

After graduating high school, all of them still under the age of 20, they set off on their first U.S. tour. It was eye-opening, inspiring, and taught them a lot about who they were as a band and what they could do, Deramat said.

It’s these early, formative years, that have lent to Special Explosion’s relatively expansive discography, their connections in the Seattle indie-rock scene, and their overall wisdom and practicality when it comes to getting work done.

Returning from that first country-wide tour, they were all hit with the reality of no longer being in school, no longer living at home, and needing to find jobs to pay for rent and food, not to mention upkeep of their instruments and recording time/material.

“We really had no idea how to live or what to do,” Deramat said, laughing. “So we didn’t tour much after that because we suddenly had less time for the music and began focussing on figuring out how to balance practicing and playing shows with making a living.”

Special Explosion continues to mature now, and this is reflected in their most recent album, To Infinity, a 10-track piece they released last year. Guitarist and main writer for the band, Andy Costello, explores the trials and tribulations of growing up, rockstar aspirations, and the crunch of reality. The sounds of this work are indicative of the band’s true-to-the-area tender rock sound. It follows suit with Built to Spill, Modest Mouse, Death Cab for Cutie – all of the Pacific Northwest favorites.

Too, there are some fresh sounds and essences on the album. This, in part, being a result of them writing and recording in studio with a real budget for the first time, Deramat said. There are vibraphones, modified vocals and treated drums, all to the queue of a sensitive moodiness born specific to the region. To Infinity took a total of four years to finish, with two spent working on the album and another two spent on break, contemplating the album. It is a compilation of work coming out of Seattle’s Hall of Justice, Portland’s Ice Cream Party Studios, and Marin County’s Panoramic House. It was released with Top Shelf Records.

“Making the album was a really emotional process for us as a band,” Deramat said. “We spent some time at a secluded space in California while doing the second recording, which we had never done before. That created a different feeling in all of us, I think, so the album is a result of the different emotions we were experiencing that we hadn’t necessarily experienced with our prior work.”

The name of the album may be indicative of their roots and bond as a group being endless, but with an overshadowing knowledge that they don’t actually know what is next for them. Consider the album art, too. A dollhouse Deramat found on Craigslist is placed inside one of their homes and photographed next to a drape, which hangs somewhat accidentally and somewhat nostalgically out of focus in the photo. This could represent the metaphorical house they built as a young band, and how they are working to preserve it as they experience life as independent adults.

“We really grew up through the making of this album,” Sebastien said. “I think it signified the end of a teenage band era and the beginning of something else for us.”

Catch Special Explosion at The Shakedown on July 20 with Great Grandpa and SiLM. Follow the band’s Facebook page for updates.