The Posies: Thirty years on 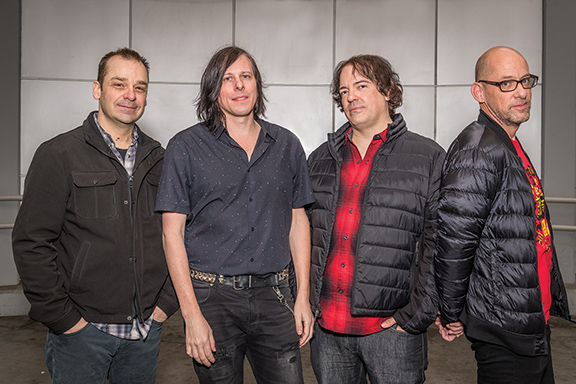 As with many music fans of my generation, especially those living in the Pacific Northwest, I’ve been a huge fan of The Posies – a band who initially got their start in Bellingham as teenagers at Sehome High School. At a time when nine of ten bands were heavy, The Posies were crafting perfect guitar pop songs with warm vocal harmonies. They made pop music and were unbelievably good at it.

Could I have imagined all those years ago that I’d be talking to Ken Stringfellow about The Posies’ 30 year anniversary tour, while he readies for a show in Denver and I’m in pajamas on a rainy day at home? And what about the rerelease of their albums and coming back to Bellingham? No… but I realized as I talked to Ken how excited I was to hear about his days in Bellingham and what it’s like to hit the road at nearly 50 years old.

“I was mercilessly bullied, beaten to a bloody pulp in middle school,” Ken mentions as he reflects back to late 70s and early 80s Bellingham. “Bellingham was a very different beast in 1979,” he said. “Very unprogessive. It was kind like a heshers vs freaks kind of world,” adding, “It was kind of scary. Music really was life or death for me and I could find a herd to belong to.”

Along the way, Ken befriended local musician Chip Westerfield (who still lives and works in Bellingham) and as a freshmen in high school, they met Jon Auer at Mojo Music which was located downtown. Jon had just moved over from Billings, Montana and had already become a legend in the small Bellingham music circle. They formed a short lived band, eventually Jon and Ken moved forward as a duo, trying to figure out together what made pop songs so good and so engaging. “Jon and I just had a different take on the whole thing,” Ken stated. “It’s what we thought about – what makes a song a great song, that was our quest. What’s the common denominator?” He added, simply, “We found a great song is a great song.”

In 1988, Ken and Jon, both just out of high school, released the pop infused Failure, which, to a large extent, put a shock in the heavy Pacific Northwest music scene – it was also the first album from a Bellingham band to gain notoriety outside of Whatcom. The Posies, in some regards, put Bellingham on the music map.

Ken and Jon soon moved to Seattle and, against the grain, became an immensely popular band as the likes of Pearl Jam, Alice in Chains, Mudhoney, Soundgarden and Nirvana were becoming international stars. As the Seattle scene drifted towards heavy and loud bands, The Posies continued to work on their craft, writing heartfelt and honest pop songs. “We were never part of the movement,” Ken stated. “We were always on our island.”

Much has been written about what happened between then and now. The Posies became fan favorites for years, being swept up in the Seattle music explosion without succumbing to it. They released records on a major label, toured all over the world, eventually leading back to independents, performed with Big Star, played in REM (Ken toured with them for several years), produced records, took breaks, came back together, and mourned the passing of two band members (Joe Skyward and Darius Minwalla).

It’s been a long and crazy 30-year ride, which leads the band to now, nearing the end of a six-week tour celebrating their three decades of music as well as the re-release of Dear 23, Frosting on the Beater and Amazing Disgrace in the upcoming months. The band is touring with their 1992-1994 line up which included Dave Fox on bass and Mike Musburger on drums; it’s a line up few ever thought would get back together, especially after Mike’s acrimonious departure from the band.

But here they are, sitting in a van together, playing dates like the old days, though now with a profoundly better idea how to communicate and having more fun. “In the old days, I didn’t know how to communicate. I had terrible conflict resolution instructions from my parents,” Ken said. “It’s a testament to how people can grow emotional,” adding, “There’s not enough money in this game that we have to put up with each other.”

For Ken, he’s also happiest when on the road playing. “I love touring and always have,” he said, adding, “You’ll be the healthiest and you’ll be the happiest.”

Most bands don’t hit five years, let alone 30, but for The Posies, going against the grain which they did three decades prior ended up being one of their biggest assets. “Our uniqueness that seemed like such a burden has allowed us to retain some sort of musical meaning. We don’t have that kind of legacy (of huge “grunge” bands) nor do we have those kind of problems – we have a great audience and we can tour and we have people who respect and love our music.”

See The Posies perform July 6 at the Wild Buffalo. Follow their Facebook page for details or visit theposies.net.