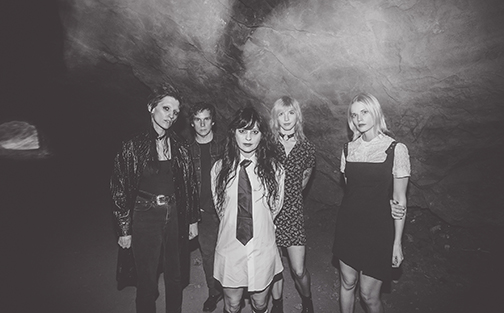 Los Angeles based Death Valley Girls have been sharing their eerily electric sound palette with audiences since their debut in 2013. Described as equal parts “sonic exorcism… desert blasted riffage… and occult menace,” Death Valley Girls channel an impressive array of moods and atmospheres while putting wild energy into every track. Now touring to support the release of their latest album Darkness Rains, the band is more potent than ever. I had the chance to speak with vocalist and multi-instrumentalist Bonnie Bloomgarden about the record, the tour, and the band, catching a glimpse into the arcane forces behind the group’s “dystopian doom boogie.”

Having released three full length albums, composition for Death Valley Girls remains anything but formulaic. Their songwriting process is spontaneously collaborative, as Bonnie explained. “I don’t know all the mysteries of the universe but one I know is that we have no idea where songs come from,” she remarked. “You go hang out with your friends in your band and you’ll be like ‘Hey I think I have this idea but I’m not sure’ and then you’ll just start playing it all together and then… you have a song..”

I commented that the writing process doesn’t occur so organically for everyone, to which she replied,  “It’s really weird. It doesn’t take any blood… sweat or tears actually. It just comes to you, if you’re with your friends.” This chemistry is readily apparent on wax as the band is locked in throughout, with each member playing off their bandmates exceptionally well. The whole album flows smoothly and sounds quite crisp despite the heavily distorted tones employed.

In fact, Darkness Rains is likely the band’s most thoroughly constructed record to date. Darkness Rains is an album that has a little bit of something for everybody. It’s dark, distorted, groovy and fun, a boiling cauldron of hot riffs, sharp beats, and searing vocals. Reflecting on the first two records and how the new album differed in recording, Bonnie remembered that “the first two were completely tracked and recorded in just two days… but this one (Darkness Rains) was over time.” She went on to explain, “We’re like ‘first take, best take’ kinda guys, so we don’t record the song that many times. But this particular album, we had an opportunity to go add a lot of stuff.”

This album also features many guest performances. Bonnie said, “There’s like a dozen different people that have listened to music their whole lives” who “came together and recorded together” on the album.

When I asked Bonnie about life on the road and their current tour, she said, “this is kind of our whole life.” For her and the group, “It’s not just like ‘oh this is the band’ and then we go back to our regular life. We do this every single day.”

Death Valley Girls live for their music, and like many bands, dedicate everything to sharing their music with others. Talking about their live shows, Bonnie said, “I think you will leave as happy or happier than you were when you came to the concert. That’s our main goal is to make people feel a little bit happier, you know?”

The live music experience for her, and so many others, is a life affirming experience. “When I see a show I really like… I want everyone to know about the band I love, they were so fun it reminded me of the things I like about life. And that’s what I hope can happen for you too. Happiness, joy, splendour.”

Catch Death Valley Girls on Nov. 15 at The Shakedown. For more information about the band, see www.facebook.com/DeathValleyGirls.