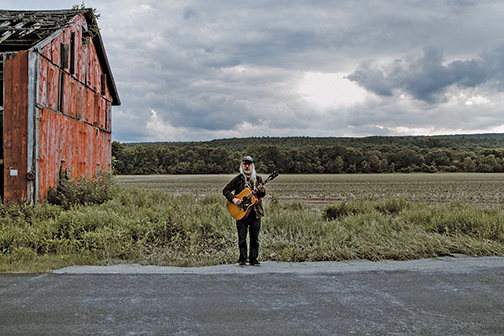 J Mascis was stressing about his new iPhone when I spoke with him late last month. He was in the process of switching from an old edition to a new one before heading out on his current tour, something he waited until the last minute to do. This came as sort of a surprise to me, for Mascis, on paper, doesn’t seem like the type of guy who would stress about much of anything. He is a notoriously soft-spoken artist whose answers to questions are limited to say the least. He often responds with an “I don’t know,” or, “I’m not really sure.” I had been prepared for this, but even so, the silences cut deep at times. But what he lacks in conversation, he makes up for in talent.

Born smack dab in the middle of the 60s as the youngest of his siblings, Mascis began making music in the 70s because there was nothing better to do, he said. The hippie culture in his hometown of Amherst, Massachusetts, both bored and irritated him, and his music was in many ways a hardcore punk response to this environment. The result of this apathy was Dinosaur Jr., an outfit Mascis put together alongside bandmates Lou Barlow (bass)  and Emmett Jefferson “Patrick” Murphy, or Murph (drums).

Mascis has spent the majority of his career on the road, touring with Dinosaur Jr. as well as various bands and as a solo performer. He now lives, for the most part, back in Amherst with his wife and son in a home built by the father of actress Uma Thurman.

His life as a musician started at the age of nine when he first sat behind a drum kit and continued on to play in his school’s jazz ensemble until he was 17. It was then that he joined his first band, short-lived Deep Wound, with Barlow, Charlie Nakajima and Scott Helland. Mascis formed Dinosaur Jr. not long after the end of Deep Wound, where he switched from playing drums to guitar and taught Murph to play the drums, a move he described simply as “…just something I needed to do to be in the type of band that I wanted to be in.”

Much of their early influence came from SST bands such as Black Flag, Meat Puppets and Sonic Youth. Dinosaur Jr. was signed to SST in 1984 and produced two albums with them in the few years that followed. This time, Mascis said, was when the band was at their peak. Barlow split somewhat dramatically from the band’s formation in the early 90s and they continued to play with a new bassist into the late 90s. Later, in the early 2000s, the original formation unexpectedly came back together for a European tour and a release of the first album of original Dinosaur Jr. material in nearly 20 years, Beyond (Fat Possum) followed  in 2007.

Through all of this, Mascis continued to perform in other bands such as Witch, Upsidedown Cross, and J Mascis + The Fog, as well as work on solo material. He toured with Kurt Vile (a personal favorite) in 2012 after Vile appeared on Mascis’ 2011 solo album, Several Shades of Why (Sub Pop). What can be gleaned here is that this is the type of musician who understands creating work isn’t necessarily an option. It’s just what he does.

Mascis debuted his first solo album, Martin + Me, in 1996, and has since gone on to produce six more solo works, the latest being Elastic Days (Sub Pop), which was released earlier this month. When asked what was on his mind while producing this album, he responded with a simple, “I don’t remember.” And, as far as his writing process is concerned, well, “it just happens.”

“I just have to get on with it and write it,” he said. “I usually wait to write until the night before I have to sing to record. It’s sort of like cramming before a test. I need that last-minute pressure to get it out.”

Elastic Days is Mascis’ first solo debut since Tied to a Star (Sub Pop) back in 2014 and his third solo work with Sub Pop. It was recorded at his home in the Winter and Spring of this year and, if it’s anything like his former solo albums, will be a somewhat melancholy acoustic piece with his ever-buried vocals hinting at something not quite tangible. With the addition of drums from a kit he recently purchased, listeners may expect a more rhythm-driven work than those of the past, but there is no doubt that it will be done in traditional Mascis style with a tendency toward free-rolling riffs and an air of everlasting apathy. The work will also feature Ken Miauri (who also contributed to Tied to a Star) on keys and guest vocalists such as Zoe Randell (Luluc) who will accompany him on the tour he was preparing his new iPhone for.

When asked what this tour will feature, he responded in a true, unelaborated Mascis manner: “Oh, just some songs off the new album and some old stuff, too.”

Despite his rather economical speaking habits, Mascis has been deemed one of the world’s greatest guitarists many times over. A title that is much deserved, for whatever energy he saves in saying less is clearly channeled into playing more.