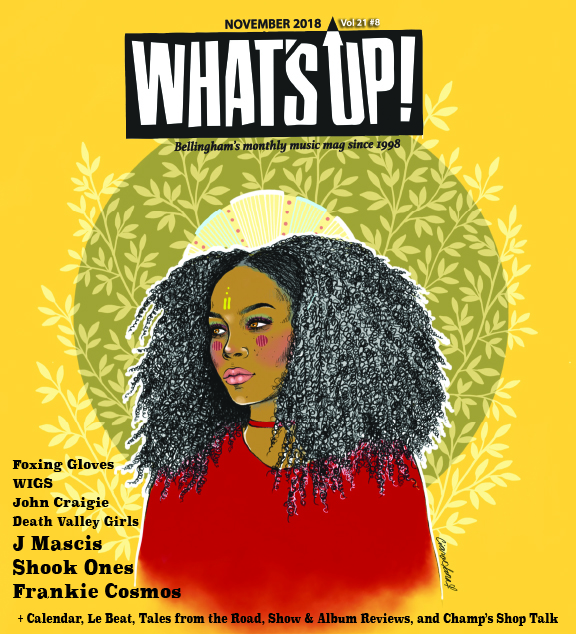 How are you all doing? I’m well, thanks so much for asking. Pretty happy the sun is gone and we’re back to rain… fall is it for me.

As per usual, I’ll start with a little What’s Up! news you can use. (Wow I hate myself for that one). I want to thank everyone for the kind words about the mag after I announced my impending retirement in June 2019. It’s good feeling some of you really appreciate these pages over the last 20 years. The mag has had a few minor inquiries, so I’m hopeful it will continue in good hands, but at this point it could realistically go either way. We shall see, so enjoy the goods while they’re going and if it ends, then it ends!

That’s about it from here on my end, I’ll get to some local music.

In spite of the fact the band doesn’t all live in the same state, the Illogicians will be releasing a new album in December, titled Mark The Time! While Jordan Watson now lives in Dallas, the band has been plugging away on the new release and are eyeing a show next month. Sounds like Jordan will be in town for the whole month, so hopefully there’ll be more than one show before he splits again.

One of my local favorites, Hello, I’m Sorry, have released Meloncandy and it’s really damn good. The band, which is based around Seth Little’s songwriting, has been around for awhile and evolved from pop darlings to pretty weird, revered pop darlings, which means it sounds wayyyyyyy more interesting. I’ve been listening to the release a lot – there are some cool nooks and crannies in there.

New Willdabeast is done, which is fantastic. I know Will and Dan really slaved over the sound. There’s no official word on a release date as of press time, but it’s officially off to be mastered, so hopefully it’ll be soon.

Digging Nate Kahn and the Maple Bacon Band’s demo, which came out just as we were going to press. Nate on guitar, Seth Little on bass and Sam Wesner on drums. It has a weird little late 60s feel to it. Check it out, the recording is on bandcamp.

East Coast Dave’s new record is about done. The solid gold was recorded with Stone Jones at Shadytown Studios. No idea on when it’ll be released, but sooooooooooon is what I’m thinking.

Have you checked out Net of Indra yet by Dean Evenson (Soundings of the Planet guru) and Tim Alexander (Primus, Pucifer)? It’s pretty trancy… like super trancy and absurdly relaxing. The record is a huge departure from what you’d think about a Tim Alexander sound, but his percussion and weirdness added to Dean’s atmospheric sound is a pretty sublime mixture. Also, Tim opened Herb’s Cider, which includes a tasting room on Bay Street. All things to explore.

The mighty Frozen Cloak has released another gem. They are one of the best “under the radar” bands the town has ever produced. They rarely play live but their recordings are so cool and so weird they make me pretty damn giddy.

Supermissive are releasing Trash is King this month with a release at the Bellingham Alternative Library on Nov. 13. As I noted last month, they took the summer off but are back with a vengeance. 2019 should be a good year as long as they keep everyone around. Great band, also super weird, also why I love them oh so much.

Chandler Trey Johnson is wrapping up a new EP titled Water Maiden, which, if I’m understanding his Facebook post correctly, was recorded at Western on analog. OR MAYBE HE IS DECEIVING US! I don’t really know, I just know I dig Chandler’s music quite a bit so new music is good news.

The Co Founder survived six weeks on the road and didn’t kill each other, which is an absolute miracle for any band. Because they had so much fun, they’re back at it, heading down to California for a few dates. Damn Road Warriors are what they are.

The Sheen played a few dates in Canada last month and will, hopefully, be releasing a 7” of improvised music soon. The goods were recorded in Ojai, California over the summer.

Hot Damn Scandal, who recently celebrated 10 years, is headed down to California from mid-November to mid-December, hitting places like Chico and Fort Bragg along the way. Love a band that tours – it is, in my estimation, the key to growing as a band and making fantastic music. Case in point: Hot Damn Scandal.

Petty or Not is the best Tom Petty cover band in Bellingham. Because Craig Jewell is in it and he’s the best. AHAHAHAHAH… seriously, apparently this band is REALLY good and we’ll be writing a story on them soon. Love the folks involved (members of Polecat, Acorn Project, Baby Cakes, etc.) and love the music. So, there’s a lot of love there. Love, love, love.

The superbly awesome Glitchlette is taking a little break from playing live shows over the next few months so she can complete her debut full length. I listen to her EP all the time so I’m stoked she’ll be releasing new material, but hadn’t seen her live yet so am bummed there… For me, this blurb is kind of a good news, bad news thing.

Molly from Shared Delusions has moved out of Bellingham with the hopes of moving to Olympia, so that band is kaput (as a band). Bummer.

Don White has sold Skylark’s Hidden Cafe in Fairhaven! Of all the advertisers we’ve had in the mag, I’d put Don in the top five of wonderful people I’ve gotten to work with. He’s the best and I’m going to miss working with him dearly! From what I can see, the new owners will continue hosting live music (at least the calendar is going through November, so that’s a great sign). Don, good luck on your future travels my friend!! Best wishes to you and thanks for all the years of support.

Finally, thanks to all buying bottles of HOSA over the last year (the hot sauce company I own with Andy Beer of No Guts/Saganist and Jacob Covey of Fantagraphics). It’s been a ton of fun and hard work, but really rewarding seeing folks get into what we do. Holidays are coming up and we’re gonna have some special happenings and ways to buy the sauce for the holidays, so stay tunedddddddd!

Enjoy November, and see you next month. I’ve gotta say, it’s a pretty weird knowing I’ll only be writing seven more of these. Final one will have tears and laughter throughout it!