Shook Ones return with a new album 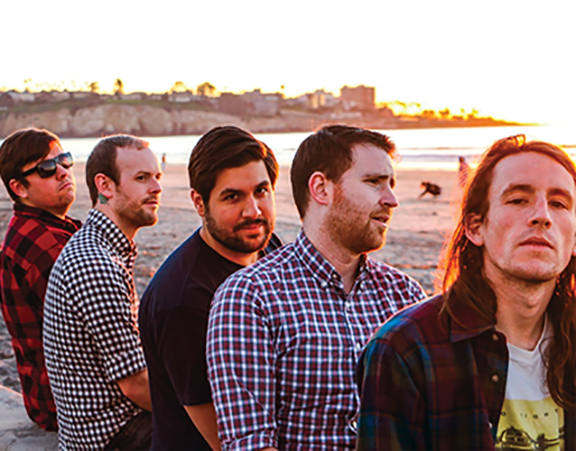 Back in the early 2000s, the Shook Ones burst onto the scene in a blaze of glory. Playing frenetic pop punk with crisp songwriting and fantastic musicianship, they were instantly a local fan favorite not only in the punk scene, but at large. As often happens, within a couple of years most of the members had moved to Seattle (except the legendary Bo Stewart), signed to a notable underground label (Revelation Records) and toured all over the world.

Eventually at the end of the decade, the band (Scott Freeman-Vox, Kelly Aiken-Guitar, Phil Jones-Guitar, Bo Stewart-Bass, Aaron O’Neil-drums) quieted down and over the next nine or ten years, they would play the occasional show or release the occasional single, change the occasional band member – they were still a band, but barely active.

Then news this summer came out they’d be putting out a new full length, Body Feels, on Revelation and playing more shows (though not doing full tours again). Fans, myself included, rejoiced as the world is a better place with Shook Ones in it.

Celebrating their new release, Shook Ones will be playing a show in Bellingham in November, which was a fantastic excuse to chat with my old friend Bo Stewart (Marv, So Adult, more bands than I can remember) about what’s going on in the Shook Ones camp.

Shook Ones have released a new album, their first in over a decade. While the band never officially broke up, it wasn’t active, so what brought everyone back together?

We played some shows in California a couple years ago, and sort of had that realization that we probably can’t do too much more of this kind of thing without a new record. We had put out a couple singles in past few years, but not a record. We started talking about the idea, talked to Rev about potentially putting it out and it grew from there.

How long did it take to record the album? Where was it done and who recorded it?

We started recording July of last year. Aaron and I did the drums/bass  with Jackson Long over two days at Soundhouse in Seattle. From there we did the rest of the guitar and vocal tracking with Phil Jones (who doubles as our guitar player!) at Hear Me Shimmer and The Loom Room, also in Seattle. We went with our long time friend Jack Shirley for mixing and mastering at The Atomic Garden in the Bay area. All in all, a real friends and family vibe. The whole process took roughly about a year from start to record-in-hand.

What was it like writing music and recording without the frenetic pace of being an active band? Was the vibe in studio any different?

I would say the only thing slightly different is that some of the songs, or at least ideas for songs, had been floating around for a lonnnnnng time. Not all of them, but there are some that had been in the demo phase since, maybe even the first record?!, that we polished up for this record. There are also contributions by everyone as far as the songwriting goes, that may be a first as well. Not sure that would have been different if we had been a heavily active band between the last record and now, but maybe?

Was the label initially stoked about a new record?

The label was into it (I think), we had done the second record with them and sort of kept in touch over the years. As part of this, we also gave them the other two records, so now we have all the records under one roof at Rev which is cool.

How has the songwriting changed over the years?

I’m not sure that the way the songwriting, as a process, has changed a whole lot over the years, but obviously we have some new (as in 2+ years, so not super new, ha) members who contributed songs to this release so there is that. Obviously our tastes or influences may change a bit as well through the years, but I think we conciously try to be somewhat cohesive release to release, without being too redundant. I feel this record does a nice job of that.

With new album in hand, will you be hitting the road or playing more shows?

We are playing a couple shows in Oakland in December and L.A. in January. Beyond that we’re hoping to some Midwest/East Coast dates and maybe even Hawaii and Europe. The days of jumping in a van and driving cross-country are behind us though. Just not feasible with everybody’s schedules/lives. Which is ok.

How have your live crowds changed over the years? Outside of just getting older.

I’m not sure the crowds have really changed that I’ve noticed. Like you said, besides maybe getting older, but I’d say there are still plenty of younger kids. We still have an all-ages only policy, when it comes to shows, so I still see a lot of younger people at the shows.

You’ve toured all over in different bands, what has been your favorite memory of life on the road?

I imagine that question would vary from member to member, especially since some haven’t been in the band as long as others, but for me personally it has to be playing shows in Japan. Everything about it was great. The people, the places, the food, everything. I’m sure we’d love to do that again someday if it worked out, but it remains as my favorite trip we ever took. Also, if I had to pick a favorite show ever, it would be the last show of that trip in Tokyo. The best. Japan rules.

Catch Shook Ones at Make.Shift on Nov. 10 with Matriarch and Supercrush. See their social media for more information.