The Co Founder: We Are Family 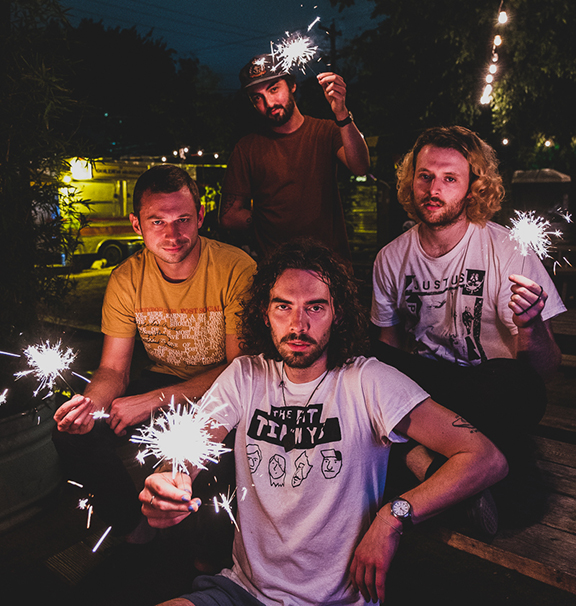 So much happened on this tour, it’s hard to wrap it all together. Even though I’ve been home a couple of weeks now, the trip still seems just as blurry as the exit signs on the interstate at night.

Right off the bat, I’d like to say that touring in The Co Founder with Hayden Eller, Jake Barrow, and Luke Hogfoss is beyond fun and humbling. I feel like we really push each other to be better musicians, and more importantly, better people. I don’t know if there’s another group of people I could live out of a car with for weeks on end throughout the year. Also, touring with the Kevin Nichols crew is always a blast. This was our third tour linking up with them for a few dates, and it’s always a highlight to have them mobbing around the country with us.

If I’m being completely honest, before we started this one, as excited as I was to hit the road again, 40 days seemed like a lot. Not only were we trying to hit the whole country in those 40 days, we scheduled 39 shows in that time span. I’ve toured for longer stretches, but not without regular days off every week. We were thinking that 39 shows in 40 days was going to be our ticket to coming home with some money in our pockets, and our one day off was slated for our favorite stop on the last tour: Austin, Texas. Of course, we didn’t realize Mother Nature was going to essentially force us to take some crucial R&R days.

I’ve toured the South before, and from everyone I’ve met down there, they’re pretty accustomed to the dangers that come with living in hurricane territory. I’m not. Hurricanes terrify me. The last time I toured the South, Hurricane Matthew decided to slam into the Southeast just as we were about to roll through, and we lost three shows. I guess that lightning needs to strike twice, and seeing as I’m somewhat of a bad luck storm charm, we timed our trip to impeccably fall square into the path of Hurricane Florence.

These were some of the testiest days I’ve had on tour. Cancelling shows that you worked hard to book so far from home is seriously one of the worst feelings, and to be honest we didn’t have a clear cut plan as to what we were going to do as we waited for the forecast to come together. What’s more, tour is already very much a “Hurry up and wait” kind of gig, and having to wait out extended days seemed daunting. Luckily, Luke’s Aunt Karen had a warm spot for us high up in the Blue Ridge Mountains of north Georgia, in a town called Ellijay, and we were able to hightail out of Philadelphia a day before the storm hit to skirt around the Carolinas and into Georgia.

This was probably one of my favorite “random” tour stops I’ve ever made. We got to relax and sleep in, out of the storm’s path. We watched Deliverance in the middle of the night right above the river it was filmed on. We got to meet and drink some moonshine with the locals, and most importantly, we got to write a song on the road, which we ended up playing the rest of the tour.

Everything about our time in Ellijay really solidified how I felt (and still feel) about being a touring musician and traveling in a crammed car with my friends. Watching all of them as musicians over the years, I’ve always admired how Luke, Jake and Hayden seem to turn hardship into true and honest creativity. It’s really empowering to be around, and really fun to be a part of. I just want to be around their positive thinking and creative energy all of the time. I consider myself super lucky to have been able to get out of Florence’s path, and to have been able to meet Aunt Karen and turn a potentially terrible time into an unforgettable few days.

There’s no way I can highlight, or even really remember, all of the ridiculous things that happened this time out. Doing some quick math, if the average band that we played with had three musicians, and we played with three other bands a night, we met in the ballpark of 300+ musicians, and that’s not counting the hundreds of interactions we each had with other folks at the shows. We even managed to stumble upon a secret Conor Oberst show in Omaha! I had always joked about seeing him play there, and as tour luck would have it, the stars aligned and we all watched with our jaws dropped as he played a country covers set in his home bar.

It’s moments like these that really make touring for me. Every trip comes with its own unique set of personal goals and challenges, and there is more than ample opportunity for weird side stops or interactions to happen along the way. It’s also just great meeting people across the country (and the world soon because we’re hitting Mexico and Japan!) who share similar passions. It helps remind me that we’re all in this thing together.

As one tour ends another begins. We’re on the road again this month for our vinyl release, which all culminates in Oakland, California in a few weeks! Then we’re off to Japan, Mexico and back to SXSW in March. We’ll be seeing you from the road soon world!