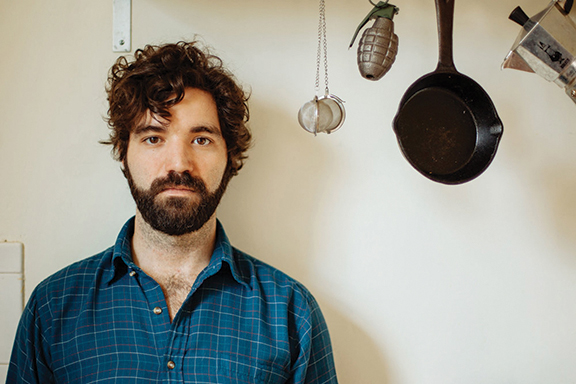 Andrew Duhon has one New Year’s resolution and one only – write enough songs to make a new album before the end of 2019.

Some may call it simple, but this is a musician who pores himself into his songwriting. So much so that it took him four years to complete his most recent debut, False River, which he released last May after diligently working and reworking each and every song on the track for months at a time.

False River details the trials and tribulations of love come and love gone, or, as Duhon described it, “the last letters I’ll ever write to her.” The aptly titled album is  meant to be a metaphor for leaving something  behind and knowing that you may or may not come back around to it again.

“It’s like how the world turns, sometimes we have to leave comfort behind knowing it’s what’s best and that we will return to a feeling of comfort, even if it’s not right away and even if it’s under different circumstances,” he said.” “And it’s also like a river that constantly moves and sways and a piece here or there may break off and become something different but remains still a part of the bigger moving system. It may come back to that original formation and it may not, but it’s allowed to be separate and to be its own ecosystem within that larger ecosystem.”

You see, Duhon writes with such intention, with such detail to the meaning of his words, it only makes sense that it could take him a handful of years to create enough content for an album. But he’s pushing himself to be more productive this year, he said, and that means getting pen to paper.

Growing up in the suburbs of New Orleans, Duhon went on short trips to the French Quarter every once and a while until he graduated from high school and started working as a janitor at an old convent on the edge of the Quarter. It was during this time that he began playing a lot of guitar, busking on corners and spending lots of late nights at open mics, he recalled.

“New Orleans is a city that if you wander around long enough you will find she has things to tell you and things to show you if you’re open to it,” he said. “And there’s cracks along all of the sidewalks because she’s sinking into the gulf and I think that’s part of the charm.”

Much of his inspiration as a songwriter started in a high school English class where he first read Emerson, Whitman, Frost and, of course, Thoreau’s famous quote, “To believe your own thought, to believe that what is true for you in your private heartis true for all men,— that is genius.” This, Duhon said, introduced him to an artistic will in expressing himself in a completely true and uninhibited way by asking himself what it is he really wants to say in his songs. These literary inspirations alongside Duhon’s rusty, soulful voice, sets him up to be one of the most soulful musicians coming out of the south; one who could give those up in Nashville a run for their money if he wished to do so.

Musically, he looked to singer-songwriters such as Bob Dylan, John Townes Van Zandt, Delta Blues artists and others who sang of melancholy sentiments with richly poetic and meaningful lyrics for his musical inspirations. And it’s not hard to see the connection between, say, Dylan’s “Blowin’ in the Wind” and Duhon’s “Comin’ Around”, both of which look for answers in the cyclical nature of life and use metaphors relating to the natural world around us to do so.

Prior to False River, Duhon released his Grammy Nominated, The Moorings, in 2013 (Best Engineered Non-Classical category). He teamed up with bassist, Myles Weeks and drummer, Maxwell Zemanovic to join him on tour while promoting the album. They had been chosen prior to the tour by an agent and there was no agreement that they would continue to play with Duhon after it finished, but the connection was real and the three stayed together in the making of False River. Duhon described Weeks and Zemanovic (who tours with Miranda Lambert) as some of the greatest musicians he has come to know, and doesn’t doubt that they will continue to make work together in the future.

Work that, if all resolutions go according to plan, will be under way by the beginning of next year.

Duhon plays Firefly Lounge on Jan. 8. Follow him on social media for updates.