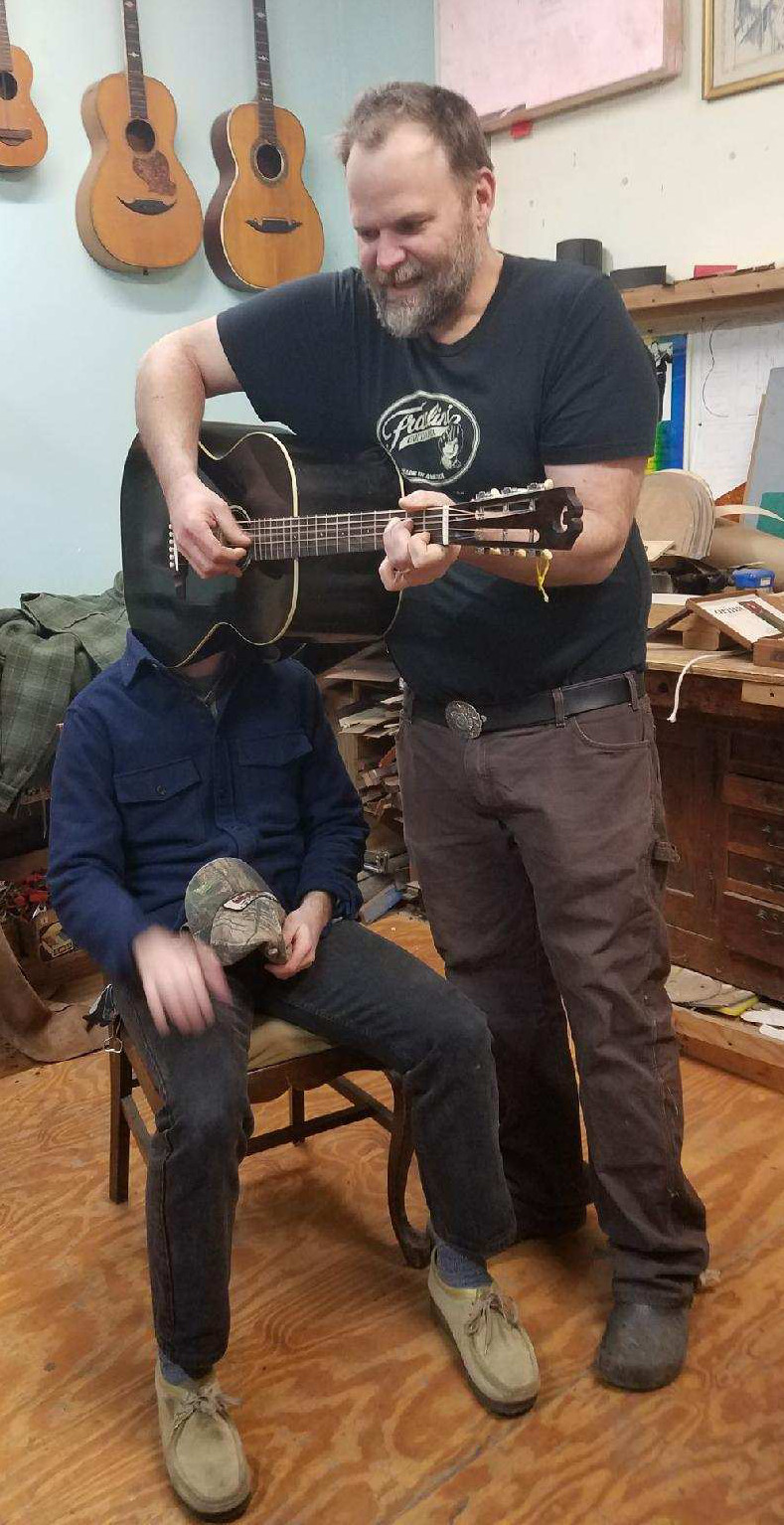 Firelight flickers through a window and casts dancing shadows across the brick street outside. Peek through the window and see a workshop where a 14-year-old boy is carefully scraping a thin piece of maple, pushing a honed piece of steel across the wood, and drawing fine, wispy shavings that fall to the floor around him. On a workbench next to him lie two chisels, a small saw, a few clamps, and in front of that, a violin shaped mold. The boy puts down his steel scraper, examines the maple he’d been working, and then walks to the other side of the shop where an aproned man has just finished clamping the neck on a violin. Behind him, on his workbench are six identical violins. The boy holds up the thin maple rib to show the man, who takes it his his hands, flexes it slightly between his thumb and fingers, holds it up to his lantern light and then gives a quick nod and hands it back. The boy returns to his bench, on his way pulling a hot iron out of the fire. After securing the iron in his vise, the boy quickly dips the maple in a pail of water and then begins to bend it slowly, as it sizzles against the iron’s heat.

This could be a fairly typical scene a couple hundred years ago in a violin maker’s shop. The man at the bench was the master craftsman, and the boy, his apprentice. Apprenticeship used to be a very common and vital part of the trades. Each trade had regional guilds, and they were taken pretty seriously. If you wanted to build furniture in Medieval Europe, you couldn’t just buy some tools, teach yourself, and start selling tables. I mean, you could, but you might find yourself in trouble with the local furniture makers guild. The way to do it was to apprentice, usually from a young age (11-18 years old), and after a number of years move on to Journeyman status. That’s when you start getting paid. Then after years of dedication, and creating a masterpiece, you become a master yourself, taking on apprentices and continuing the tradition.

Two questions I commonly get from folks when talking about instrument making and repair are: “How did you learn to do that?” and “Do you need an apprentice?”  The initial response to the latter is pretty quick and direct. Nope. I do love to share and teach people, but my shop is tiny and I’m usually just too busy trying to keep up with my work at hand. The answer to the first question is a story of a winding path involving, among other things, library books, tin can banjos, a cabinet shop, the road tech to the Doobie Brothers, and a school in Arizona. Come by the shop sometime with a cup of coffee and I’ll tell you all about it. What I want to shine some light on right now is the brief time I got to spend as the closest thing to an apprentice that I’ve ever been.

A couple years after guitar school, I was doing repair work in my garage while still working a day job. I wanted to build more, but had some personal hesitations, and I found myself wanting a mentor/apprentice type situation. That’s when a friend turned me on to Todd Cambio who builds Fraulini Guitars in Madison, WI. He was building just the style of stuff I wanted to get into. Where at school we learned the modern industry standard, Todd was old-school, using hide glue, french-polishing, and more traditional techniques I was hungry to learn about. So I wrote him and asked if he needed an apprentice. His answer was pretty quick and direct. Nope. But we continued an email conversation about instruments and music, and later that summer I traveled to Wisconsin to pay him a visit at his shop. We hit it off great, and at the end of that visit he invited me back to build a few instruments and learn from him. It was my golden ticket.

About four months later I returned to his shop where I spent the winter soaking up all I could, building instruments, studying his techniques, doing repair work on some antique and historical instruments, sharing meals, and playing tunes. Todd was incredibly generous with his time. He had his own pile of projects he was working on, but always stopped what he was doing to explain a process to me. On my end I tried to help out where I could, building a base for his workbench, cleaning, and helping with repair work, but my efforts at payback paled in comparison to the gift I was given. I left that shop with a few more instruments under my belt, and a learning experience that continues to teach me to this day.  The heyday of the craft guilds is long gone, and formal apprenticeships are rare, but in Todd I had found a sort of mentor, and for that I am eternally grateful.

There does exist The Guild of American Luthiers, but rather than an exclusive club, it is open to anyone and mostly an information sharing platform with an excellent quarterly magazine. For anyone interested in beginning their own winding path in lutherie, whether as a mild hobby or a more serious pursuit, I recommend looking into the Guild.  Also, Guitar Player Repair Guide by Dan Erlewine is the book that I wish I found when I first started tinkering on my own guitar, and while it’s not comprehensive, it’s a great place to start.