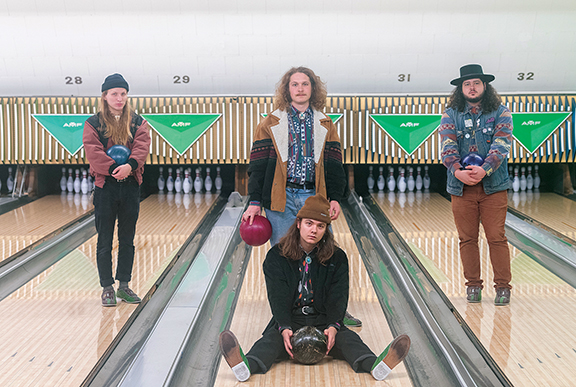 Hello, I’m Sorry is a band that is exactly as endearing as their name suggests. A group of fantastic musicians and friends who are just happy to be heard.

Thoroughly exhausted by their recent tour all the way down to Santa Ana, Seth Little, the founding member of the project recalled, “It started out as a bedroom solo thing, and that’s still how I recorded the album Meloncandy (their latest release), but we’ve definitely been working more on the band aspect. We’ve been planning to do a split EP with our buds Tom Ghoulie, so that will be our fist full band recording.”

While the songs originate from Seth’s bedroom, over time he has grown to include Nate Kahn on guitar and backup vocals, Thomas Hudson on bass, and Zach Sullivan on the drums. They all have very different musical backgrounds and taste, which help contribute to the wonderfully complex and varying style of Seth’s creative output

“I’ll show them the parts that I’ve written, but they are just far better musicians than I am, so I’m always sure to give them a lot of leeway with what they can do… That’s kind of my favorite part about the live process where I take these songs that I wrote and recorded on my own, and give it to my friends,” Seth explained of his current process. “And on top of them just being incredible musicians, they bring a whole element to it that I haven’t ever thought of, which is why I’m excited to start writing in more of a group setting.”

Thomas stated, “This is the first time being a project where someone else is the chief commander of the songwriting, so I get to give a lot of live feedback to the part and it’s awesome that Seth is able to take the feedback and reorient it towards playing live.”

Zach and Nate echoed the thoughts. “It’s nice to be part of Seth’s project where I’m not writing the song and I just play what he needs me to play. It’s kind of nice to shed that responsibility.”

Seth reciprocated his appreciation for the other member. “I sometimes come in with a verse and a chorus, but a lot of the time the song develops as I record it. Then I’ll send the demos to friends and they’ll give me feedback. Like Nate said on the track “Lake Day” that I should bump my vocals up… And it helps to have my friends listen to it and give me an objective view of the music.”

His at-home process of working on the albums gives them a certain sense of cohesion, even though not every song may be in the same exact style.

And Meloncandy very much falls into that camp of being very different from his last several projects. It’s got a fuzzy, tape-laden vibe that makes it sounds like a ghost band playing in the back of a haunted Goodwill (in the best possible way). The titles is a play on words of the after-dinner candies given out at many restaurants around town, and a twisting of the word melancholy, which is a feeling exuded by the album at various times.

“I guess in the recorded aspect, the overarching theme of the new album is to try maintaining hope in the face of things that are really difficult,” Seth explained, when asked about what the listeners should take away from the album. “Aiming to like, improve yourself, but not letting that get you so down.”

You can hear their brand of uniquely detailed rock on Bandcamp, and don’t miss out on their awesome lives shows, including on Jan. 25 at The Shakedown with The Cofounder. Follow them on social media for more information.