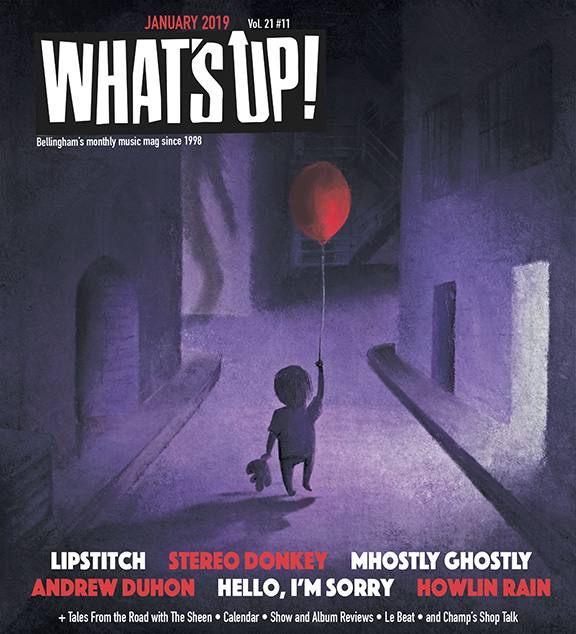 Well hello there friends, how are you all doing these days? I hope you had a pleasant holiday as I did… Lots of family time, which I love. Incidentally, I also love the CBC’s New Year’s Eve programming, which was a lot of fun – I woke up feeling great about 2019 and I pretty much think it’s because of the Canadians.

I’ve had folks ask what’s happening with the mag and, at this point, that’s still TBD. There is some interest in purchasing the mag, but any talk is very much in the early stages. So, come July, mag could be around… or maybe not. How’s that for definitive?

In the mean time, let’s have fun with this definite bit… I’m throwing a seven day pub crawl to celebrate the mag’s 21st birthday! Beginning March 4, we’ll have free local shows at seven different bars over seven days – starting at Red Rum and ending Sunday morning at The Cabin with a songwriters in the round. After that, I’m pretty sure my liver will shut down, but what the hell, you only turn 21 while 48 once! I’ve also mentioned a retirement party, and will let you know the details when that festivity is definitely booked.

Boscoe’s has shut down for now, but Sean and Hannah hope to reopen in a new spot within a few months. Really disappointed to see the town lose this, but think a new spot could really help the long term future of Boscoe’s.

Looks like Middle James has called it a day, as is often the case with young bands! BUT, this one had a special place in my heart, their bass player, Gideon, was the son of Eric Wolfe who was in a ton of bands when I first moved to Bellingham decades ago. I had hoped they’d continue on for awhile, but alas things weren’t meant to be I guess.

Robt Sarazin Blake went on a little tour before the holidays, hitting Seattle, then a few spots in Oregon before settling in at Al’s Den in Portland for a week. Professional musicians, I love them!

Michael Erickson (WMD) has released a three song EP (or single) called “Redolent / Dissolve,” which is streaming in all the normal places. I’ve said it for awhile, absolutely love his music, it’s worth checking out.

Silm are putting out their long awaited latest release and it is epic. So damn good, which you knew it would be (especially with Erik Wallace on drums). You can check it out on bandcamp or in my car while I’m driving around. I drive a Volvo filled with paint and copies of the mag, find me and we’ll listen to it together.

Orpropos have released a new, legit EP and it’s full of glorious, glorious black metal. After all these years I found it so amazing how music churns through – metal bands go, new metal bands come in, same for hip hop, indie, funk. Sometimes it doesn’t feel it, but just be patient and your dreams will come true.

Schemes are busy recording a new EP, so they’re off the radar for a little bit. When’s the new EP coming out? I don’t know… but I’m excited and if we were on social media, I’d have a GIF to show how excited. And it’d be awesome.

By the time you read this, Mount Saturn will have released Kiss the Ring and you’ll know it ABSOLUTELY RIPS. So many riffs, such a killer sound, I’m absolutely loving this record. Also gotta love the cover, which is one of my all time favorites of any local band – so brilliant and couldn’t fit their sound any better. Well done! Their release show is on Jan. 4 with Drown the Mountain and Gallowmaker (that’s a sweet line up).

Analog Brass were in the studio last month recording. No word on when music will be released but you’ve gotta love a local record using brass instruments.

Have you checked out Beautiful Freaks’ new album Cameo Artist? Soooooo good. Really raw, but I love the songwriting which runs the gamut. This is one of those “can’t wait to see how good they are in a year” bands. In the mean time, for now… January of 2019, enjoy their new record.

Speaking of metal from back in the day, Lifeless Form have released Tearing Open Graves, which will pretty much make your skull implode with awesomeness. Love that Jeff of FFA still makes music.

I was really happy to read Boxcutter PNW are carrying on with Kendra Carson on vocals. She was loved by Robby and even filled in with the band when he was battling health issues. According to their facebook post, she was the only unanimous choice of the remaining members. There are some folks who are also keeping NE7 going the best that they can, though it’s been a struggle trying to keep up with all the different things Robby was working on. Stay tuned.

The Meece are recording before Lance and his wife have a baby this month… HURRY UP, THINGS ARE HAPPENING.

Khu.éex’s third album, Héen, will be released soon… you’ve gotta love the vague notion of when it’ll be out, but I just know they have the test pressings and have released their first single. I heard snippets of the album when it was being recorded, back when Bernie Worrell was still playing music in this world and it was mind blowing. Absolutely bonkers – Bernie was playing out of his mind, I can’t wait to hear the whole thing.

Austin from Opropos and Eli Ballis (ex-Red Giant) have teamed up for Ex Nihilo, which will be releasing a new album this month. More metal that slays… the fun part of this little band, Eli lives in North Carolina! It’s like the Postal Service but super black metal! Watch for updates in these very pages. Eli and I go way back and I think he’s the absolute best.

We’d like to send a heartfelt congrats to Brendan LaBotz and his partner Cass Murphy as they welcomed little Quinn into the world on New Year’s Eve. Let the good times roll you three!

Finally, it is with profound sadness we remember Lisa Bolson (aka Bunky Pickweed, aka Patty Melt). I knew Lisa for many years – she was in Clambake way back when and she remained a fixture of Bellingham. I remember, as we first met, she was very kind, honest and spirited. I hadn’t chatted with her in some time – she was someone I wasn’t close to but we’d take time to chat when our paths crossed. Lisa left behind her family and many friends – all stunned and deeply saddened by her passing. Our thoughts are with them, and Lisa lives on in our hearts.

Be safe my friends. We’re all a big family living up in this goofy little town… give those close to you an extra little bit of love this month, and always.