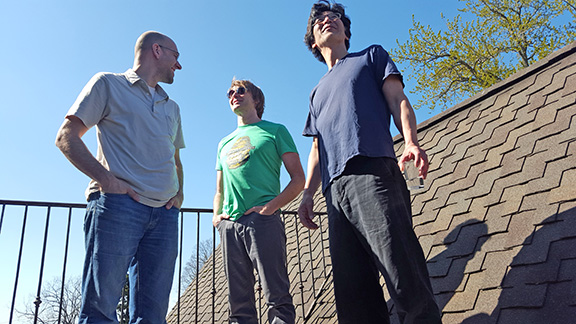 Among the new releases coming out of the Bellingham music scene is the debut EP from Stereo Donkey, a Northwest, surf and exotica inspired record by three long-time musicians who’ve found new life in their new band.

The seeds of Stereo Donkey began with Pat Wickline’s guitar set up – a 1964 Gretsch 6118 and a 1963 bassman amp, both of which he acquired cheap because they were in terrible shape. After seeing Brian Setzer play, Pat realized he might have the same amp and went about getting it fixed, followed by having the Gretsch essentially rebuilt by local guitar wiz Dave Doucet.

“When he was done he handed me a dream, all the woody character of a Gretsch from that era, but totally solid and playable. My life long search for the right guitar was done,” Pat said.

At the time, Pat (who lives in an old church) wasn’t playing in a band minus a group he got together for his annual Church House Halloween party. In 2015, while looking for a drummer he came across long-time local Mike Bajuk playing in the Saltwater Octet at the Sunnyland Stomp.

“It immediately struck me that that guy could probably play rock. Yeah, he was playing jazz really well, but I could see a fire in him in the way he hit the snare.”

After the set, they chatted and Mike was in. For bass, Hiro Yamamoto (ex-Soundgarden) was suggested by local legend, Jeff Braimes. Hiro and his wife had been to the Halloween party the year before.

“I had no idea who he was ‘cause I had only seen him in a Halloween costume, but I said sure, why not.”

Mike, Hiro, and Pat worked on a surf punk instrumental cover of Man or Astro Man’s “Evil Plans of Planet Spectra” during rehearsal and really clicked. “After the rehearsal we spontaneously started improvising a dark surf groove and Kate Yamamoto (Hiro’s wife) said, ‘That’s great – you should start a SURF BAND!!’ And Stereo Donkey was born.”

He added, “A funny thing… afterwards I was talking to Mike and asked him how he liked playing in the party band and he said ‘what’s not to like – I get to play with Hiro Yamamoto!’ Only then did I realize Hiro was from Soundgarden. Between the Halloween costumes and the short hair I hadn’t recognized him, and I’m glad about that. I just met him as a super nice guy and killer bass player – zero attitude.”

Over the last three years, the band has practiced, played the occasional show and woodshedded their music, and enjoyed playing music together. “There’s no statement, no making it in the music business – we let go of trying to make ‘important music,’” said Pat with a laugh, “With this band, we’re doing this thing that feels good for us, that really comes natural for us.”

Last November, the band released their debut album, a six song surf extravaganza. Recorded over a weekend in Pat’s church house, “The room is a fourth member of the band,” he stated, “It has awesome acoustics.” He added, “We were born playing this room, it’s part of our deal.” The overdubs were recorded at Alpenglow Studios with Bill Simpkins, someone who Pat noted they leaned on heavily for input into their songs. “Made a difference for us to say it worked or didn’t work.”

What they produced was a record that not only fit beautiful into the surf and exotica world, but also Pacific Northwest rock history. “The NW garage thing,” Pat said, “it comes really naturally to all of us. It feels like that’s where we’re from, dating all the way back to The Sonics.” He added, “We’re not trying to retro, it’s just a connection to that thing. It feels authentic to us.”

Part of what makes Stereo Donkey so special is their approach to their sound – in many cases surf rock will push the guitar forward with drums and bass in the back, or more recently, bands will push the drums with the other instruments sitting back. It was important for Pat that all three members had an equal voice in the music, especially Hiro who can brings a melodic sound with the bass, breathing new life into the surf sound.

This month the band will head back into the studio for another round of recording with the intention of playing more in Bellingham and beyond beginning this spring.

For more information about Stereo Donkey, follow their Facebook page. Listen to the new album at https://stereodonkey.bandcamp.com/releases.

(The original article misspelled Bill Simpkins name. We apologize for the error).