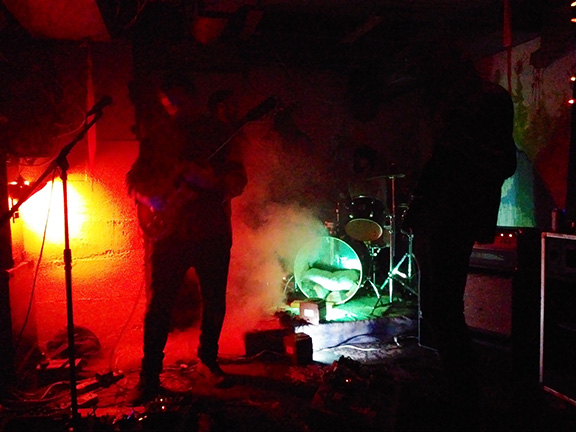 The three most certifiable crazy haired freak members of The Sheen were barreling down a country road through Sumas headed for the border in the well worn green Dodge van filled to the windows with drum kits, amps, instruments, luggage, multiple jars of pickles and the unmistakable smell of nervous sweat. The other two members, sporting day jobs and smart dress to match, were an hour ahead in a nondescript late model vehicle. I was at the wheel of the green Dodge space shuttle and having been harassed at the border in the past while looking much less suspicious than this, I was braced for their string of questions with a carefully composed slew of “Yes sir” and “No sir” lines at the ready. Needless, however, was our exhaustive sweep of the van for contraband and weapons, meticulously prepared and signed letters from the promoters explaining what exactly it was we were to be doing in the country, and the hours spent rehearsing the Official Story. The border officer issued little more than a glance at our passports and a gruff “Welcome to Canada,” without much of a glance at the enormous lump of equipment in the back covered with a tarp.

Upon arriving in Abbotsford, BC it appeared that the thing to do, at least on that particular night, was to get the tires real hot and loud at the corner of road belonging to the Carport Manor where we would be playing that night. I saw a good four or five rear wheel drive cars enthusiastically going sideways around the corner while waiting outside in the rain  for them to unlock the door. More important than that however was the absence of the better half of our rhythm section who were supposedly an hour ahead of us. They did arrive soon after, fresh from the local drinking establishment, sporting thousand yard stares and a rather haggard tone of voice. Apparently their rendition of the Official Story had been deemed suspect and they were subsequently whisked away to be inspected and pried for information. I did not care to ask too much about how exactly they had been inspected and frisked, as the bass player and late model car captain assured me that the Official Story had ultimately held true and that they still had the coveted box of band merchandise safely in the trunk.

Our host, Aaron, started a load of laundry as we were loading in, first asking us if it would be inappropriate of him. Aaron made a few memorable proclamations, one of which was that he would pay any American citizen to vote in the midterm elections. “I’m dead serious man, send me your information and I will pay you to vote.”

The stage was soggy and buckled a bit under both drum kits, but did not give way. “This venue is f#cking leaking!” I shouted as I shoved a discarded drumstick underneath my speaker cabinet to let it sit flat on the damp and warped plywood. A spectacular venue, however leaky it was. We stayed with some very hospitable young Canadians who were eagerly blazed on newly legalized Canadian marijuana. I slept on a smooth black leather couch in the basement but unfortunately was still privy to the log-sawing snores coming from the couches upstairs.

Without the crutch of cellular data in this country I had to rely on my thick sheaf of laser printed directions prepared by Mr. Benz, bassist in chief and pilot of the late model vehicle. In a roundabout fashion these directions did eventually arrive me at the Tsawsassen ferry terminal the next morning with the destination being Vancouver Island. A two hour wait ensued, and the sense of existential dismay in the van was palpable with each frequent announcement over the P.A. that there was to be absolutely no smoking allowed on the terminal or any of the ferry property. Our drummer left the van, ostensibly to go to smoke in the bathroom, and arrived back as we were ready to board the vessel. A four layered behemoth, I immediately became separated from the rest and wandered through a seemingly endless maze of airline-esque passenger compartments, gift shops, and eateries reminiscent of a small town casino. Going up a combination of elevators and stairs I reached the weather deck where I watched the small islands pass by as the ship sailed through a channel that seemed impossibly narrow. The rest of the band and I quickly abandoned the scenery to visit the onboard arcade. I was disinterested in the driving games after already having already spent enough hours behind the wheel of a top spec cargo van and went to go read magazines in the gift shop.

The directions to the Copper Owl, the venue for the night, proved to be inaccurate or incomprehensible to the navigator and after circling around the block for several minutes with my breakfast of pickles sitting poorly in my stomach, the directions were abandoned when we realized the thing was a just giant mass of copper with an owl on it. Impossible to miss.

Despite being on the so called “Island Time” the early show adhered to an extremely tight schedule. Playing in a sunken stage that apparently used to be an oblong hot tub, some particularly crackly amplifier problems spiced up our set a bit. Crosss, our hosts for the night, hit their climax of haunting distortion and finished out just before the Friday night DJ set took over. Being through with a successful Friday night gig at 9 p.m. I was slightly perplexed, but also presented with an opportunity for a night out on Halloween weekend in this new city.

The first stop was Logan’s pub where our host was handed a wad of bills by a homeless person outside and was persuaded to buy him something from the corner store. A brief negotiation with the doorman to accept American dollars got us in. I swam my way through the crowd to the bar, ordered an overpriced beer and took the lay of the land. The band in there seemed to be dressed as members of ZZ Top with enormous fake beards and playing some sort of bizarre space rock. I swam back to the front, took a seat and glanced at the television. It showed that the Red Sox were in the 16th inning at around 1 a.m. eastern time. The throbbing mass of patrons seemed unperturbed by all of this. I was not prepared to process all of the information and decided then that I had to get out.

Our host later led us to a house party where I absorbed some of a well curated DJ set of gothic rock and synthwave in a filthy living room packed with costumed locals. After another night of excellent Canadian hospitality we set off to Nanaimo where the finale of this short tour was happening.

Armed with cups of Tim Horton’s coffee (it was not very good) the drive through the mountains went by quickly. We rendezvoused with the Shearing Pinx in Nanaimo, who were to be our hosts for the night, and entered their home to find a veritable feast being prepared while records played loudly and libations began to flow. “Island Time” began to take full effect. The show was taking place at a house down the block sometime later that night and no one seemed very concerned with how or when we were going to get there. After several bottles of homemade rhubarb wine and a dive through one of the largest and best record collections I’ve ever seen, we ate the entire feast, a legendary meal, alongside a gathering crowd of musicians, friends, and neighbors.

At some point much later, the collective decided it was high time we left for the venue and headed down the street to Crace Mountain. This was a complex complete with a basement venue and a tent canopy outside that periodically shed buckets of rainwater. I was assured that there would be no trouble from the police that night because the local Hell’s Angles chapter controlled the neighborhood. “None better to defend rock and roll than that bunch,” I thought to myself. A raunchy and surreal puppet show had begun in the room adjacent to the stage as people began trickling in. One of the puppets tipped back a bottle, draining it, and then sat on it and swallowed it whole with her puppet body while moaning and seemingly foaming at the mouth.

We took the stage after a couple of noisy local acts followed by another set from Crosss and played a particularly memorable show complete with artificial fog, strobe lights, and several confused shouts of “What the f#ck!” during breaks in the music. Shearing Pinx played after us and brought an incredible intensity to the basement that I felt like I had been missing all my life. We left all of our gear set up in the basement, presumed to be safe under the wing of the Hells Angels, and walked back to where we had come from with the hope of leftovers and the expectation of an enormous party. Both items were fulfilled and I had a pretty awesome time. These Nanaimo characters were true 24 hour party people and kept the Motown records and enthusiastic talk going long after I crawled into my sleeping bag downstairs around 6 a.m.

A morning shot of tequila was offered and accepted while I watched a “casualty of the night” stumble into the room and scarf down a plate of bacon while babbling something indiscernible to me. On the way out of town we stopped at a record store that advertised itself as “Hard to find, never open” and blew the last of our Canadian currency on wax.

After bidding our new friends goodbye I drove as slowly as I could to the ferry terminal dealing with the crushing disappointment that we didn’t have another show booked and had to go home back to operating on mainland time. A ferry, quick stop for gas, and another wave through at the border later we were back in the United States for better or worse.