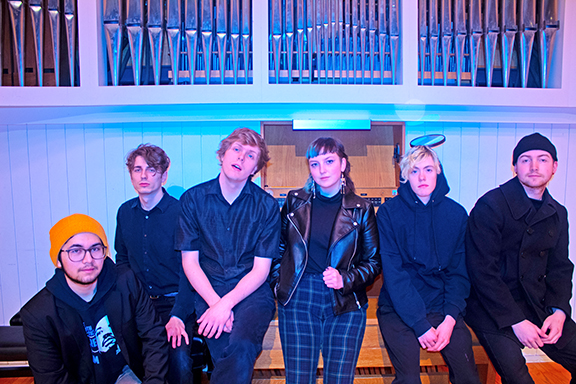 Every few years, Bellingham’s music scene experiences a wave of new bands – ones that for whatever reason begin to coalesce as freshmen in college, evolving as musicians and songwriters until their junior and senior years becoming musical forces. In the latest wave of bands lies Beautiful Freaks, a duo (expanded to six piece for shows) who demonstrate the next wave is here and local music fans should be very excited.

Peter Bryson and James Bonaci began playing music together when they were 13  years old – the two and a rotating cast of bass players latched onto the underground and punk rock scene in the Seattle area. Just kids having fun, they began to take things more seriously their senior year in high school, recording their demo Electronic Astronaut as a way to get shows in Bellingham, where they’d be attending college.

Unfortunately, even the best plans often don’t work out as the live aspect of the band took a secondary roll for the two – Peter focusing on school while James was recovering from a bad back injury. “I was still injured so couldn’t play and just focused on writing,” James noted. They did play live when time and health allowed; Razzleberry’s Augie Ballew was in the band at the time and they performed at different DIY venues in the Bellingham area.

In late 2017, though, with Joey Schmidt in the band, Peter and James focused on the project, as well as setting up a recording studio (Play Along) and a house show venue (Luigi’s Mansion). “That was the start of us getting together and starting to have the whole thing come together,” James stated.

Last July, Peter and James began recording their full length debut, Cameo Artist. Unlike recording their demo a couple years prior, which was done in a studio, the duo, along with Joey, recorded everything at home using a cheap mixing board and a couple of mics. Steeped in the DIY tradition, Beautiful Freaks took the same approach to their recording. “It was very much crash and burn course – we were really doing it DIY on this one,” stated James, adding, “I think it made the recording environment a lot more personal.”

For the two, the learning process was just as important as the recording itself – they wanted to learn how sound worked, how equipment worked and how to record using very little.

“We all grew a lot,” stated James. “It was a learning experience – this isn’t going to be great but we’re gonna learn how to do shit. If we make it work we’ll be able to do it way better next time.”

After the basic pieces were put together, they brought in longtime friends Maxwell Lemke to do all the brass and Meg Hall to add vocals. After a couple of months, they went to the task of mixing which turned into a challenge in itself – everything bled and was, to some effect, an audio wash. But, thankfully, Joey was there to save the day. “If we hadn’t had Joey I don’t know what we would had done,” James said with a laugh.

At the time, life was exceptionally hectic for the band with school for the duo as well as Joey plus James’s work on AS Pop.

“It was crazy,” exclaimed James. “The chaos translated into the album.”

The end result as a remarkably charming, well written, honest and raw indie pop and rock record. Full of bursts of brilliance and elements of failure, the nakedness of Beautiful Freaks’ approach made even the flaws engaging. “It’s about all the little mistakes and little moments on the record that are fun to look back on,” James stated.

Cameo Artist was released last December and the band is now adding elements and members to their live set.

On April 27, they are scheduled to play on Seattle’s KEXP. Beyond that will include more shows, writing and exploring. “We’re definitely gonna try and see where else we can take our musical prowess,” he said.

See the Beautiful Freaks on March 8 at The Shakedown as part of What’s Up!’s 21st Birthday Celebration, with Hello I’m Sorry, Glitchlette, and LipStitch. Also catch them March 15 and March 24 at  Karate Church. Follow the band’s Facebook page for updates.